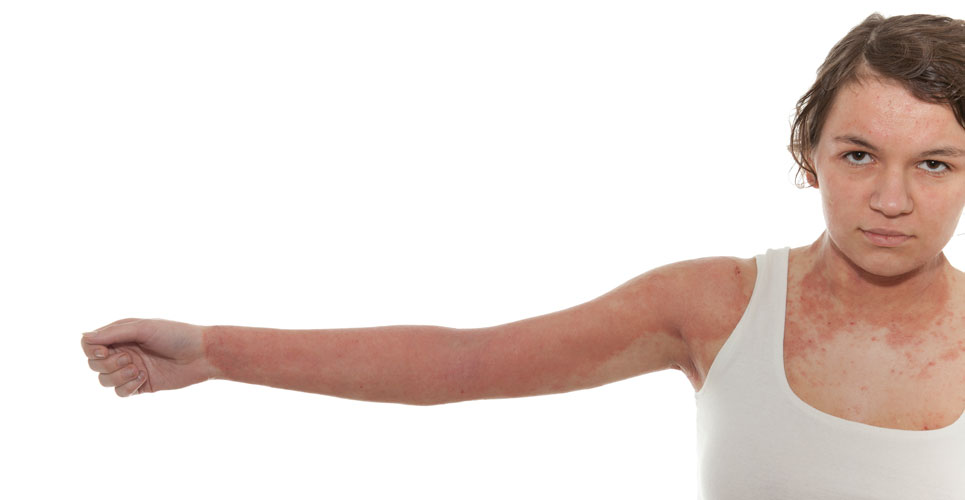 Atopic eczema is a chronic, inflammatory skin condition that is a common problem in both children and adolescents. Studies suggest that the condition affects 10 to 20% of adolescents and that it exerts a negative effect on the quality of life. Though the pathophysiology has not been fully elucidated, it has been established that the tyrosine kinase pathway, which relays signals from cell surface receptors, plays an important role in immune-mediated disorders such as atopic eczema. One such group of cytoplasmic kinases is the Janus protein family and is a critical factor in the normal transmission of cytokine and growth factor signals. Inhibitors of the Janus kinase (JAK) pathway have been used in the management of inflammatory diseases such as rheumatoid arthritis but are increasingly being used for the treatment of other immune-mediated diseases. One such inhibitor is Abrocitinib which has been shown, as a mono-therapy to improve disease severity in adults and adolescents with atopic eczema. However, the effectiveness of Abrocitinib in combination with topical therapy has been less well studied.

This was the purpose of the JADE TEEN study, which was an international phase 3 trial conducted in several different countries by a team from the Rady’s Children’s Hospital, San Diego, Department of Dermatology and Pediatrics, University of California, US. Eligible patients were aged 12 to 17 years with moderate-to-severe disease, assessed in terms of an investigator’s global assessment (IGA) score of > 3 and an Eczema area and Severity Index (EASI) score > 16. Pruritus was assessed using the peak pruritus numerical rating scale (PP-NRS), which measures itch severity on a 0 – 10 scale, where 0 = no itch and 10 = worse itch imaginable and included patients were required to have a PP-NRS score of > 4. Participants were randomised 1:1:1 to oral abrocitinib 200 mg, 100 mg or placebo plus topical therapy for 12 weeks. Permitted topical treatments included emollients, low and medium-potency topical steroids, topical calcineurin inhibitors or crisaborole. The primary outcome was the proportion of patients achieving an IGA score of 0/1 (clear or almost clear) and an improvement of greater than or equal to 2 grades on the IGA score and/or and EASI75 (i.e., 75% improvement in disease severity). A secondary outcome was a 4-point improvement in PP-NRS from baseline at weeks 2, 4 and 12.

The authors concluded that abrocitinib in combination with topical therapy was an effective and safe treatment option for moderate-to-severe atopic eczema in adolescents.