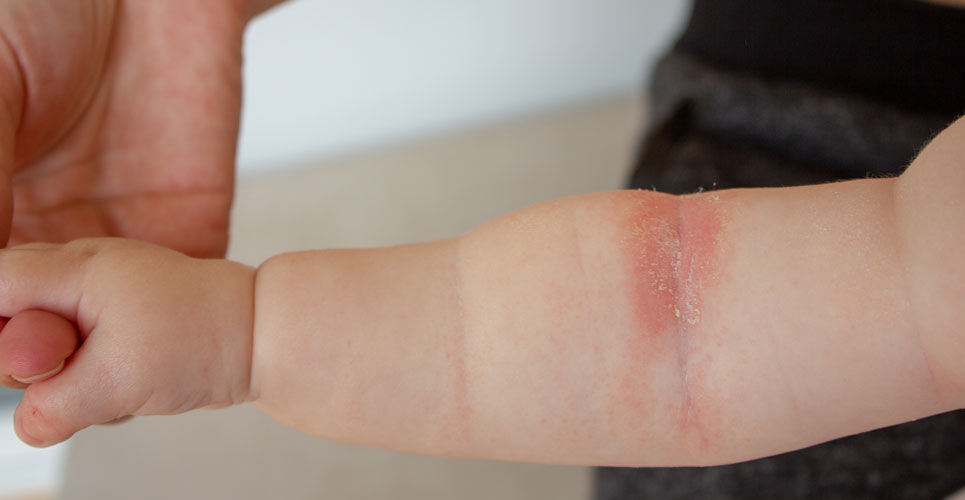 Dupilumab effective in children under six with atopic eczema

While dupilumab is currently licensed for moderate to severe atopic eczema for children from 6 years of age, the drug also appears to be effective in children under 6 according to the findings of a randomised, double-blind, placebo-controlled trial by US researchers.

Atopic eczema represents a common childhood condition with a global real-world prevalence study finding that the 12-month prevalence ranged from 2.7% to 20.1% across countries but that severe disease was generally less than 15%. Dupilumab is a human monoclonal antibody against the interleukin-4 receptor alpha, inhibiting the signalling of interleukin-4 and interleukin-13. The drug has previously been shown to be effective in adults with moderate to severe disease, leading to a score of 0 or 1 (clear or almost clear) on the Investigator’s Global Assessment and a reduction of 2 points or more in their score from baseline at week 16, in 36% who received dupilumab every other week and in 36% who received dupilumab weekly. As mentioned earlier, whilst licensed from age 6, to date, there is limited data on the effectiveness in children under 6 years of age apart from one phase 2, open-label study, which found that a single-dose dupilumab was generally well tolerated and substantially reduced clinical signs/symptoms of eczema.

The present study was the first randomised, placebo-controlled trial of dupilumab in children as young as 6 months old. The US team recruited children aged 6 months to under 6 years with moderate to severe atopic eczema (investigator’s Global assessment, IGA score of 3 – 4) with an inadequate response to topical corticosteroids. These children were then randomised 1:1 to either subcutaneous placebo or dupilumab 200 mg (body weight > 5 kg to < 15 kg) or 300 mg (> 15 kg but less than 30 kg) every 4 weeks in addition to a low-potency topical corticosteroid (hydrocortisone acetate 1%) for a total of 16 weeks. The primary endpoint at week 16 was the proportion of patients who achieved an IGA score of 0 or 1 (indicating that their skin was either clear or almost clear). For the secondary endpoint, the team assessed the proportion achieving an EASI75, i.e., a 75% improvement in their eczema area and severity index also at week 16.

Dupilumab and improvement in disease severity

A total of 162 children with a mean age of 4 years (61% male) were randomised to either dupilumab (83) or placebo. Among those assigned to dupilumab, 76% had an IGA score of 4 and both groups received topical hydrocortisone 1%.

A similar proportion of patients had at > 1 treatment-emergent adverse event (64% vs 74%, dupilumab vs placebo).

The authors concluded that dupilumab with concomitant low potency topical steroids significantly improved disease severity compared to placebo in children under 6 years of age and that the drug was well tolerated.