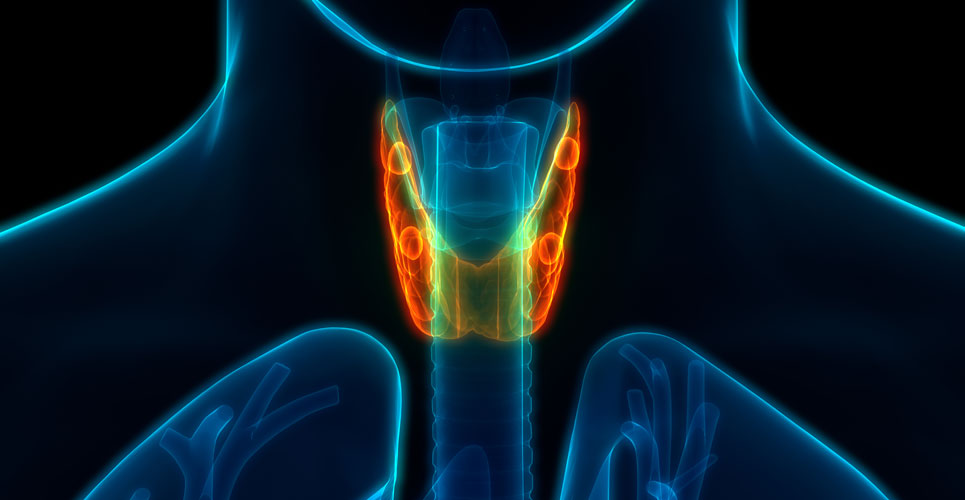 New guidelines will improve treatment for patients with hyperthyroidism

Radioactive iodine is to be recommended as the frontline treatment for patients with thyroid gland overactivity caused by conditions such as Graves’ disease, following an evidence review led by University of Birmingham, UK researchers.

Hyperthyroidism is a condition in which the thyroid gland produces excess amounts of thyroid hormones. Affecting more than 1.5 million people in the UK, it can lead to a range of symptoms including weight loss, nervousness, irritability, heat intolerance, heart racing, tremor and muscular weakness. The most common type of hyperthyroidism is Graves’ disease, a condition where the body’s immune system mistakenly attacks the thyroid gland, triggering over-production of thyroid hormones.

A team of researchers in the University’s Institute of Applied Health Research have been working with the National Institute for Health and Care Excellence (NICE) to review the evidence on current treatment guidelines for the disease.

Current recommendations are to treat patients with thionamides, and in the UK and Europe radioactive iodine is often only given if they suffer a relapse after this treatment. This is due to safety concerns over potential adverse effects of radioactive iodine such as worsening eye disease, and development of secondary cancers.

Research led by the Birmingham researchers has shown that radioiodine is a safe treatment and results in improved cardiovascular outcomes for patients with hyperthyroidism.

The NICE independent guideline committee surveyed clinical and economic evidence to conclude that radioactive iodine was the most effective treatment for the condition, curing 90% of cases. They also concluded there was no evidence of a clinically important increase in cancer diagnoses or deaths between people treated with radioactive iodine and healthy controls.

Dr Kristien Boelaert, who led the guideline committee, says: “There has been uncertainty in the UK about the best treatment for hyperthyroidism despite radioactive iodine being the most common first line treatment for this condition in the US. We are very pleased to have been able to work with NICE to provide clear new guidance which we hope will improve outcomes for patients with this condition.”

Patients treated with radioactive iodine take single tablet which contains iodine and a low dose of radiation, which is absorbed by the thyroid. After taking the treatment patients are advised to avoid prolonged close contact with children and pregnant women for a few days or weeks and avoid getting pregnant or fathering a child for several months. The treatment is likely to lead to an underactive thyroid gland which will require ongoing treatment with thyroid hormone tablets.

Be in the know
Subscribe to Hospital Pharmacy Europe newsletter and magazine
Subscribe
Share this story:
RELATED ARTICLES
Takeda and Lundbeck announce the submission for vortioxetine
Janssen launches once-daily, fixed-dose combination REZOLSTA® tablet for the treatment of HIV
Adding a PPI improves glycaemic control in diabetics
Synaptic density reductions correlate with cognitive scores in Alzheimer’s disease
Poor mental health both cause and effect of school exclusion