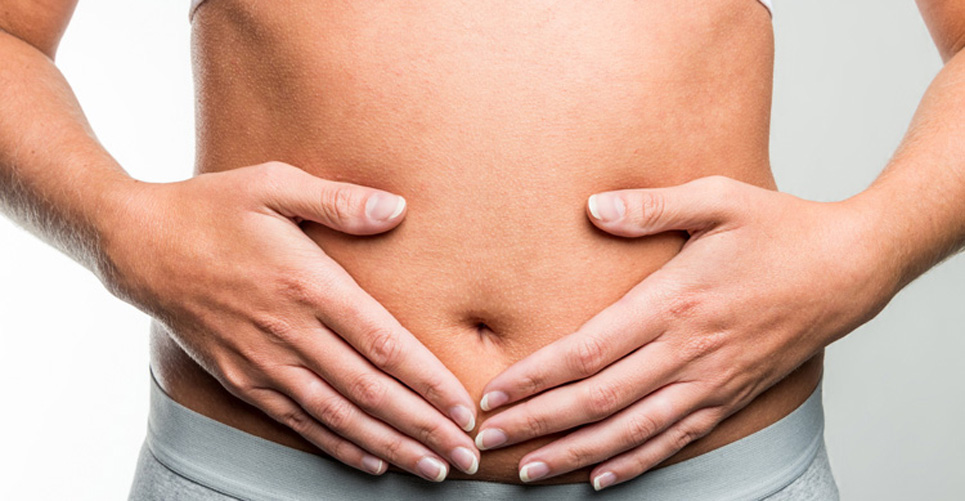 Crohn’s disease is an inflammatory disease, primarily of the gut, although the eyes, joints and skin can also become involved. Symptoms include abdominal pain, diarrhoea, weight loss and oral ulceration. The inflammation results in anaemia, commonly due to iron deficiency. The cause of the uncontrolled inflammation is as yet unclear, although a genetic predisposition, increasing the individuals’ risk of the disease, underlies its development. Within the gut, the disease is characterised by patches of inflammation, involving the full thickness of the bowel wall, resulting in strictures, damage to the mucosal surface and the formation of abscesses and fistulas between the bowel, skin and other organs (see Figure 1). Therapy for Crohn’s disease consists of a variety of approaches aimed at reducing the level of inflammation. However, in some cases, surgical resection of severely affected areas is required.

Discussion
The medical therapies for Crohn’s disease can be roughly divided into five groups, as outlined in Table 1. The role of medical therapy in Crohn’s is twofold. The first is to treat the symptoms caused by the disease; the second is to prevent the development of complications that would require surgery. This becomes important as repeated bowel resections, reducing the length of bowel available to nutrient absorption, increase the risk of needing supplemented diets or parenteral nutrition.

The role of the 5-ASA drugs is well defined. Release modification allows targeting of the small intestine or the colon depending on the area affected by the disease. There is strong evidence that 5-ASA drugs reduce relapse rate in Crohn’s, assessed both endoscopically and symptomatically. (1) Care has to be taken, however, to monitor renal function on these drugs, as 2% of patients will suffer renal toxicity of some form.

Dietary modification is more commonly utilised in children than in adults, with the aim of normalising growth and achieving disease remission. Antibiotics, notably ciprofloxacin and metronidazole, can improve symptoms in some patients. Metronidazole certainly demonstrates an anti-inflammatory effect as well as its antibacterial function and has a role in colonic disease and perianal fistulation. Ciprofloxacin, despite studies in vitro suggesting an anti-inflammatory role, probably improves symptoms by its antibacterial action.

Suppression of the immune response makes up an important part of the induction and maintenance of remission in patients with Crohn’s disease. Steroids exert their action via downregulation of a series of proinflammatory mechanisms, notably cyclo-oxygenase and interleukin synthesis. As a result they remain the mainstay of medical therapy for relapse of the disease. They may be used as oral or topical preparations, the latter providing good therapeutic effects with a marked reduction in absorption into the systemic circulation. Newer drugs such as budesonide provide useful treatment with little systemic absorption.

Azathioprine, and its metabolite 6-mercaptopurine, have an important role in the therapy of Crohn’s disease. They will induce and maintain remission in 75% of patients and allow reduction and often cessation of steroid therapy.(2) Some data show that these drugs also improve fistula-closing rates;(3) however, the response is slow, taking 3 months to improve symptom and endoscopy scores of disease. Care must be taken to monitor the patient for symptoms of bone marrow suppression, notably leucopenia and anaemia.

Methotrexate, a folate antagonist, has recently been shown to maintain remission (65% versus 39% placebo arm) after 40 weeks of treatment.(4) Concomitant therapy with folic acid reduces the risk of haematological complications, and the doses utilised in the controlled studies (15mg per week ­intramuscularly) do not put the patient at risk of liver toxicity. Oral therapy can be initiated in those shown to respond, but absorption can be variable.

Cyclosporin was suggested to induce rapid remission in early reports, but this is not borne out by large controlled trials. Indeed, the largest study indicated that symptom scores were worse in the treatment arm than the controls.(5) It may have a role in fistulating disease.

Cytokine modulation and Crohn’s disease
Over the last 10 years, the leucocyte–epithelial interactions in Crohn’s disease have been delineated in much greater detail. The importance of tumour necrosis factor alpha (TNFalpha) in the inflammatory process has been defined, providing a novel target for therapy. The first drug to utilise this was infliximab, a chimeric mouse–human antibody raised against the TNFalpha receptor. This has been shown to induce remission, as measured by symptom scores and endoscopic appearance, in 40–60% of patients;(6) however, this remission is not sustained unless repeated courses are given. The role of this drug is therefore confined to severe unresponsive disease and fistulating disease as an attempt to induce remission and closure of fistulation while other immune modulation is used to maintain this response.

Other cytokines have more recently been identified as playing an important role in the pathogenesis of Crohn’s disease. Interleukin-18 (IL-18) is up­regulated in intestinal lesions, whereas interleukin-10 (IL-10) is relatively underexpressed. Interleukin-10 has been tried in Crohn’s with some evidence of improved response, but further data are needed before its role can be determined.(7)

Conclusion
The increased understanding of the inflammatory mechanisms at work in Crohn’s disease has provided a number of novel routes for drug development, with the targeting of specific cytokines providing mechanisms of action. However, as yet there are only limited indications for their use. Infliximab remains the only drug to have shown clinical benefit in severe resistant disease and fistulating disease, but long-term therapy has a pronounced financial implication. It seems likely, however, that further efforts at direct cytokine modulation will bear fruit.

Overall, the main additions of the armoury of medical therapies for Crohn’s disease remain the immunomodulating drugs, notably methotrexate, while the mainstay of therapy remains 5-ASA drugs and steroids, with azathioprine as a steroid-sparing agent.