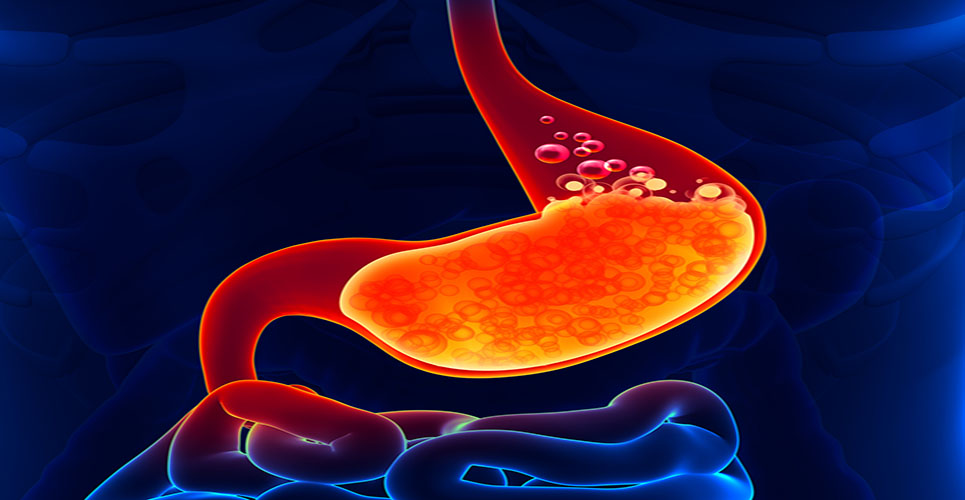 The proton pump inhibitors (PPIs) are widely prescribed for the treatment and prevention of common upper gastrointestinal conditions, such as gastro-oesophageal reflux disease (GORD), Helicobacter pylori (HP) eradication and peptic ulcer disease. Studies are ongoing to investigate the role of the PPIs in the prevention of peptic ulceration, treatment of upper gastrointestinal bleeding and Barrett’s oesophagus. The availability of several new PPIs has enabled us to consider differences in drug interactions, safety data and economic factors when choosing a PPI. The greatest clinical experience is with omeprazole. However, it is likely, but not certain, that much of the information regarding omeprazole is applicable to other PPIs.

Physiology of acid secretion
Hydrochloric acid (HCl) is produced in the fundus of the stomach by parietal cells. These cells utilise a H(+)–K(+) ATPase (the proton pump) to secrete hydronium ions (H(3)O(+)) against a concentration gradient to maintain a luminal stomach pH of between 1.5 and 5. Up to 30mmol of HCl can be secreted per hour. Gastric acid secretion is stimulated by the anticipation or presence of food in the stomach and is also subject to a circadian cycle, with peak basal acid production occurring at night. Gastric acid secretion is also controlled by paracrine, hormonal and neural pathways. The parietal cell has receptors for histamine, gastrin and acetylcholine. These all stimulate acid secretion. Low intraluminal gastric pH and somatostatin inhibit the secretion of gastrin. Somatostatin is released from the gastric fundus, antrum and duodenum. Acid secretion is also affected by the presence of HP infection.(1)

Mechanism of action
PPIs are prodrugs. They are taken orally before food, as they are susceptible to acid degradation. The PPIs are absorbed at the active parietal cell canaliculus, where they are protonated, leading to loss of membrane permeability and conversion to active drug. The resulting sulfenic acids and sulfenamides are able to covalently inhibit the gastric H(+)–K(+) ATPase (proton pump). PPIs are metabolised in the liver and excreted in the urine.

Therapeutic use of PPIs

HP eradication
HP is the causative agent in the majority of peptic ulcerations and is implicated in the pathogenesis of gastric cancer. Infection can be successfully eradicated in over 90% of patients with a single-week regimen of a PPI and antibiotics (usually two of the following: amoxycillin, clarithromycin or metronidazole). Eradication regimens using a PPI are more successful than using a H2A. All the available PPIs are equally effective, and local HP antibiotic resistance and antibiotic side-effects remain the major factors affecting choice.(7)

Dyspepsia
Dyspepsia is a common diagnosis; however, its aetiology is uncertain. The roles of HP infection, abnormalities in gastric acid secretion, and disordered gastric motility in the development of dyspepsia remain uncertain, leading to the development of two strategies. In the “Test and Treat” strategy, dyspeptic patients under 45 years of age, with no alarm symptoms (weight loss, jaundice, anaemia, haematemesis, dysphagia or abdominal mass), or risk of gastric or oesophageal malignancy, can be tested for HP infection noninvasively and treated in the primary care setting. Patients over the age of 45 years and those with alarm symptoms should be referred for endoscopy. Patients who do not require endoscopy and are HP-positive should receive HP eradication. Patients who do not require endoscopy and are HP-negative can be treated symptomatically with either an antisecretory agent, such as a PPI, H(2)A or prokinetic agent. In the alternative “Test and Endoscope” strategy, all HP-positive patients, plus those with alarm symptoms and those over 45 years, receive early endoscopy. The data regarding which strategy is optimum is still evolving, although it favours “Test and Treat”. PPIs may be more effective than prokinetic agents for patients whose predominant symptom is epigastric pain.(8,9)

Gastro-oesophageal reflux disease
GORD is primarily a disorder of gut motility. Incompetence of the lower oesophageal sphincter leads to the oesophagus being exposed to the contents of the stomach. Acid is believed to be the essential factor responsible for both the symptoms and mucosal damage associated with GORD. GORD symptoms and oesophageal mucosal injury correlate with duration of acidic (pH<4) stomach reflux. Studies also suggest that the oesophageal mucosal damage caused by the acid may be potentiated by the presence of bile and pepsin.(10) PPIs are the mainstay of medical therapy for GORD. Their ability to profoundly suppress gastric acid production enables oesophageal healing to occur in the majority of patients. If PPI therapy is stopped most patients will eventually develop a recurrence of symptoms and accompanying mucosal injury.(11) Patients with severe mucosal injury or oesophageal stricturing should therefore continue indefinite PPI acid suppression. For patients with milder disease, symptoms alone can be allowed to dictate the requirements for intermittent or continual maintenance PPI therapy. PPIs are superior to H(2)A in the treatment of acid-related oesophageal disorders.(12)

Patients with Barrett’s oesophagus may benefit from indefinite PPI acid suppression.(13,14) This may reduce the likelihood of further oesophageal mucosal damage caused by the reflux of gastric acid and duodenal bile and pepsin, heal concurrent oesophagitis and prevent oesophageal stricturing.

Gastric ulcers
Unlike duodenal ulcer, HP infection is associated with only 50–60% of gastric ulcers. Gastric ulceration is commonly due to NSAIDs. Malignancy also needs to be carefully excluded. Treatment of gastric ulcers involves withdrawal of NSAIDs if possible and a prolonged course of PPI therapy until repeat endoscopy has confirmed healing and excluded malignancy (usually at six weeks). In the absence of continued NSAIDs therapy, maintenance PPI therapy is not normally required after confirmation of successful HP eradication and endoscopic confirmation of healing.(20) Gastric ulcers can also be healed by PPI ­therapy for patients who cannot stop NSAIDs.(21)

Prevention of NSAID ulcers
Only 1–4% of patients who take NSAIDs will develop serious gastrointestinal complications. Those most likely to develop clinically significant NSAID ulcer disease are those with previous peptic ulcer disease, old age and concurrent steroid or anticoagulation treatment. In these patients, consideration should be given to preventive strategies. PPI therapy is effective in the prevention of both gastric and duodenal NSAID-associated ulceration and superior to placebo, misoprostol and ranitidine.(20,22)

Acute gastrointestinal bleeding
Both H(2)A and PPI therapy have been used to treat patients with upper gastrointestinal haemorrhage. A meta-analysis of H(2)A trials suggested reduced referral for surgery and mortality rates with H(2)A therapy.(23) Patients with gastric ulcers appeared most likely to benefit. Oral and intravenous PPI therapy has been shown to reduce further bleeding and the need for surgery after endoscopic therapy for patients at high risk of rebleeding.(24,25) Mortality was lower in the PPI-treated group compared with controls, although not statistically significant in either study. PPI therapy should be considered for patients with significant upper gastrointestinal haemorrhage only after careful clinical assessment and endoscopic therapy.

Safety
Large numbers of patients are likely to receive lifelong treatment with PPIs. Concerns arose when rats developed enterochromaffin-like tumours following long-term PPI treatment. This was attributed to the high gastrin levels that occur during profound acid suppression. Recent studies have shown that long-term PPI therapy appears to be safe and effective.(26) Smaller and shorter studies reported similar reassuring outcomes in pregnant women and children treated with PPI therapy, although caution is clearly still required in these groups.(27,28)

Which PPI?
Broadly speaking, all PPIs (omeprazole, esomeprazole, lansoprazole, pantoprazole and rabeprazole) are potent, effective and safe.(29) They differ slightly in terms of drug interaction profile through their ability to induce the cytochrome P450 system (and thus have the potential for interaction with other drugs such as warfarin, theophyllines, benzodiazepines and phenytoin). Both warfarin and phenytoin levels may be increased by omeprazole, while esomeprazole does not interact with warfarin but may increase phenytoin levels. Rabeprazole and lansoprazole have theoretical but probably not clinically significant drug interactions related to CP450, while pantoprazole has the least effect on CP450.(30,31) This different profile may on occasion influence the selection of a specific PPI. For those patients experiencing side-effects on one PPI it is worth considering switching to another agent, although recognising that many side-effects (such as headache and diarrhoea) are probably class-related and are shared by other family members.

Guidance from the National Institute of Clinical Excellence (UK) differentiates between PPIs only on the grounds of price and accepted indications.(29,32) Thus, as long as the PPI is licensed for the given situation (and licences are being expanded for most PPIs), then price will determine the most appropriate PPI, and this is largely determined by local and national market forces. The possible exception to this in the future may be the use of esomeprazole. Unlike other PPIs, this is not a racemate but contains only the S-isomer (more active) of omeprazole; as such it is likely to have a greater effect with fewer side-effects. In initial studies the acid suppression with esomeprazole is greater than that achieved with omeprazole,(33) which has led to licensing it for use in an “on demand” regimen in GORD, whereas all other PPIs are licensed for regular dosage regimens. Furthermore, it appears that esomeprazole may have higher and quicker healing rates than other PPIs.(34)

Conclusion
PPIs are highly effective and safe drugs and are the acid- suppressing treatment of choice for GORD, HP eradication and peptic ulcer disease. PPIs may benefit patients with Barrett’s oesophagus and selected patients with upper gastrointestinal bleeding. At present, cost largely determines the choice of PPI.