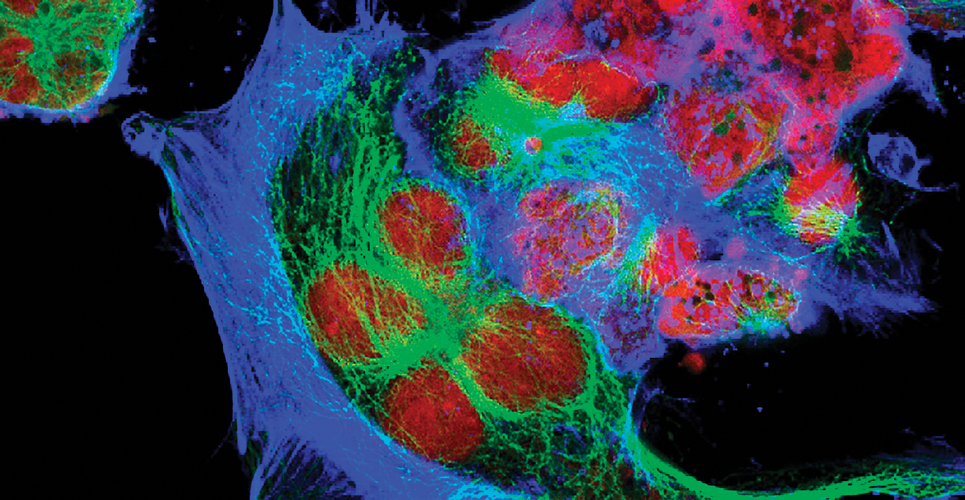 Advances in the treatment of paediatric neuroblastoma

Pharmacological advances in immunotherapy have led to the identification of targeted specific oncogenic drivers of neuroblastoma but further research is essential to improve survival rates, especially for those with relapsed, high-risk disease

NBL is the most common solid extracranial tumour in children,2,3 and can present anywhere in the sympathetic nervous system with few signs or symptoms in cases of localised disease, to distinctive signs in patients with metastatic disease.4 The clinical presentation of NBL is caused by the tumour mass and metastasis, from which an abdominal mass is one of the most common presentations. Other symptoms are bone pain (especially in metastatic disease), pancytopaenia, subcutaneous skin nodules and paralysis.

The estimated incidence in North America and Europe is 10.5 cases per million children younger than 15 years.3,5 At diagnosis, 90% are younger than 5 years, with a median age of 17–19 months.1,2,6 Adolescents and adults, by contrast, rarely develop NBL and account for less than 5% of all cases.6

Prognostic factors are both patient- and tumour-related. Patient-related factors include age at the time of diagnosis, in general, the younger the children are at the age of diagnosis, the better the survival rate, except for newborns. Tumour-related factors include disease stage, tumour histology and molecular and cytogenetic features, including MYCN amplification, DNA content and gain or loss of whole or partial chromosomes. Prognosis is highly variable and ranges from spontaneous regression or cure in >90% of patients with low-risk disease to <50% for those with high-risk disease.1,2,7

Based on subsets of known clinical and biological prognostic factors, NBL patients are currently stratified into different groups. Risk classifications are used to determine and optimise treatment.1,2,7–9 For more specifications about the treatment groups, reference to individual treatment protocols or groups is made.

Surgery is the mainstay of treatment in this group although some infants/children need additional chemotherapy (multi-agent low or moderate intensity, frequently used combinations include cyclophosphamide, carboplatin or cisplatin, etoposide or teniposide and doxorubicin). Radiation therapy is reserved for unresectable tumours or progressive tumours with no response to chemotherapy or for children with life threatening or other complications.1,2

Patients belonging to this group are at the highest risk of disease progression and mortality and the treatment of high-risk NBL patients remains a challenge. Therapy includes an aggressive multimodal approach with chemotherapy, surgical resection, high-dose chemotherapy with hematopoietic stem cell transplantation, radiation therapy and immunotherapy. An induction phase using intensive chemotherapy is used to shrink primary and metastatic tumours, local control by surgical resection and radiation therapy, followed by a consolidation phase that includes high-dose chemotherapy followed by an autologous stem cell transplantation. The final phase geared toward eradication of minimal residual disease including the use of cis-retinoid acid and immunotherapy.
The long-term survival of this group was historically very low but has improved outcomes now although approximately only 40% of children remain disease-free long-term.1,2,5

This is a rather new term, which still lacks a universal definition4 and refers by some others to refractory disease, or death from disease within
18 months of diagnosis’ or patients with 5-year event-free survival of 10–15%.10

Development of drugs to treat NBL has been an area of active research area in paediatric oncology. The following section highlights some, but certainly not all, of the recent advances and strategies for the pharmacological treatment of NBL.11

Dinutuximab beta (Qarziba®; Eusapharma, The Netherlands)12 is a chimeric monoclonal IgG1 antibody directed against the sialic acid-containing glycosphingolipid GD2 expressed on almost all NBL tumour cells. It induces cell lysis, which makes it an attractive target for immunotherapeutic approaches to NBL. However, expression of GD2 is not limited to tumour cells only, as they are also present on central nerve tissue and peripheral nerve cells explaining the dinutuximab toxicity. Their activity is based on antibody-dependent cell-mediated cytotoxicity (ADCC) and complement-dependent cytotoxicity (CDC).4

The drug is licensed for the treatment of high-risk NBL in patients aged 12 months and above, who have previously received induction chemotherapy and achieved at least a partial response, followed by myeloablative therapy and stem cell transplantation, as well as patients with history of relapsed or refractory NBL, with or without residual disease,12 and in patients with a history of relapsed/refractory disease and in patients who have not achieved a complete response after first line therapy, where
it should be combined with interleukin-2 (IL-2).

Treatment with dinutuximab consists of five consecutive courses, over 35 days. The individual dose is calculated on the body surface area and can be administered as a continuous infusion over the first ten days of each course (a total of 240 hours) at the daily dose of 10mg/m2 or by five daily infusions of 20mg/m2 administered over 8 hours, on the first five days of each course.

Common side effects and toxicities include pain and discomfort, neurological adverse reactions (severe neuropathic pain and peripheral neuropathy) and serious and potentially life-threatening infusion reactions and allergic reactions which may lead to discontinuation of treatment. Prehydration and premedication is required for the administration. Other adverse events include bone marrow suppression, capillary leak syndrome, electrolyte abnormalities, and infection among others.

Hu14.18K322A is a monoclonal antibody that binds to the same epitope as dinutuximab. It is a humanized form of dinutuximab and developed to decrease complement activation that might be the cause of dinutuximab-associated neuropathic pain.4 Clinical trials are currently ongoing.13

ALK is a receptor tyrosine kinase that serves as an oncogene in many cancers and is also found in childhood cancers including NBL. Many ALK tyrosine kinase inhibitors (TKIs) have been developed and are investigated alone and in combination with other therapies for ALK-driven tumours.4 Newer ALK TKIs show promise in targeting the most common NBL mutation including first- (crizotinib), second- (ceritinib) and third-generation (lorlatinib) ALK TKIs.

Crizotinib is a first-generation small molecule inhibitor of ALK/MET (mesenchymal-epithelial transition)/ROS1 (receptor tyrosine kinase encoded by ROS1 gene) and has demonstrated efficacy in ALK-positive non-small-cell-lung-carcinoma and some NBL patients, certain mutations to ALK in NBL contribute to resistance.4

Ceritinib, a second-generation ALK inhibitor, is a potent ALK inhibitor compared to crizotinib. It is currently being investigated in pediatric clinical trials as a single agent or in combination.11,13

Lorlatinib is a third-generation, oral, small-molecule ALK/ROS1 inhibitor. Results of preclinical studies suggest its potential in crizotinib-resistant ALK-driven NBL and its effectiveness as a single agent. It has a structure-based, drug design approach to improve central nervous system penetration by generating a macrocyclic compound that can also overcome ALK mutant resistance and high P-glycoprotein efflux.11

Other ALK inhibitors currently under investigation include brigatinib, alectinib and ensartinib. Many second- and third-generation ALK TKIs cross the blood–brain barrier, which may be effective in rare NBL patients with CNS metastases harbouring ALK mutations.11

The Trk family has a role in the development and normal functioning of the peripheral central nervous system.4 TrkA is associated with more favorable outcomes while TrkB is associated with high-risk tumours and progression with more unfavorable outcome. As some NBL patients have an overexpression of TrkB, small molecule inhibitors targeting TrkB remain a plausible approach to treatment.4,6

Entrectinib is a selective Trk, ALK and ROS1 inhibitor that showed promising results in Phase I clinical trials and is currently undergoing Phase I/II trials.13

Cabozantinib is a multi-targeted TKI including vascular endothelial growth factor receptor (VEGFR2), MET, rearranged during transfection (RET) and tunica interna endothelial cell kinase (TEK) and showed, preclinically, inhibition of NBL in vitro and in vivo alone and in combination therapies.14 Additional studies to evaluate effects and toxicities are ongoing.14

MYCN oncogene amplification is detected in about 20% of all NBL patients and 40% of high-risk patients and is associated with adverse outcomes.11

Difluoromethylornithine (DFMO) is an irreversible inhibitor of ornithine decarboxylase, a target of MYCN, an enzyme involved in polyamine synthesis, which are essential cations upregulated in cells with a rapid proliferation. High levels are detected in poor prognosis NBL.11,15 Clinical trials to evaluate its use as a therapeutic strategy for maintaining long-term remission are ongoing.4,11,13 DFMO given to children with high-risk NBL with relapsed/refractory NBL seemed to be well tolerated and safe and appeared to improve the event-free and overall survival rates compared with historical controls. Studies to confirm these observations are ongoing.4,13

Other drugs targeting MYCN include Aurora Kinase inhibitors (for example, alisertib), which have been identified as a potential therapeutic target in NBL tumours, and the group of bromodomain inhibitors. All of these are still under investigation.4,13

In addition to monoclonal antibodies, the safety and efficacy of CAR-T cells is being explored in high-risk NBL and relapsed/refractory NBL and several clinical trials are underway.4,13 The use of natural killer (NK) cell infusions in the treatment of relapsed HR-NBL including ex vivo expanded autologous and haploidentical allogeneic NK cells is also being explored.13

NBL is the most common extracranial solid cancer
in children. Pharmacological advances in immunotherapy have led to the identification of targeted specific oncogenic drivers of NBL. However challenges remain, and further research is essential to improve survival rates, especially for those with relapsed, high-risk disease.

Be in the know
Subscribe to Hospital Pharmacy Europe newsletter and magazine
Subscribe
Share this story:
RELATED ARTICLES
SSRIs “no better than a placebo”
Drug “not effective in higher dose”
Drug effective in fighting diabetes
The management of chronic constipation
What’s in my medicine and is it safe?