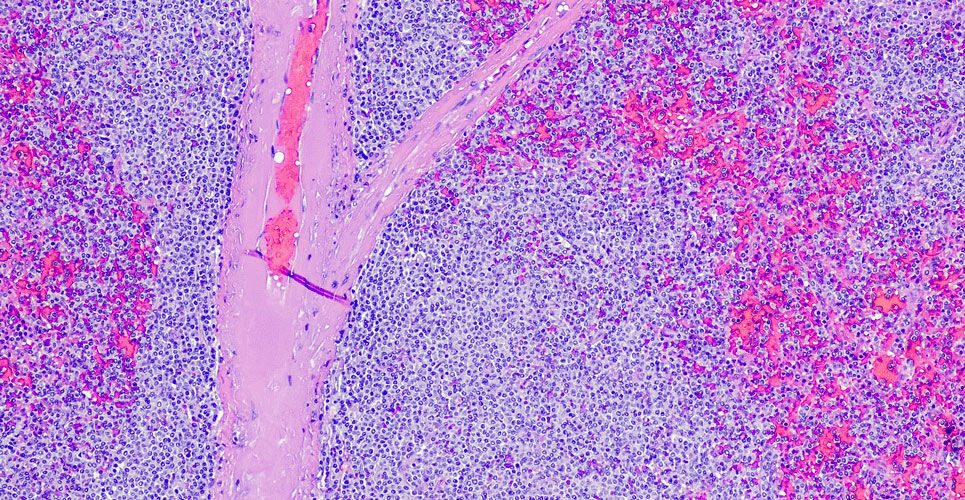 by Rod Tucker
Published on 6 January 2023

Glofitamab therapy after pre-treatment with obinutuzumab, led to a fast and durable complete response rate in patients with refractory or relapsed mantle cell lymphoma after the use of Bruton tyrosine kinase inhibitors according to a study presented at the American Society of Haematology (ASH) conference in in New Orleans, US.

Mantle cell lymphoma (MCL) is a rare, subtype of B-cell non-Hodgkin lymphomas characterised by a translocation resulting in over-expression of the cyclin D1 gene.  It develops from malignant B-lymphocytes within a region of a lymph node known as the mantle zone and largely affects men aged between 60 and 70 years of age, with around 1 in 200,000 diagnoses per year. The first-line treatment consists of intensive chemotherapy with autologous stem cell transplant for the fit or less intensive chemotherapy for less fit and transplant-ineligible individuals, although many eventually relapse with a progressive clinical course. Treatment with Bruton tyrosine kinase inhibitors such as ibrutinib is common although among ibrutinib-refractory MCL patients, there is a short survival. For example, one trial in 114 patients found that the median overall survival following cessation of ibrutinib was 2.9 months.

Glofitamab is a T-cell-engaging bispecific antibody possessing a novel 2:1 structure with bivalency for CD20 on B cells and mono-valency for CD3 on T cells. In a phase 1 trial of patients with relapsed or refractory B-cell non-Hodgkin lymphoma, the drug showed favourable activity with frequent and durable complete responses and a predictable and manageable safety profile.

In the current study reported at ASH, patients were pre-treated with obinutuzumab 7 days prior to the first dose of glofitamab to mitigate the risk of cytokine release syndrome (CRS). Intravenous glofitamab step-up dosing was given on day 8 (2.5 mg) and 15 (10 mg) of the the first cycle, followed by a target dose of 16mg after 1000mg obinutuzumab or 30mg after 2000mg obinutuzumab, from the first day of the second cycle, then every 3 weeks for up to 12 cycles.

A total of 37 patients with a median age of 72 years (73% male) received glofitamab step-up dosing and of whom, 16 received pre-treatment with obinutuzumab 1000 mg. The majority (91.9%) had Stage III/IV disease and the median number of prior therapies was 3 with 64.9% having received a Bruton Kinase inhibitor. In addition, patients received glofitamab a median of 1.9 months after their last, treatment.

After a median follow-up of 8 months, overall response rate (ORR) and complete response (CR) rates were 83.8% and 73.0% respectively, across both obinutuzumab cohorts although the CR rate was higher with obinutuzumab 2000 mg (81% vs 62.5%). However, most impressive, was that across both cohorts, the median time to achieving a complete response was 51 days and an estimated 71.6% of patients with a CR remained in response at 9 months, with a median CR of 10 months.

In terms of safety, the most common adverse events were CRS (75.7%) and neutropenia (40.5%) although the CRS rates were lower with the higher dose of obinutuzumab (66.7% vs 87.5%). Neurologic adverse events occurred in 15.4% of all patients although none discontinued treatment due to adverse events.

The authors concluded that using a fixed-duration glofitamab monotherapy induced high and durable CR rates, the majority of which were achieved early, in heavily pretreated patients with MCL, most of whom had prior Bruton kinase inhibitor therapy and thus a particularly poor prognosis.