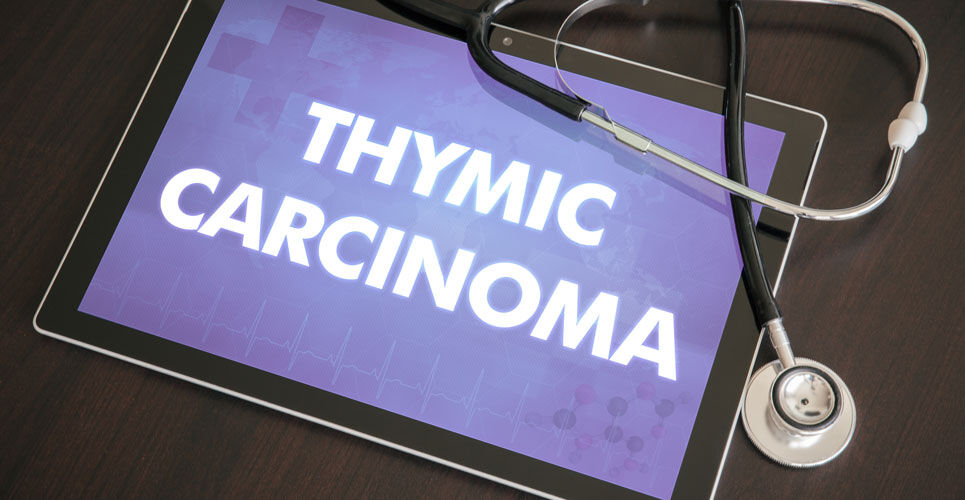 Apatinib therapy appears to be an effective treatment for patients with advanced thymic epithelial tumours, especially those who failed to achieve a satisfactory response from platinum-based chemotherapy. This was the conclusion of a small, Phase II trial by Chinese researchers.

Thymomas (T) and thymic carcinomas (TC) are tumours of the thymus gland and together are known as thymic epithelial tumours (TETs). Fortunately, such cancers are rare with an incidence of 1.7 per million per year in Europe. The preferred treatment option for TETs is surgery and one retrospective analysis of outcomes after surgical resection, found that the 5-year disease-free survival rate and overall survival rate was 59.7% and 66.2% respectively. Nevertheless, it has been found that approximately 10 to 15% of resected tumours will reoccur. Moreover, when TETs become metastatic, one analysis found that patients may benefit from a pemetrexed (platinum)-based chemotherapy regimen. Unfortunately, if chemotherapy fails, treatment options are more limited but there is data to suggest that in high risk TETs, there is increased expression of several vascular endothelial growth factors, which possess an angiogenic properties and have stimulant role in TETs. This finding would indicate a potential role for angiogenesis inhibitors such as apatinib therapy after chemotherapy failure. In fact, a study of a single patient with advanced thymic carcinoma found that apatinib therapy led to a progression-free survival of 6.3 months. In addition, a second, single patient study with advanced thymic squamous cell carcinoma, also showed that apatinib therapy produced a 5 month overall response and a 10 months progression-free survival.

Given the potential for apatinib therapy, the researchers decided to further investigate the value of this treatment in patients with advanced TETs who had failed to respond to platinum-based chemotherapy. They performed an open-label, single-arm phase II trial in adult patients with confirmed either T or TC and who had progressed after the failure of at least one line of systemic chemotherapy and had a life-expectancy of at least 3 months. Patients received apatinib therapy at a dose of 500 mg once daily and a period of 28 days was considered as a treatment cycle. The primary endpoint was the confirmed objective response rate (OOR) and which they defined as the proportion of patients with the best response of complete response (CR) and partial response (PR). Secondary end points included progression-free survival (PFS) and overall survival (OS).

A total of 29 patients with a median age of 53 (68% male) were included although 4 patients were subsequently excluded. The remaining 25 patients received at least 1 apatinib cycle.

The authors concluded that while this was the first prospective trial of apatinib therapy in patients with advanced TETs, the drug showed encouraging anti-tumour therapy and could serve as an alternative option for those with advanced disease.