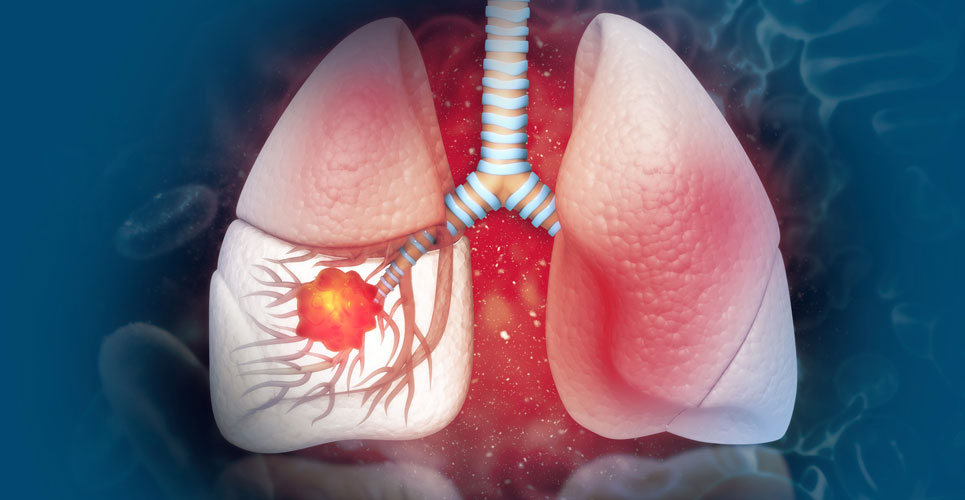 Using the early access to medicines scheme, the UK MHRA has allowed use of tepotinib for patients with advanced non-small-cell lung cancer.

Data from Cancer Research UK show how lung cancer is the third most common cancer in the UK, leading to approximately 130 new cases every day. There are two different types of primary lung cancer: small cell and non-small cell, with the latter accounting for around 80–85% of all cases. With early detection, non-small-cell lung cancer has an excellent prognosis with 5-year survival rates of 70 – 90%, although unfortunately around three-quarters (75%) of patients have advanced disease (i.e., stages III/IV) at the time of diagnosis. Among such patients, the one-year survival for those with stage IV disease is only 19%, dropping to 2.9% at 5 years.

In recent years, the discovery that molecular abnormalities are associated with lung cancer, has led to the search for treatments specifically directed at these abnormalities. One such abnormality relates to the Mesenchymal-epithelial transition (MET) factor gene, which, under normal circumstances, plays a crucial role in various cellular functions. The MET gene encodes for a receptor tyrosine kinase that activates signalling pathways involved in cell proliferation, survival and growth and it is mutations in this gene that drives oncogenic activation. One particular aberration identified in non-small-cell lung cancer is skipping of METex14 whereby substitutions or deletions at intron 13, result in skipping intron 14. MET skipping occurs in approximately 5% of non-small-cell lung cancer cases and the resultant loss of exon 14, increases the concentration of MET protein and which drives activation of downstream signalling that promote tumour development via phosphoinositide 3-kinase pathways.

Tepotinib is an oral MET kinase inhibitor which works by inhibiting MET-dependent downstream signalling pathways. The effectiveness of tepotinib as monotherapy for patients with metastatic non-small-cell lung cancer with MET exon 14 skipping alterations was examined in the phase II VISION study which was published in May 2020. In this open-label Phase II study, tepotinib was given as daily dose of 500mg to patients 18 years and older with advanced or metastatic non-small-cell lung cancer, confirmed by either liquid or tissue biopsy, with a MET exon 14 skipping mutation. The primary endpoint was the response rate based on the RECIST 1.1 criteria, which represents a standard way to measure a patient’s response to cancer treatment.

Findings
A total of 152 patients received tepotinib, of whom, 99 had 9 months of follow-up. The response rate was 46% (95% CI 36–57%). Moreover, this response rate was consistent for both liquid and tissue-biopsy (48% and 50% respectively) and the response was similar regardless of baseline characteristics or the number of prior treatments. Adverse reactions of grade 3 severity or higher occurred in 28% of patients, including, most commonly, peripheral oedema (7%) although adverse effects led to treatment discontinuation in only 11% of patients. The authors of the VISION study concluded that tepotinib was associated with a partial response in at least half of all patients.

Based on these findings, the MHRA has permitted the use of tepotinib via the Early Access to Medicines Scheme (EAMS), for patients with advanced non-small-cell lung cancer. While this does not mean that tepotinib is actually licensed for use, the EAMS recognises the potential value of a treatment where there is a high unmet clinical need.