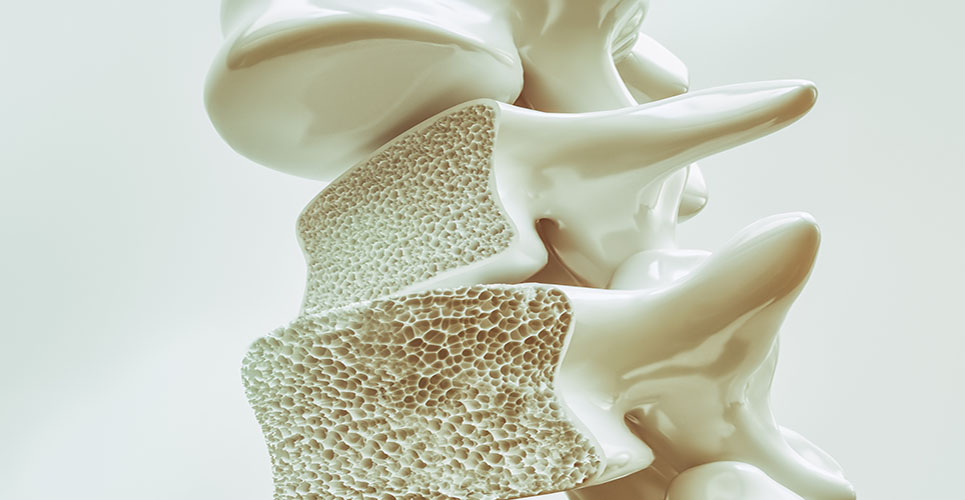 Osteoporosis and the new bisphosphonates

Osteoporosis is a disease characterised by a low bone mass and a deterioration of bone architecture leading to an increased risk of fracture. Fragility fractures occur after a small trauma at any skeletal site, most commonly at the hip, the spine or the wrist, and they are associated with increased morbidity and mortality. In postmenopausal osteoporosis, the most common form of the disease, there is an increased rate of bone turnover with an increase in bone resorption (degradation) relative to bone formation.

Bisphosphonates are molecules with a strong affinity for bone mineral that markedly inhibit t he activity of osteoclasts, the cells responsible for bone resorption. They are widely used in a variety of conditions associated with increased bone resorption, such as hypercalcaemia, multiple myeloma, bone metastases and Paget’s disease of bone. They have recently become a first-line therapy for postmenopausal osteoporosis.

Features common to bisphosphonates
Bisphosphonates are poorly absorbed by the gut (around 1% for most of them), with major food and calcium interaction, and need to be taken on an empty stomach with water. About half of absorbed bisphosphonate is retained in the skeleton, and the other half is cleared through the kidney. The safety profile of bisphosphonates is favourable. The possibility of minor gastrointestinal discomfort has been reported for all bisphosphonates (such as dyspepsia, abdominal pain and diarrhoea), but this rarely leads to discontinuation. Rare cases of oesophagitis have been reported with alendronate. Etidronate can induce a mineralisation defect of bone after prolonged use, but this has not been seen with other bisphosphonates.

Etidronate
Etidronate was the first bisphosphonate to be developed. Etidronate 400mg per day, for 15 days every three months, is indicated in the treatment of osteoporosis. Two placebo-controlled studies have shown small increases in bone mineral density (BMD) at the lumbar spine with a significant reduction in vertebral fractures.(1,2) However, the reduction in vertebral ­fractures after two years of treatment was not sustained after three years. Etidronate does not reduce the risk of hip fracture.

Alendronate
A dose-dependent increase in spine BMD has been reported in postmenopausal women with low BMD treated with alendronate. Compared with placebo after two years of treatment, the 10mg/day dose induced an increase of 8.6% and 6.5% in the lumbar spine and total hip BMD, respectively.(3)

A study (FIT-1) in 2,027 osteoporotic women with at least one prevalent vertebral fracture treated with alendronate 5mg daily for two years, followed by 10mg daily during a third year, demonstrated a significant 50% reduction in vertebral, wrist and hip fractures compared with placebo.(4)

Women with a low BMD but without vertebral fracture at baseline (FIT-2) were treated with alendronate for four years using the same placebo-controlled design. There was a small decrease in clinical fracture incidence with alendronate that did not reach significance (p = 0.07).(5) The incidence of new vertebral fractures, as defined by morphometry, was significantly reduced by treatment. When the analysis was restricted to those patients that had osteoporosis according to the WHO criteria – a BMD more than 2.5 standard deviations below the mean value of healthy premenopausal women (T-score ≤2.5) – the reduction in all types of clinical fractures was significant.

Finally, a placebo-controlled study in 1,908 postmenopausal women with low BMD (T-score <–2) showed a 47% reduction in the risk of non-vertebral fractures after one year of alendronate 10mg/day.(6)

The efficacy of alendronate 10mg/day has been demonstrated in a two-year double-blind placebo-controlled trial of 241 men with osteoporosis (T-score at the femoral neck ≤–2 or ≤–1 with a fragility fracture).(8) The increase in BMD was comparable to that in women, and the incidence of vertebral fractures was significantly decreased in the alendronate group compared with the placebo group (0.8% versus 7.1%).

It has been shown that alendronate given once a week at a dose of 70mg has the same efficacy as 10mg daily to increase BMD and reduce bone turnover with an excellent safety profile.(9) In those countries in which it is available, the once-weekly ­regimen is extremely successful.

Risedronate
Two large trials have assessed the ability of risedronate to decrease the risk of new vertebral fractures among postmenopausal osteoporotic women with prevalent fractures in the USA(10) and in Europe and Australia.(11) The American study enrolled over 2,400 women and randomly assigned them to risedronate 2.5mg/day, 5mg/day or placebo. The 2.5mg group was discontinued after one year, and the other two groups were treated for three years. Risedronate 5mg/day significantly reduced the cumulative incidence of new vertebral fractures by 41% over three years, and by 65% after the first year. Non-vertebral fractures were significantly reduced by 39%. There was a significant increase in BMD in the 5mg/day group compared with placebo (5.4% at the lumbar spine, 1.6% at the femoral neck and 3.3% at the trochanter).(9)

The effects of risedronate on hip fractures has been assessed in 5,445 women aged 70–79 years with osteoporosis defined by a low BMD, and in 3,886 women over 80 years of age that were mainly recruited on the basis of clinical risk factors for falls, without BMD measurement for most of them.(12) The two groups were randomly assigned to receive risedronate 2.5mg/day, 5mg/day or placebo for three years. The overall analysis showed a 30% significant reduction of hip fractures (p = 0.02) with risedronate. In the first group, the ­reduction of hip fractures was larger (40%), reaching 60% in those with prevalent vertebral fractures. In contrast, there was no significant reduction in the second group, stressing the need to target bisphosphonates to those women who have osteoporosis as confirmed by BMD measurement.

Clodronate
Clodronate was developed over 20 years ago and is still widely used for the treatment of malignant bone diseases. In a study of 677 patients with osteoporosis (postmenopausal osteoporosis, secondary osteoporosis and men with osteoporosis), clodronate 800mg/day for three years decreased the incidence of new vertebral ­fractures by 46% (p = 0.07) compared with the placebo group.(13)

Tiludronate
Tiludronate is a bisphosphonate used in several countries for the treatment of Paget’s disease of bone. Its development in osteoporosis has been discontinued because of the lack of evidence of fracture reduction in large phase III trials at the dose tested.

Pamidronate
Oral daily pamidronate is probably effective in osteoporosis but is associated with a high incidence of upper gastrointestinal adverse events.(14) Intravenous infusion of pamidronate, commonly used in malignant bone disease and in Paget’s disease of bone, is used in some osteoporosis patients every three months.

Osteoporosis is a chronic disease that requires long-term therapy, but the optimal duration of bisphosphonate therapy is not known. The possibility of administering bisphosphonates intermittently will ­probably increase their long-term compliance.