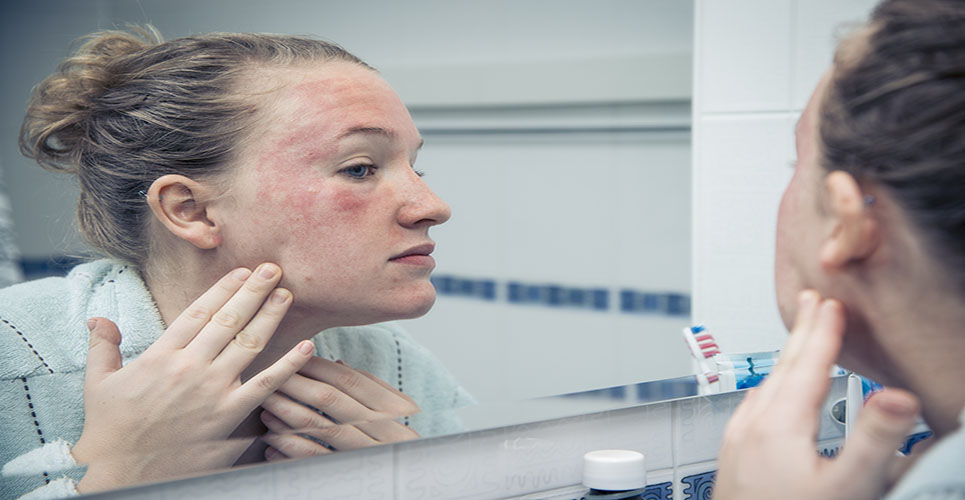 Adverse drug reactions (ADRs)(1,2) are a public health issue, with an incidence in hospitalised patients of 10.3% in France and 10.9% in the USA. For 2–3% of patients, reactions are severe. The outcome is death in 0.15% of all hospitalised patients, with 10,000 and 60,000 deaths/year in France and the USA, respectively. The occurrence of an ADR may imply transitory or permanent impairment of quality of life, anxiety for the patients and their relatives, loss of confidence in doctors, pharmacists and medicine in general and increasing costs of patient care, among other problems. ADRs are also a source of stress for the practitioner, with problems such as feelings of guilt, difficulties in obtaining a definite diagnosis (with causal drug identification), immediate and late management of the reaction, and choice of subsequent medications.

Skin is the organ that is most frequently involved in ADRs, and symptoms may be mild, moderate or severe. Severe cutaneous drug reactions are defined by death and life-threatening conditions, hospital admission or prolongation and disability/incapacity. The most severe and potentially lethal cutaneous reactions are toxic epidermal necrolysis (Lyell syndrome) and hypersensitivity syndromes (or DRESS: drug rash with eosinophilia and systemic symptoms).

Clinical features and drugs involved
Several drug-induced syndromes have been described. They differ in clinical grounds, aetio-pathogenic mechanisms, differential diagnosis and the possibility of a cause other than reaction to a drug, time-sequence between drug-taking and onset of eruption, prognosis and time of healing. The treatments are similar, as they are often symptomatic. Differential diagnosis is an essential issue, because most of these drug-induced syndromes mimic other diseases: only a few syndromes (such as fixed drug eruption) are specific to a drug reaction. Moreover, the same drug may induce several different clinical reactions, making causal drug identification more difficult.

Urticaria and angio-oedema
Urticaria is defined as a transient pruriginous eruption of erythematous or oedematous swellings of the dermis (Figure 1). Occurring with or without associated urticaria, angio-oedema is defined as deep urticaria (or oedema of subcutaneous tissues), with little or no itch; it is frequently observed on the face, and may be dangerous if mucous membranes are involved (anaphylactic reaction).

The mechanism of this adverse reaction is immunological (IgE-mediated) or pharmacological (complement-specific or -nonspecific mast cell degranulation), with circulating immune complexes observed in the case of serum sickness. Treatments include withdrawal of the causal drug, use of an antihistaminic agent and clinical monitoring. Respiratory distress requires more aggressive treatments, sometimes involving epinephrine, corticosteroids and intubation. The most frequently incriminated drugs are penicillins, radiocontrast agents, angiotensin-converting enzyme (ACE) inhibitors and salicylates, among others. Less than 10% of acute urticaria are drug-induced, with food allergy or intolerance and chemical intoxication being the main causes for this condition.

Maculopapular eruptions
Maculopapular eruptions are defined as a polymorphic eruption of macules and papules, starting on the trunk and frequently highly itchy. They can also cause fever and benign hepatic disturbance. The onset of reaction ranges from 4 to 14 days after starting the treatment, with eruptions disappearing within a week with subsequent desquamation in fine scales.

Treatments include withdrawal of the causal drug, use of a sedative antihistaminic agent and clinical monitoring. The most frequently incriminated drugs are antibiotics, antiepileptics, nonsteroidal anti-inflammatory drugs (NSAIDs), ACE inhibitors and allopurinol. In children, 10–20% of maculopapular eruptions are drug-induced, versus 50–70% in adults, with viral eruptions being the main differential diagnosis.

Hypersensitivity syndrome
Hypersensitivity syndrome or, more correctly, DRESS, is a severe form of maculopapular eruption, with internal involvement (including fever, lymphadenopathies, hypereosinophilia, diffuse oedema, hepatitis, interstitial nephritis, pulmonary infiltrates, myocarditis and hyperlymphocytosis) that may be life-threatening. The onset of the reaction ranges from 2 to 6 weeks after first exposure to the drug (sooner if rechallenge). Mortality rate has been evaluated at about 10%; in other cases, recovery is usually complete, although rash and hepatitis may persist for weeks, with some cases persisting for months. Treatments include withdrawal of the causal drug, hospitalisation and use of a sedative antihistaminic agent.

Corticosteroids are used only if there is internal involvement, in which case symptomatic management and vital function assistance are also required. The most frequently incriminated drugs are phenytoin, carbamazepine, phenobarbital (one reaction per 10,000 exposures), sulphonamides, dapsone, allopurinol and minocycline. This clinical feature is drug-induced in 70–90% of cases, with differential diagnosis including viral infections and malignant haemopathies, such as lymphomas.

Acute generalised exanthematic pustulosis
Acute generalised exanthematic pustulosis (AGEP) is characterised by numerous small, nonfollicular, subcorneal, sterile pustules arising on a diffuse oedematous erythema, predominating in the big folds and occurring abruptly. Internal involvement includes fever, high blood neutrophil count and oedema. The onset of reaction ranges from 1 to 4 days after starting the treatment, with the condition disappearing in 10 to 15 days. Mortality is <1–2% and occurs mainly in elderly persons with previous chronic diseases. Treatments include withdrawal of the causal drug and symptomatic assistance. The most frequently incriminated drugs are antibacterial agents (in 50% of cases, aminopenicillins and macrolides), chloroquine and terbinafine. This clinical feature is drug-induced in 70–90% of cases, with pustular psoriasis being the main differential diagnosis. Some viral infections and hypersensitivity to mercury may induce a similar clinical pattern.

Fixed drug eruption
Fixed drug eruption (FDE) is characterised by one or several sharply marginated, round or oval plaques of erythema and oedema, becoming dusky violaceous or brown and sometimes bullous. The plaques, which are approximately 2–5cm in diameter, can be mainly found on the hands and feet and on the genitalia. There is no internal involvement. The onset of reaction ranges from a few hours to 2 days after each intake of the drug, with spontaneous regression observed with cicatricial pigmentation. Each drug readministration is followed by a recurrence of the inflammatory feature, with increasing size and pigment accentuation, and, ultimately, new plaque(s) may appear. Exceptionally, FDE may spread to the whole body. Treatment consists of withdrawal of the causal drug and subsequent abstention. The most frequently incriminated drugs are carbamazepine, phenobarbital, acetaminophen and sulphamides. All FDEs are drug-induced (drug-specific pattern).

Stevens–Johnson syndrome and toxic epidermal necrolysis
Stevens–Johnson syndrome and toxic epidermal necrolysis (SJS-TEN) are part of the same spectrum, characterised by cutaneous target-like lesions and mucous erosions. Although erythema multiforme (EM) is clinically similar, it is considered that EM distribution is more acral and has more typical targets than SJS-TEN. In addition, EM is caused by infections, such as herpesvirus. SJS-TEN begins as a morbilliform eruption, frequently associated with purpuric lesions. Full-thickness epidermal necrosis leads to cutaneous blisters and postblister erosions, resembling a widespread second-degree burn. SJS is defined by epidermal detachment of <10% of body surface area, and TEN by detachment of >30%. Between 10% and 30%, the condition is termed “transitional SJS-TEN”; the frequency of this condition, however, is rare (1 case/million/year). Internal involvement consists of severe burn, with massive fluid losses and electrolyte imbalance. Surinfection, thermoregulation impairment, energy expenditure, alteration of immunological functions and haematological abnormalities are usual systemic complications. Mucous membrane involvement (oropharynx, eyes, genitalia and anus) requires attentive nursing. Gastrointestinal and tracheobronchial epithelium can also be involved and cause high morbidity. The onset of the reaction ranges from 7 to 21 days after taking the drug (and sometimes more). Mortality is 30% for TEN forms. Age, percentage of denuded skin, neutropenia, serum urea nitrogen level and visceral involvement are prognosis factors. After healing, scars, pigmentation disorders, conjunctival lesions and Sjögren-like syndrome are the main long-term complications. Treatments consist of withdrawal of the causal drug, hospitalisation in intensive care unit and symptomatic management (for severe burns) with emphasis on infection prevention. There is no standard for topical management, and no specific treatment exists. Corticosteroid administration is controversial, as it is probably not useful and could even be deleterious in some cases; intravenous immunoglobulins give different results, without decisive conclusion having been reached for their use in this indication. The most frequently incriminated drugs are antibacterial sulphonamides, allopurinol, oxycams and anticonvulsant agents. 80% of SJS-TEN are drug-induced, with graft-versus-host disease, Mycoplasma pneumoniae and “idiopathic”forms being the other causes for this condition.

Other clinical features
Lichenoid eruptions, photosensitivity (photoallergy or phototoxicity), purpuric eruptions (with or without vasculitis) and cutaneous discolouration, among other conditions, may also be caused by drugs. Some common dermatoses, such as leg ulcers, acne, lupus erythematosus and pemphigus, may be induced or worsened by drugs.

Aetiopathogenesis and risk factors
The aetiopathogenesis of these adverse reactions is not well known, although drug metabolites may be involved, as metabolites are often more immunoreactive than the parent drug. This hypothesis is based on two observations: oxidative metabolites act as haptens, and patients with altered detoxification pathways are at increased risks (eg, a slow N-acetylation phenotype may predispose to sulphonamide reactions). Thus, the immune response would be directed at a reactive metabolite linked to a normal protein. However, three other observations are in contradiction with this hypothesis: cutaneous drug reactions have been observed with drugs that do not have reactive metabolites (eg, minocycline); studies on acetylation status are contradictory; and immune response is more often directed at sulphonamides than at metabolites.(3,4)

Cancer, autoimmunity (lupus erythematosus) and viral infections, especially HIV and HHV6, are known risk factors for developing a drug reaction. This may be explained by modifications in immunity for these conditions. A virus may also be a cofactor for triggering an adverse reaction.(5) The eruptions observed after treatment with ampicillin in Epstein–Barr virus and CMV infections are well documented and frequent. After the acute infection phase, the patient may take the same drug without recurrence of eruption. HIV infection dramatically increases the risk.

Some particular pharmacogenetic profiles are associated with an increased risk of drug reaction. Although data may be contradictory between studies, the acetylation phenotype (low or fast) seems to be important in sulphonamide reactions. In addition, the relationship between liver enzyme polymorphism and drug oxidation and conjugation has been demonstrated. In HIV patients, glutathione deficiency may facilitate drug reactions.

Diagnosis, management and avoidance
All differential diagnoses must be considered before adverse drug reaction can be established. Only a few methods exist for causal diagnosis. Patch testing may be useful for some types of drug reaction (such as maculopapular eruptions, AGEP or FDE). Radioallergosorbant tests are useful only if the reaction is IgE-mediated (eg, some eruptions with penicillin). Lymphocyte toxicity assays are experimental and are not routinely used. Anamnesis and clinical examination are often the only way of determining the causal drug.(6) Detailed notes on patient drug intake (drug intake diary) are also useful.

Survivors of severe cutaneous drug reactions should not be re-exposed to the suspected offending agent(s) or to related compounds. For example, cross-reactions have been reported between different anticonvulsant agents (oxicams). Drugs of the same pharmacological class can be used if they are structurally different from the offending agent. As genetic factors are involved in drug-induced disorders, the culprit drug should not be used in blood relatives of the patient.