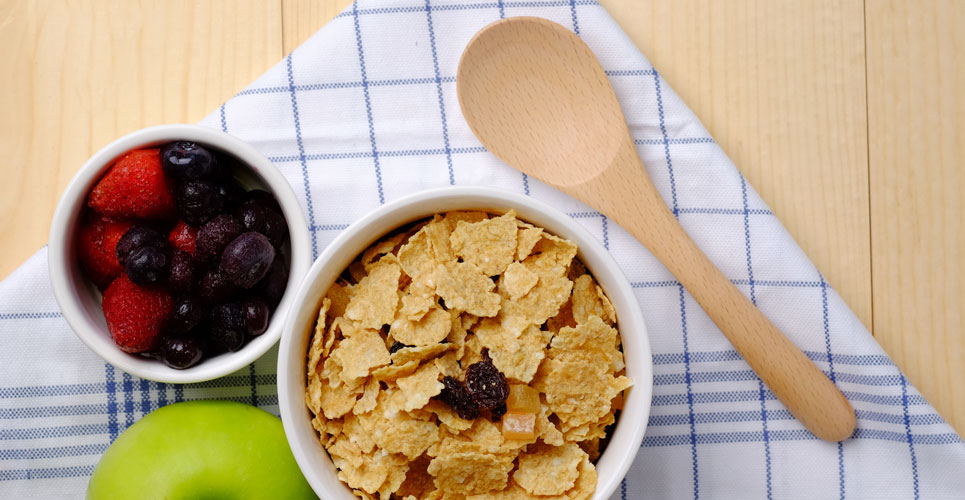 Eating breakfast regularly and including large amounts of dietary fibre reduces the risk of both overall and cardiovascular mortality.

Breakfast (BF) is often cited as the most important meal of the day and there are numerous studies indicating positive health benefits among those who regularly eat BF compared to non-breakfast eaters. For instance evidence suggests that not eating breakfast is associated with worse health outcomes including an increased risk of heart disease, a 21% higher risk of developing type 2 diabetes and a greater risk of all-cause mortality. Nevertheless, while these data are relatively consistent, less is known about whether any specific BF foods or components of food, are linked to a lower mortality and a reduced risk of cardiovascular events. One dietary component that is present in common BF foods such as oatmeal, fruit and cereals, is fibre. Furthermore, a recent umbrella review of prospective observational studies concluded that higher fibre intake appears to positively impact on not only cardiovascular disease but overall mortality.

This led a team from the Department of Family Medicine, West Virginia University School of Medicine, West Virginia, US, to wonder if there was an important association between BF, dietary fibre and mortality. The team used the National Health and Nutrition Examination Survey (NHANES) dataset and included individuals aged 40 years and over who self-reported on dietary intake between 1999 and 2002. To determine survival information, the team used a 2015 database which provided mortality follow-up details from the NHANES study. Using the NHANES data, the researchers included those who self-reported as BF eaters and based on the foods eaten, categorised dietary fibre intake as high (> 25 g/day) and low (< 25 g/day). Since hypertension, diabetes and cardiovascular disease can all negatively impact on mortality, the analysis included these three factors as covariates. The study’s primary outcomes were all-cause and cardiovascular disease (CVD) mortality and the team included a cohort of non-breakfast eaters which served as a control group.

Citation
King DE et al. A Relationship Between Mortality and Eating Breakfast and Fiber. J Am Board Fam Med 2021