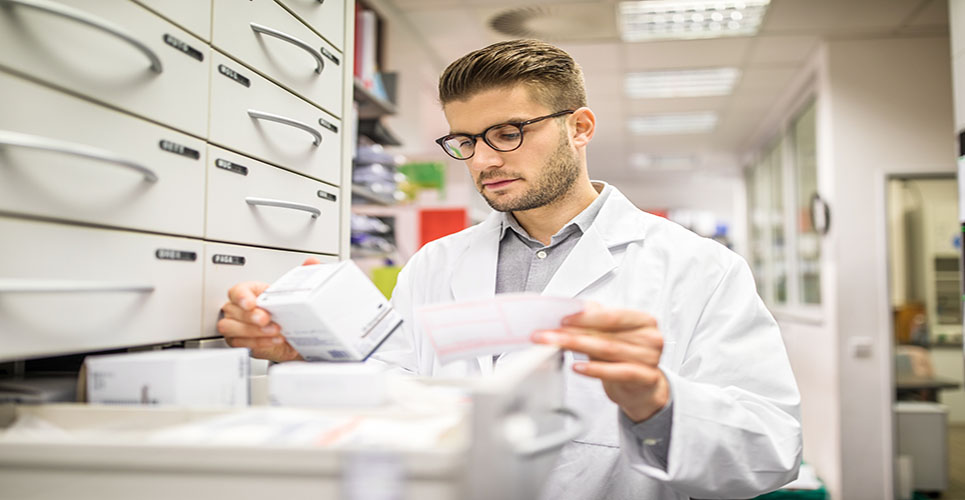 A day in the life of … an information pharmacist

It has been 33 years since the first Medicines Information Centres were set up in the London Hospital and Leeds General Infirmary (a few years before my time!). Medicines Information (MI) Services have evolved over the years to become one of the most organised and structured subdivisions of hospital pharmacy in the UK. The UK Medicines Information Service is an NHS pharmacy-based service provided by a network of local, regional and national centres. A strategy document for the further development of MI services and an implementation framework were published in 2000. A national competency framework has also been launched recently to facilitate continuing professional development, identify training and development needs, and provide a framework for recruitment and appraisal. These documents can be found on our national MI website: www.ukmi.nhs.uk

The majority of the 260 local MI centres are based within the pharmacy departments of hospital trusts. There are 13 centres working at a regional level across England, Scotland, Wales and Northern Ireland. These centres have a regional focus, providing support to the local centres within their area (we have 40 local centres in our region) in the form of enquiry answering support, information dissemination and training, as well as being responsible for the quality of these services. Regional centres also provide support to other NHS organisations within their regions such as NHS Direct and Primary Care Trusts (PCTs), and are involved in various projects both regionally and nationally.

MI services are coordinated at a national level by a steering group – the UK Medicines Information Pharmacists Group (UKMIPG). The group comprises the directors of the regional centres and coordinates the work of the MI network.

The structure MI works within has often been described using a pyramid, in which those lower down are supported by and contribute towards the work done by those above them. However, at the recent UKMI conference, the chair of UKMIPG suggested that this schema needs a little modernisation, and I agree with this. He suggested that the diagram shown in Figure 1 would better describe the flow of information and the support that is currently seen within the network.

The London MI service
I was initially attracted to MI because each day was so different – enquiries would come from different members of staff from different specialties within pharmacy and medicine. I enjoy the problem-solving (and often lateral thinking) that is required; there is continual learning, and it is always rewarding knowing that you have been able to directly influence the care of a patient by identifying the right information and by turning that into good quality advice for the enquirer.

I managed the MI service at Newham General Hospital in East London for a year and now work in a team of pharmacists for the London MI service, based at Northwick Park Hospital in Harrow. We share our office with the local MI centre and are based within the pharmacy department. Due to some recent appointments we are very lucky to be fully staffed at present. Our team consists of a director, a manager, four principals, a senior pharmacist, a C-grade and a secretary.

The core of every MI service is enquiry answering, and we currently have a sessional system of work – the week is divided into 10 enquiry answering “phone sessions”, and we are each responsible for a number of these. Outside these sessions (off-phone sessions) we have other responsibilities and various tasks and projects to work on.

I take the lead on NHS Direct issues from our centre. We provide training and enquiry answering support to six NHS Direct sites in our area. Another of my responsibilities is to deliver training on effective database (Medline and Embase) and internet searching as part of the London, Hertfordshire and Essex Pharmacy Education & Training programme.

I am glad to say that no two days are the same, and from one week or month to the next I can be working on very different pieces of work or projects. For example, a few months ago I was writing drug reviews as acting secretary for the London New Drugs Group, and one of my projects at the moment is to manage the update of stability data for medicines held on a fridge database (which we originally developed to be used for Y2K contingency planning).

My day
On the day in question I am “on-phones” in the morning. However, as my day today begins at 8am and our service is not open until 9am, I begin by finishing off something that I had begun yesterday. I had been checking some work that a colleague had written. One of the new national initiatives is the identification of frequently asked questions (FAQs) and production of high-quality, fully researched answers to them. These FAQs are then published on our UKMI website and will be updated every 15 months. The checking procedure is thorough and fairly lengthy. It involves checking search strategies and information coverage, readability and of course accuracy, which means reviewing each reference used and cross-checking that with what has been written. The director at the Wessex MIC is leading the project and all checked FAQs are sent to him for final approval and editing before they are added to the UKMI website. The FAQ that I am checking is titled “What is the evidence comparing doxazosin XL with standard doxazosin?”.

At 9am each day we have a brief meeting to discuss some of the previous day’s enquiries. This allows us to share what we have done and to learn from each other. It is also a useful forum for helping each other with difficult enquiries, as we can all put our heads together and have a useful discussion that usually results in some suggestions of where information might be found or who may be able to help.

My phone session was a relatively quiet one. The first enquiry of the day was from a GP asking if the use of clotrimazole pessary during the first trimester of pregnancy is safe. This is something we are frequently asked and so it was simple to advise. The next enquiry was from a PCT pharmacist asking about the use of ACE inhibitors in diabetic patients, particularly regarding choice in certain situations. There are some very good evidence-based resources available now and a lot of information and guidance on ACE inhibitor use in this patient population. I had a discussion with the enquirer about the various trial data and agreed to send some of the supporting evidence and guidelines in the post.

I made a start on a couple of enquiries from the in-tray before the third enquiry of the morning came in. This was also from a PCT pharmacist. She was asking for information on the significance of the interaction between warfarin and influenza vaccine, as there is a difference in what some of the GP surgeries in her PCT do. It’s only the beginning of October, so I’m sure that won’t be the last time that question comes up before the winter is over!

One of the enquiries that I had made a start on had been taken by a colleague the previous day from a lady who had been referred to us by her local PCT pharmacist. She was suffering from chronic pain, and, although I spent a while on the phone discussing what treatment options were available, it transpired that this lady had tried pretty much everything there was to offer, including some nondrug approaches. These had unfortunately been taken either without success or, due to intolerable side-effects, she had been unable to continue treatment. Because of this lady’s history, I suggested a possible option was to make contact with INPUT, a pain treatment unit at St Thomas’ Hospital in London. They run a programme especially for people with chronic pain that has not been cured by medical treatment. Subsequent feedback from the PCT pharmacist was that the lady had been very grateful for our discussion and that she intended to follow up my suggestion.

After lunch I compiled the last three months’ usage data for three of the NHS Direct sites within London. The regional centre at Guy’s Hospital and ourselves have a service level agreement with the five NHS Direct sites in the London region, and we have regular meetings with them. The data that I have emailed to a colleague at Guy’s will be used to produce a quarterly report, which will be discussed at our next NHS Direct support group meeting.

After a brief meeting with my manager to discuss future objectives, I spent a little time going through the FAQs with the pharmacist who had written them, explaining my comments and suggestions.

I then spent some time explaining to a new member of staff how to use a few of the internet-based resources that we have available, as part of his induction training.

During the last part of the day I finish preparing the final draft of the London New Drugs Group briefing document on bexarotene, a new treatment for cutaneous T-cell lymphoma, incorporating comments. I finished it off just before 6.30pm and left it for a lucky soul to do the final accuracy/ content/reference check! I am hoping that it’ll be desktop published and made available on the druginfozone website in a couple of weeks.

After checking and sending a few emails I don’t have time left to start anything else today. Tomorrow’s another day, though, and I’ve got plenty of new objectives to think about fitting around the current projects I’ve got on the go, and who knows what the next phone session will bring?