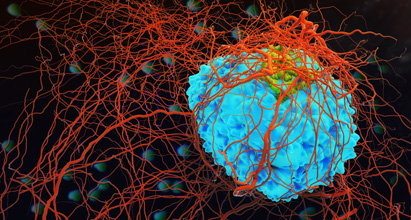 Melanomas arise from melanocytes (pigment-synthesising cells) found in the skin, eye, mucosal lining of the inner ear and the leptomeninges. Cutaneous malignant melanoma is the most prevalent form of the disease, and although a hereditary predisposition for melanoma has been correlated with increased risk in several genes, the epidemiological data clearly support the primary aetiological factor as being the ultraviolet radiation of sun exposure. An estimated 54,500 new patients were diagnosed for malignant melanoma, and there were an estimated 7,600 deaths from this disease in 2003 in the USA.(1,2) The incidence and mortality vary between countries in Europe, with northern European nations generally having higher rates.(3) Surgical resection of early-stage malignant melanoma offers a very reasonable survival rate; however, patients diagnosed with late-stage metastatic melanoma have an average survival of only 8.5 months.(4)

Current treatments
Conventional treatments of metastatic melanoma include single-agent or combination chemotherapy (drug cocktails), with response rates ranging from 15 to 25%, but usually at the expense of extensive systemic toxicity. Immunotherapies utilising particular immunomodulating cytokines (interferons and interleukins) as single agents have produced clinical endpoints similar to those obtained with chemotherapy alone, with a response rate of about 20%. Clearly, standard interventions are disappointing. Newer combinatorial treatments with both immunotherapy and chemotherapy drugs, referred to as biochemotherapy, have shown some exciting initial results, with responses approaching 50%, but improvements in long-term survival are still not clear, as clinical studies are ongoing. Since melanoma cells are considered very antigenic, innovative experimental strategies have also focused on both active and passive vaccination procedures to generate antitumour immune responses.(5,6)

Antisense therapy
Gene therapy and antisense protocols constitute a more unique approach. Antisense oligonucleotide-based drugs are small, chemically modified strands of DNA. These are designed to be opposite (anti) in sequence to the coding (sense) sequence of messenger RNA (mRNA) for the purpose of binding to that particular mRNA molecule. Upon binding to the mRNA, a duplex is formed that essentially targets this mRNA for degradation and thus inhibits the production of the intended protein.

In the case of metastatic melanoma, there is a particular emphasis on the use of Bcl-2 antisense “oligos” (Genasense(™) [Oblimersen sodium, G3139]). The Bcl-2 protein, which is an inhibitor of programmed cell death, or apoptosis, is overexpressed in more than half of all human cancers. By reducing the production of Bcl-2 in cancer cells, Genasense treatment attempts to restore the basic biological process and sensitise cancer cells to respond more efficiently to current methods of cancer-killing therapies.

Bcl-2 was first described based on its linkage to certain lymphomas.(4,7,8) It was subsequently found to have strong immunoreactivity towards cells of melanocytic origin. An obvious increase of Bcl-2 gene expression correlated with melanoma progression has been demonstrated by molecular and cell culture techniques.(8) These observations were further extended in animal models by Jansen and colleagues.(9) Furthermore, overexpression of Bcl-2 in mouse melanoma models promoted metastases.(10) This is complemented when considering the phenotypes of Bcl-2-deficient mice. The complete absence of Bcl-2 has a profound effect on melanocyte lineage, such that dramatic apoptosis can be triggered.(11)

With these current advances, some exciting clinical trials are ongoing with encouraging preliminary results, including a phase III randomised study of Bcl-2 antisense (Genasense) combined with a standard chemotherapy drug called dacarbazine versus dacarbazine alone in patients with advanced malignant melanoma (see Table 1). In an earlier phase I–II study, this treatment stabilised or reduced the disease in 57% of patients.(1)

Conclusion
The concept of restoring defects in the apoptosis machinery in melanoma offers a promising solution to augmenting traditional therapy regimens. With emerging molecular target-based drugs, it will not be surprising to see many apoptosis-based drugs entering the market over the next decade.

Cancer is considered a multifactorial disease in which several errors must accumulate over an individual’s lifetime; consequently, pending therapeutic tactics, such as combination therapy tailored to an individual that is based on a specific molecular profile, are rapidly becoming a reality. Our own retrospective study would suggest the development of a single antisense sequence targeting multiple antiapoptotic members of the Bcl-2 family. The prospects of improved treatment for metastatic melanoma are alluring.

Read the latest issue >
Be in the know
Subscribe to Hospital Pharmacy Europe newsletter and magazine
Subscribe
Share this story:
RELATED ARTICLES
Re-infection with COVID-19 is a cause for concern
Shire launches Fosrenol in Spain
Assessing the impact of drug packaging and labelling on patients
Potential treatment for peanut allergy protects but does not cure
Imatinib “helps preserve fertility”