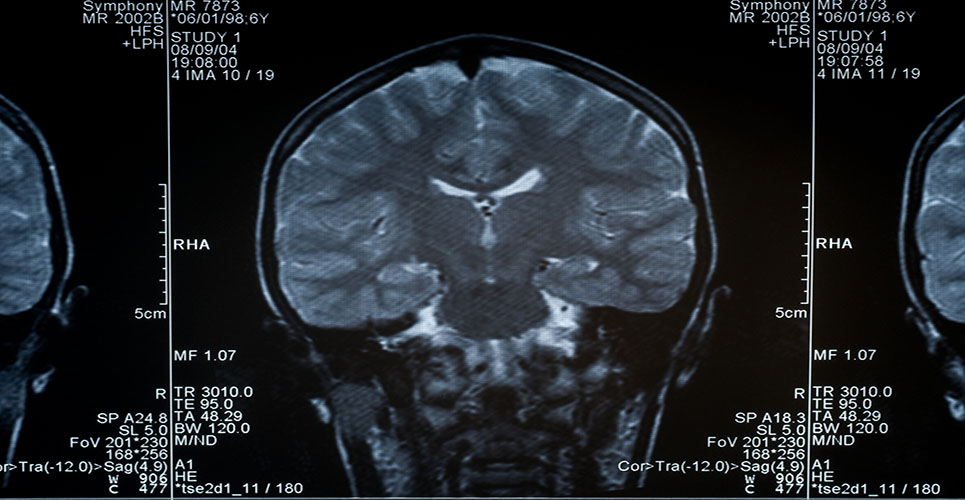 Alzheimer’s disease is a degenerative dementia. The characteristic of the dementia are cognitive impairments, difficulties in daily life activities, disturbances of mood and behaviour, and progressive loss of autonomy, so that patients need help from their family and friends, who then become caregivers.

The diagnosis rests on assessment of the clinical characteristics of the disease and on examinations that aim at understanding the mechanism and aetiology of the dementia. The evolution is variable, but the clinical symptoms progressively worsen and multiply. The patient progressively becomes more dependent.

Impairment of episodic memory is the earliest and most frequent clinical symptom in Alzheimer’s disease (AD). Episodic memory is related to events or information that a subject personally experienced or learned, and that occurred in a precise temporal and spatial context. A frequent patient complaint in AD is forgetting recent conversations or information. Normally, elderly people would try to overcome these difficulties by paying more attention to information, by using strategies to remember associated ideas concerning an event, or by taking short notes. AD patients lack the cognitive resources that would allow them to build up these strategies.

Executive dysfunction is another early symptom. Executive functions allow us, for example, to programme our actions, to share attention between different ongoing activities, to elaborate new strategies in nonroutine situations, and to stop an activity when a new one becomes more important. Each AD patient will have different degrees of difficulties and different cognitive impairments that may affect temporal or spatial orientation, language (aphasia), complex gestures (apraxia), or interpretation of sensory information (agnosia).
On the other hand, there is also a variable preservation of cognitive functions and well-learned occupations. In AD there is a long-lasting preservation of procedural memory – this is a memory for tasks that have been learned through repetitive performance and that are relatively automated. Patients may remain expert in routine activities as diverse as cooking, playing bridge, historical knowledge or masonry. There is a theory that AD patients are essentially impaired in tasks where an effortful control needs to be exerted, but remain able to undertake activities that are more automatic for longer. Activities of daily living (ADL) are quite variable between subjects. In AD there is initially a characteristic change in more complex ADL. Managing finances, controlling new schedules for new medications, programming a complex journey using public transportation, or organising phone calls may become quite difficult. It is important to obtain information about specific interests that patients have lost at home or in social domains, and to search for a possible link with cognitive impairment.

Changes in mood may occur early. Depression may be an initial symptom of AD, or an early reaction to cognitive impairment. Anxiety is common in patients progressively losing their autonomy. Apathy is another common behaviour change in AD patients. Anosognosia is a difficult and important symptom. At different stages of the disease, patients may become unaware of their clinical deficits, so that the characteristic symptoms are only noticed (and reported) by their helpers. Several abnormal behaviours appear during the course of the disease that may be similar to “psychotic” symptoms.

The diagnosis of dementia is clinical. It rests on conversation with the patient and their relatives. Differential diagnosis of dementia includes, for example, forgetfulness associated with normal aging, major depression, or confusion related to systemic disease, metabolic disturbance or drugs. Specific symptoms of depression need to be checked for, and it is widely accepted that a trial with an antidepressive drug is mandatory if mood disturbance is seen. A general physical examination is required, and blood sampling may rule out metabolic problems. A complete neuropsychological evaluation is essential to differentiate mild cognitive dysfunction from normal aging. The testing has to be regularly updated as progresses are frequently made to improve the sensitivity and specificity of quantitative and qualitative components of cognitive tools. When dementia is diagnosed, clinical and paraclinical examinations aim at specifying the physiopathology and aetiology. Clinical symptoms may be characteristic of a nonAlzheimer’s dementia, such as prominent behavioural disturbances in frontotemporal dementia.

Brain imaging is required to rule out abnormalities such as tumour or hydrocephalus. Anatomical imaging is also used to assess the importance of vascular cerebral lesions. It is possible to assess atrophy of medial temporal structures, which are particularly affected by the lesions typical of Alzheimer’s disease, such as amyloid plaques and neurofibrillary tangles. It becomes possible to indirectly visualise in vivo those characteristic lesions.

A definite diagnosis of AD comes only from clinicopathological correlation between a clinical syndrome of dementia and neuropathological demonstration of amyloid plaques and neurofibrillary tangles. However, functional imaging provides pictures of the distribution of regional cerebral activity, indirectly reflecting deposition of AD lesions. Functional imaging gives arguments for the differential diagnosis of dementia. An entire diagnostic procedure allows the clinician to reach a clinical diagnosis of either possible or probable AD. The accuracy of a diagnosis of probable AD may be greater than 90%.

The evolution of AD is heterogeneous. The importance and the number of clinical characteristics is variable from the onset of the disease and through its entire evolution. The severity of dementia in AD is frequently classified in four stages. There is a stage where AD is questionable, because cognitive symptoms are very mild and isolated, without significant consequential effects on daily living.

When dementia is diagnosed, a mild stage corresponds to a situation where the patient can live relatively independently in routine circumstances. In a moderate stage of AD, patients need supervision in some ADL. In the severe stage of the disease, patients are completely dependent, and their dependence progressively increases for all activities. The combination of symptoms will determine the severity of the disease. It is important to make an early diagnosis to try to reduce the consequences of the characteristic symptoms of AD. Mood or behavioural disturbance should be treated adequately. All worsening and changes in circumstances should be monitored, such as the introduction of drugs.

According to the cholinergic hypothesis of AD, there is a specific loss of cholinergic neurotransmission in the disease. Drugs with anticholinergic action worsen cognitive dysfunction, while cholinergic treatments have a moderate clinical benefit on most clinical characteristics of AD.

A therapeutic programme should be drawn up as soon as possible. This must be regularly updated to adapt ADL and to optimise the use of the patient’s preserved cognitive functions. The role of caregivers and the social and medical environment are essential. For example, a patient with anosognosia might rapidly show a severe loss of autonomy if his or her clinical impairment is not compensated for by the intervention of caregivers. All those parameters play a symptomatic role in the evolution of AD. Ongoing research aims at unravelling aetiologic treatments that could act on the causal mechanisms of the disease.