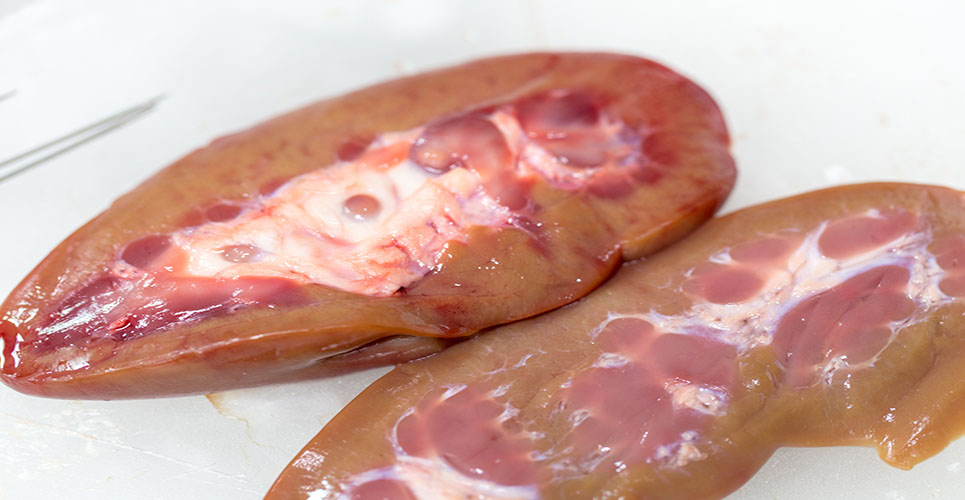 Renal diseases often progress to endstage renal disease (ESRD) and are an immense health and social problem. In the USA more than US$10 billion are spent annually on treating more than 330,000 patients.

There is a need to not only use available drug combinations, but also to search for novel therapeutic means to target pathophysiological mechanisms and prevent the progression of renal diseases. Evidence-based nephrology requires an objective assessment of all available facts.(2) Different mechanisms of disease progression that ultimately lead to renal scarring have been described(3) – these can be summarised in a multistep process in which the abnormal protein traffic through the glomerular capillary barrier is a key event (see Figure 1).

The reduction of urinary protein excretion with angiotensin-converting enzyme (ACE) inhibitors or angiotensin II (AngII) receptor antagonists has been shown to correlate with stabilisation and decrease of the rate of renal function impairment.(4,5)

To better describe the course of renal disease development with the idea of renoprotective options and reversibility of pathological changes, definitions of progression, remission and regression of proteinuric chronic nephropathies are provided in Table 1. These are based on the dynamic correlation patterns between renal structural changes, glomerular filtration rate (GFR) and proteinuria.(4) During the progression of proteinuric chronic nephropathies, the rate of GFR decline is faster than that associated with the normal ageing process.

We have shown recently that ACE inhibitors at dosages in excess of those required to normalise blood pressure are able to reverse established proteinuria and induce regression of lesions in a genetic rat model of progressive nephropathy.(5) This is consistent with findings of the REIN follow-up trial,(6) which documented the renoprotective properties of ACE inhibition(7) in patients with nondiabetic proteinuric nephropathies. The chance of nonoccurrence of ESRD in the group of ACE-inhibitor-treated patients (kidney survival curve) was higher than that in the group of patients on conventional treatment (RR[response rate]=2.19; 95% confidence interval 1.39–3.47; p=0.0006).

The renoprotective effects of ACE inhibitor therapy might occur independently of blood pressure control changes.(8) Indeed, it was observed in patients with proteinuric nephropathies that increasing the dose of the ACE inhibitor resulted in a parallel reduction in 24-hour urinary protein excretion rate, while the mean arterial blood pressure did not change significantly. The effect of ACE inhibition on the progression of nondiabetic renal disease has been confirmed by a pooled analysis of individual patient data from 11 randomised controlled trials.(9)

On the other hand, it has been reported that the regression of glomerulosclerosis with high-dose angiotensin II type 1 receptor antagonists is related to decreased intrarenal levels of plasminogen activator inhibitor. New glomeruli cannot be generated after full-term birth in humans, so regeneration of open loops has to occur by new capillary loop growth within injured glomeruli.(10) Therefore there is potential to interrupt or even reverse the destructive process within the kidney.

However, problems still exist with finding the best therapeutic regimen in nonresponders with various types of renal disease. For these patients, treatment procedures to remission and/or regression of chronic nephropathies must include a multimodal strategy (eg, modification of RAAS, lipid-lowering therapy, glycaemic control, modulation of disturbed circadian rhythm of blood pressure).(11)  Such an evidence-based algorithm to treat resistance and achieve clinical remission in renal diseases is presented in Table 2.

With this background, we instituted a remission clinic. Thirteen patients whose 24-hour proteinuria had been at least 3g for more than six months, and who had responded to the maximum recommended dose of an ACE inhibitor, were put on a low-sodium diet and a standardised drug protocol. Nine patients achieved complete remission of proteinuria and their functions stabilised after 3–24 months.(4) The other four patients remained nephrotic and their renal function deteriorated. The nonresponders had signs of active immune disease.

These preliminary results indicated that our approach is of value in reducing intrarenal adaptive changes leading to proteinuria and progression, once the original insult is over.

Recommendations and perspectives
Novel combination strategies designed to get more patients achieving remission and/or regression of renal diseases are summarised in Table 3. This multidrug treatment aims to reduce glomerular protein traffic and/or its effects on tubular cell activation by blocking inflammatory and vasoactive gene products that are upregulated by the excessive tubular protein reabsorption.

Trials of lipid-lowering therapy will provide more evidence on treatment effectiveness, especially in ESRD patients who are at major cardiovascular risk. However, since there is still much unknown about the levels of interaction between the risk factors of renal progression in specific populations (eg, high-risk groups of patients), the application of new intelligent problem-solving and decision-making approaches increases the degree of performance in clinical activity and could provide reliable additional objective-knowledge-based information to the physician’s opinion and decision-making practice.(11,12)

The decision-tree-based Bayesian approach, in combination with data mining and artificial intelligence neural network methods, does allow uncertain primary information on a constellation of risk factors to be processed and unstructured clinical problems to be solved. This type of model is expected to be very valuable within clinical settings where prior information about the patients is not readily available, especially in situations where the relationships between the disease-related clinical variables (ie, marker, predictors, risk factors, and so on) are not well understood (Dimitrov et al., 2001, unpublished data).

In this way, renal risk profiles at the population or single-patient level could be created and used to better individualise and optimise the treatment process in renal diseases and prevent the development of ESRD. Thus, the combination of data on drugs and disease progression with clinical trial simulations could promote informed drug development decisions(13) and cost-effective therapeutic strategies in nephrology.(12)