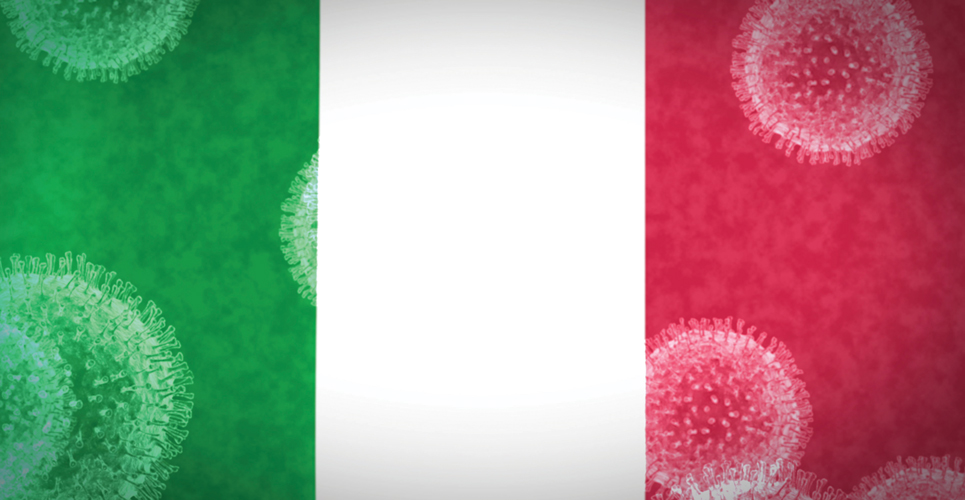 Although cases of COVID-19 were documented in other countries a little earlier than the first Italian cases, Italy was the first European country to be severely affected by the pandemic

The first cases of COVID-19 in Italy were diagnosed on 30 January 2020; these were two Chinese tourists who were visiting Rome. Other isolated cases – all arriving or returning from China – had already been reported in France (24 January) and Germany (27 January). At that time, isolated cases or small outbreaks, all related to people who had recently been to China, had been reported in most European countries.

On 20 February 2020, in a climate of growing concern, in which – however – the real risk still seemed ‘far away’ (the World Health Organization would only declare a Sars-CoV-2 ‘pandemic’ on 11 March), the Italian public and the world of healthcare were shaken by the news. The first Italian case (‘Patient 1’) was a 38-year-old man admitted to Codogno Hospital (in a village of 15,000 inhabitants in the province of Lodi, Lombardy, Northern Italy) with severe pneumonia and the need for ventilatory support in the intensive care unit. He was defined as Patient 1 because he was considered the first to fall ill with COVID-19 on Italian soil, having not made trips abroad previously.

Over the next 24 hours, another 16 patients between Lombardy and Veneto tested positive for Sars-CoV-2; all of whom had not travelled to China recently. This was the start of the outbreaks of COVID-19 in Italy. As of 1 March 2020, Italy had 3089 confirmed cases and 109 deaths, most of them in the northern regions, and was, by far, the European country most affected by COVID-19, second only to China and South Korea.

It was almost impossible to understand what was happening in Italy: we were the first western country hit by a large-scale spread of Sars-CoV-2, where the virus seemed to have arrived extremely suddenly and disruptively, thereby seriously impacting on the response capacity of the public health service.

Epidemiologists in regions of northern Italy were on the hunt for ‘Patient 0’; that is the person who – after returning from other countries already affected by COVID-19 – had infected Patient 1 and spread the virus between Lombardy and Veneto.

Over time, however, it became clear that there was no Patient 0 because Patient 1 was evidently not the first Italian case. In retrospect, the common opinion, and also the official position of the Italian Ministry of Health, was that the Sars-CoV-2 virus had already been circulating in Italy for at least a few weeks prior causing, for the most part, less acute (and therefore more difficult to identify) cases, together with sporadic cases of interstitial pneumonia (which is also associated with other infections such as influenza) that would go undiagnosed.

Which new strategies were adopted? ‘Red zones’ and lockdown

As early as 21 February, the Italian Prime Minister had ordered the creation of ‘red zones’ for the municipalities of Lombardy and Veneto, which were the most affected. Knowing that the situation was no longer contained at a local level, a national lockdown was decreed from 4 March, with the closure of schools of all levels, universities, and non-essential production sites and a lockdown on free movement.

The objective was to ‘flatten the curve’ of the infection, reducing the risk of saturation of the healthcare system resources, so as to be able to guarantee better patient care and provide time to find effective therapeutic strategies.

From the point of view of the organisation of health services, different Italian regions have adopted different strategies: in fact, in Italy, the public health service is organised and regulated on a regional basis by the relevant administrations.

In most cases, non-urgent clinical activity – on an in-patient and out-patient basis – was initially suspended. Emergency services (emergency room, acute hospitalisation, urgent surgery, deliveries, among others) and non-postponable activities (oncology services, for example) were maintained, while other elective activities were postponed.

In doing this, two things were achieved:

The lockdown had a significant impact on care activities: although these were not formally limited by law, worried and anxious citizens meant that hospitals and clinics – and even emergency rooms – were deserted. This is certainly because many individuals had preferred to postpone important but non-urgent visits and procedures; however, several facilities reported that there was also been a sharp drop in acute procedures, probably due to individuals’ (especially those most at risk) apprehension to go to hospital.

In Tuscany, the region is which I practise, clinical activity for patients with asthma and allergies was reduced by approximately 75%. Only emergency management and continuity of care for certain conditions remained active.

In our allergy and immunological clinic unit of the San Giovanni di Dio Hospital in Florence, a non-university centre, which is a referral centre for the territorial hospitals of most of the region, urgent consultancy services were maintained, as well as the continuation of treatments for subjects with life-saving therapies (for example, immunotherapy for hymenoptera venom allergy). Withdrawing these therapies would have greatly increased their risk of potentially fatal anaphylactic reactions. This required a considerable effort, in terms of clinical reorganisation and management of social distancing, considering that in our unit approximately 700 patients are currently treated with this therapy, and who, on average, return for treatment every two months.

Services relating to diagnosis of suspected drug and food allergies were also maintained; in this case, priority was given to subjects with a greater risk of a new reaction, or with established complex clinical circumstances.

Ensuring continuation of clinical assistance required a complete rethink of the organisation’s activities. First, the use of masks by both staff and patients were now mandatory. The use of disposable gloves (to be worn when entering the health facility) or frequent hand disinfection was also made mandatory for patients.

Access to hospitals and care facilities was limited to patients (and to a single companion in the case of minors or people requiring assistance), and visits to hospitalised patients were suspended or greatly reduced. Each subject’s body temperature was measured upon entering the hospital, while triage centres were set up in the remote emergency room where – in addition to the temperature measurement – a nasopharyngeal swab to test for Sars-CoV- 2 was performed. The first treatments – except in cases of emergency – were guaranteed at the same facility, whereas access to the hospital was possible only after the swab was processed, with direct dispatch to the ‘Covid’ ward if this was positive.

Inside the hospital, major reorganisation was required: separate routes for entry and exit were created in order to facilitate distancing, and the seats in waiting rooms were reorganised in order to guarantee a space of at least 1m between any individuals.

Personnel used different personal protective equipment according to the risk associated with their task. Everyone was obliged to wear surgical masks and disposable gloves when close to patients; the work surfaces had to be thoroughly disinfected between one patient and the next. In cases of assistance to people with fever or respiratory problems, and therefore the greatest at risk of already being carriers of COVID-19, disposable gowns and face shields were compulsory. In the Emergency Department, or in wards dedicated to the care of patients with COVID-19, the use of complete protective suits was imposed – which are still in use today, despite the improvement in the infection curve.

Italy has never been particularly rapid in embracing new technologies. However, since the March lockdown, many general businesses have had to offer their services remotely. Schools activated distance learning, and millions of office workers moved to home working, a situation that had been postulated for some time but never fully realised before the COVID-19 pandemic.

The world of healthcare had to transform itself in this way too: but it was not done so swiftly. The priority for healthcare facilities, in the early stages of the lockdown, was being able to respond (or organise themselves to respond) to the first wave of patients with respiratory failure from COVID-19.

Only when this goal (thanks to an increase in resources for intensive and sub-intensive care, and the reduction in the number of new cases 3–4 weeks after the start of the lockdown) was achieved, could the health facilities focus on new ways for the provision of non-urgent services.

As has already been the case for schools and other workplaces, technology has made an impact in the field of health too. The use of telemedicine services for all activities that could be carried out remotely has increased hugely.

It is surprising to think how the necessary technologies (just think of the video calls that can be taken via any smartphone, with which almost all of us are equipped) have been available for some time, but how, despite this, it is difficult to change established habits and ways of working. In Italy, in this regard, the majority of patients and health professionals had never used telemedicine services before this pandemic.

Today, a considerable number of the non-urgent clinical activities are carried out through telemedicine services. This is particularly useful for the follow-up of frail subjects, in order to limit the chances of infection. But it is useful in general to guarantee a better social distancing, also taking into consideration that – although the epidemiological condition has improved considerably since last March and April – still today and we do not yet know how long, we will not be able to use the facilities and waiting rooms in the same way we were used to before the arrival of this coronavirus.

Surely, the Sars-CoV-2 pandemic is one of the most dramatic global situations in modern times. Italy, for reasons still unknown, was the first European country to face the precipitous spread of this virus. Because of this, it was not possible to wait and take inspiration from the decisions made in other countries, which found themselves experiencing situations very similar to that in Italy but one or two weeks later: a short time interval, but with disastrous potential in the event of an exponentially growing epidemic such as this.

Errors of evaluation have certainly been made on many levels, but this is only to be expected in the face of a situation that has no equal in the last century. The only possible comparison is with the ‘Spanish ‘flu’ epidemic of 1918–1920, which occurred in a world so different from the present one that its precedent could be of no help.

As a health professional, my opinion is that Italy has coped courageously with this dramatic situation, and, in some ways, has been an inspiration for the choices that many other countries had to make – be it days or weeks later – during this pandemic.

At the time of writing, 35,154 people have died as a result of COVID-19 in Italy, which is one of the highest mortality rates per million inhabitants in the world. We have had to pay a very high price in terms of human life, not to mention accompanying psychological impacts and economic repercussions. But the health service and civil society endured, perhaps unexpectedly according to some observers, so much so that The New York Times conceded: “…when Italy was the stuff of COVID nightmares, Trump and Biden, and much of Europe, mocked it as a shorthand for uncontrolled contagion. Now the pariah has become a model – however imperfect – of viral containment as the US and Europe struggle.”

Now the situation here has improved, many families are taking vacation at the sea or in the mountains. But we are keeping our guard up, the memories of the days of March and April still etched in the minds of the population and the healthcare workers at the forefront of care. We sincerely hope a second wave of COVID-19 will not come, but if it does, we hope to be able to face this fully prepared.