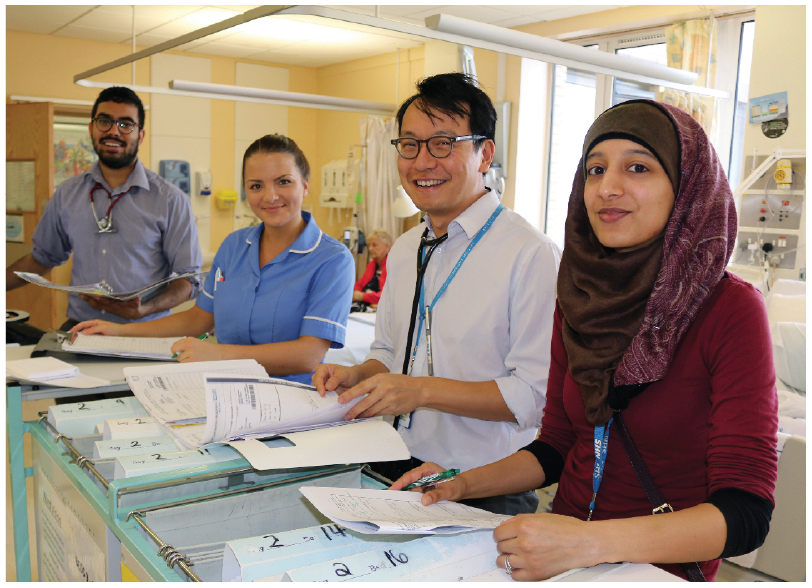 The dedicated ward pharmacy initiative at Royal Blackburn Hospital in the UK has resulted in falls in readmission rates, savings on medicines, more efficient discharges and improved the patient experience
Alistair Gray BSc (Hons) MRPharmS Dip Clin Pharm
Clinical Services Lead Pharmacist
Joanna Wallett MPharm (Hons) MRPharms Dip Clin Pharm IP
Senior Clinical Pharmacist (Cardiology)
Neil Fletcher BSc (Hons) MBA MRPharmS
Clinical Director of Pharmacy
East Lancashire Hospitals NHS Trust, UK
Email: [email protected]
Putting a pharmacist on a consultant-led ward round is nothing new;1,2 in fact, many of you reading this article will think, ‘Well, we do that’. And there will be many centres where this happens – often at large teaching hospitals and tertiary centres.
The reality for many hospitals is that resources are limited and a pharmacist may be responsible for ‘covering’ two, three, four or more wards, with or without the support of a pharmacy technician. This is what pharmacy services were like in 2013 in East Lancashire Hospitals NHS Trust (ELHT) before a series of pilots led to the development and roll out of the Dedicated Ward Pharmacy project (DWP). This is the story of how we got there, what we did, what we found out – and of persistence and serendipity. Fig 1: Changes in discharge time before and after DWP pilot
There was a weekly average of 185 pharmacy interventions made, including:
Service questionnaires were completed by patients, doctors and nurses, and all were overwhelmingly positive. Additionally there were many unsolicited comments made; this from a respiratory consultant really getting to the core of what DWP does:
“I would like to thank all of you on the new initiative for Janette (pharmacist) to attend my ward round on C7. I have found this to be very useful in patient management for the following reasons:
1) Drug charts accuracy has improved significantly
2) Discharge planning regarding medication is discussed well in advance
3) Drug interactions and inappropriate medications are highlighted
4) Any drug information is available at bedside during ward round
5) Nurses’ and doctors’ education
6) Lastly, Janette has become a very important/essential part of the multi-professional team looking after complex needs of patients
I hope this is not a pilot project and will continue in future. I would very much like it to happen on C8 too.”

We continually found that patients were getting better, faster and then staying healthy at home. Drug acquisition costs were reduced, patient safety was improved, and both staff and patient experience were improved. Scaling this up across the Trust offered the tantalising prospect of improving patient flow right back to the front door in the ED, and the possibility of requiring fewer hospital beds, or at least reducing the ever-increasing demand on existing (finite) capacity.
A new business case was created that went through various iterations as it progressed through ever-more senior committees until it was eventually given approval to proceed with a couple of caveats. Our desire was to roll the model out to every ward in the Trust and include an enhanced service at weekends, which would mean recruiting 23 extra pharmacists (11 band seven, 12 band six) and 11 extra technicians (5 band five, 6 band four – not every ward needs a dedicated technician) at a total cost of £1.3 million.
The caveats were that recruitment would come in three phases as pump-priming was required to produce the financial benefits that ultimately would make the model self-sustaining. The projected savings when annualised to Trust level were large: £726,000 in drug savings and £540,000 savings due to a 65.5% reduction in patients being readmitted (1060 fewer readmissions).
The value placed on the reduction of readmissions was a very conservative estimate.  There are many ways this value can be calculated, for example, Lord Carter’s report suggests each patient episode costs £35008 and this figure would have produced a much greater estimated saving. Similarly, the reduction in LoS will have a financial benefit but proving this in accounting terms is complex.
DWP – phase one
Phase one recruitment took place over the summer of 2016 with an additional eight pharmacists and six technicians joining the organisation, although due to some internal movement and natural turnover all the new positions will not be filled until early 2017. Enough people had completed their induction by October to enable the roll out of DWP to four additional wards: B18 (cardiology), D1 and D3 (endocrinology) and the surgical triage unit (STU). When completed, we will have 15 wards in medicine operating the model plus STU, which previously did not have a pharmacy presence.
New wards have been added stepwise and interventions corroborating the previous findings in terms of safety and fiscal indicators are being observed. A total of 1732 interventions were recorded between September and October (Table 1).

Table 2 shows an extrapolation of drug savings from this period; this is slightly less than the four-ward pilot phase but was attributed the fact that two of the pharmacists involved had not recorded all their interventions, including their successful IV-to-oral switches. This pattern can be seen in both tables and was discovered when retrospectively analysing the data. Pharmacists and technicians have had this feedback, and intervention data gathered in November 2016 now suggests a potential annualised saving of £1,388,705.

DWP – phases two and three
The next planned assessment point for the project is March 2017. The outcomes from phase one will be analysed and if these continue to be favourable, will trigger funding for phase two. In this phase, the service will be extended to include surgical wards and remaining medical wards. The effects of phase two will be analysed later in 2017 and hopefully release phase three funding, which will pick up all remaining wards and provide additional resource at weekends.
The enhancement at the weekend is to support consultant-led ward rounds taking place at that time. We are finding that many of the benefits of DWP  result from the pharmacists’ presence when prescribing decisions are being made rather than chasing up queries hours or days later. (The prescribing error rate for consultants is reported to be 5.9%).9 DWP is ensuring the right medicines are being prescribed at effective doses, for the correct duration and timely discharge planning is made possible. The rationale for starting, stopping and changing medicines is captured, supporting effective transfers of care.
Beyond DWP
An unexpected benefit of the recent junior doctors’ strike was that our non-medical prescribing pharmacists came to the fore. A prescribing pharmacist worked on one of the DWP wards and undertook much of the routine prescribing during the strike.  For the first time, the consultant really saw how a pharmacist can support the MDT with practical prescribing support.
Our aim is to increase the numbers of non-medical prescribers we have and take this one step further by giving them advanced practitioner skills so they can be more involved in monitoring and intervening in patient care. Some of this will be through internal training but, increasingly, courses are being offered that deliver these skills.10 For example, in ELHT, we have the North West region’s first ED advanced pharmacist practitioner (follow her on Twitter: @EDpharmpract).
We believe that spreading the model to allow other pharmacy teams and their patients to gain the safety and experiential benefits is important; the spread of innovation within the NHS is traditionally poor. To this end, we have been in contact with the School of Pharmacy at Manchester University and Greater Manchester AHSN to evaluate the research potential of DWP.
It is highly likely this will produce a research project examining the data and identifying if DWP improves patient flow without affecting safety. Other Trusts will want robust evidence to support such a ‘speculate to accumulate’ investment, and we very much hope this research will provide this evidence.
Keep up to date with developments on Twitter – follow @ELHTpharmacist and #DedicatedWardPharmacy.
Key points
References