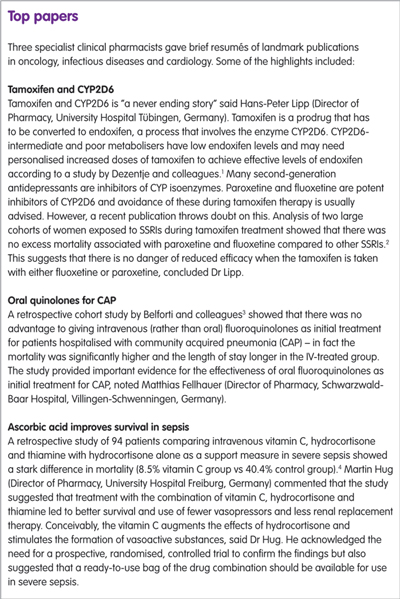 Advanced therapy medicinal products (ATMPs) represent a young and fast-moving field in which regulations tend to follow developments, Lenka Taylor (Head of Clinical Trials, Pharmacy Department, University Hospital of Heidelberg, Germany) told the audience. ATMPs comprise gene therapy (GT) products (often genetically modified organisms (GMOs)), somatic cell therapies (SCTs) and tissue-engineered products (TEPs).
The overall framework for ATMPs is EC Regulation 1394/2007. This has been followed by a number of Directives concerned with, for example, blood products, genetically modified organisms and traceability of materials, she explained. In addition, in 2015, Article 5 of the Regulation called for specific good manufacturing practice (GMP) provisions for ATMPs.
Environmental risk assessments (ERAs) have to carried out for all genetically-modified organisms before a clinical trial certificate can be issued. The ERA must consider all possible damaging effects on people, animals, plants, micro-organisms and the wider environment. In addition the measures for safe handling must be fully specified. For example, a genetically modified measles virus was classified as ‘biological safety level 2‘ (BSL2). This is a higher level than the vaccine strain of measles because the organism has been processed differently, she noted. The ERA document also describes management strategies for risks arising from ‘deliberate release’ – in this case application to patients – of the GMO and how non-patient exposure to the GMO should be handled.
In 2015, a statement from the Federal Institute for Vaccines and Biomedicines in Germany (Paul-Ehrlich Institute) clarified the scope of ‘deliberate release authorisation’ of a GMO in the framework of the clinical trial. It contained important provisions for pharmacists, said Dr Taylor. The statement said that ‘deliberate release authorisation’ covered not only administration of the GMO to a patient but also short-term storage and transport of the material. Consequently, the ERA now has to specify the requirements for short-term storage, reconstitution and preparation, in-house transportation and disposal of waste products. Given the importance of these elements to pharmacists, Dr Taylor, together with other specialist colleagues, had met with the representatives of the Institute to discuss the type of provisions that are feasible and appropriate in hospital pharmacies involved in the use of GMOs.
Three gene therapy products have now been authorised in the EU – a viral vector for lipo-protein lipase deficiency, an oncolytic Herpes simplex virus for treatment of malignant melanoma and genetically modified autologous bone marrow cells for adenosine deaminase deficiency.
Two somatic cell treatments have been authorised in EU. One of these is genetically-modified allogeneic T-cells for treatment for patients with high-risk haematological diseases and the other autologous dendritic cells used for treatment of prostate cancer. (This product was withdrawn in 2015 for unknown reasons.) TEPs contain cells or tissue of human or animal origin that have been ‘substantially manipulated’. Two TEPs have been authorised in the EU. One comprises corneal epithelial (limbal) cells used to treat corneal burns. The other comprises autologous cartilage cells that have been grown in a laboratory and selected for specific protein markers.
In practice, tissue could be collected from a patient in hospital and then manipulated in a factory before being returned to the hospital for aseptic preparation by the pharmacy and administration to a patient. Such products are often packed in ‘dry ice’ and have to be thawed before use. The pharmacy needs to have suitable areas for receiving, storing and thawing these products. It is also important to know how long the thawing process takes and what the final product should look like, said Dr Taylor.
A report in 2015 showed that there were 654 trials of investigational ATMPs (ATIMPs) in progress, comprising 187 TEPs, 160 GTs and 307 SCTs.
Many aspects of the use of ATMPs are being actively discussed in an effort to make these treatments safe and available throughout the EU. In conclusion, Dr Taylor noted the diversity of ATMP products makes regulation complicated. However, the pharmacist can be a competent partner for academic producers of ATMPs. Furthermore, there can be no doubt that ATMPs are medicines and therefore should be supervised by hospital pharmacists.