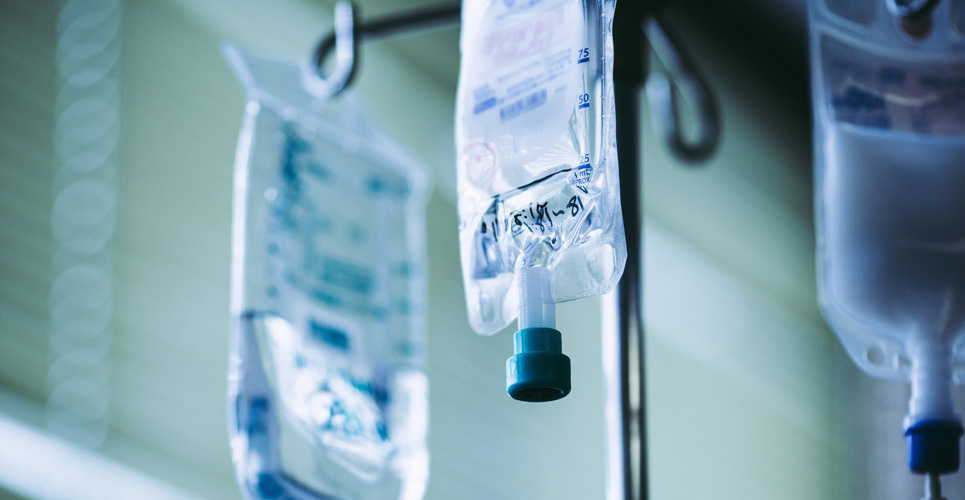 Fluid management in the peri-operative period

Fluid management in the  peri-operative period is a controversial topic and subject to much debate on which are the most favoured approaches. Recent studies suggest that ‘traditional’ management may result in excessive administration leading to salt and water overload and ultimately pulmonary oedema. Current evidence now favours a more tailored ‘flow-guided’ approach,1 measuring parameters and looking at the needs of the patient in order to maintain an optimised therapy.

In 1999, the National Confidential Enquiry into Patient Outcome and Death (NCEPOD)2 reviewed peri-operative deaths in the UK. The review suggested that inappropriate fluid management during the peri-operative period contributes to serious post-operative morbidity and mortality. Reporting staff inexperience is a major contributing factor and highlights the need for increased training and awareness of what is deemed to be ‘good practice’; fluid prescriptions remain extremely variable with many patients receiving suboptimal care.2 This was highlighted further in a survey carried out by The Royal College of Surgeons of England3 where the attitude of consultants to  fluid and electrolyte prescribing were assessed. The majority of consultant surgeons felt that the junior doctors  were not adequately trained in such prescribing and only 30% believed that their patients were receiving correct doses of water and electrolytes.

Aim of peri-operative fluid management
The aim of peri-operative fluid management is to ensure that an adequate intravascular volume is maintained with a correct equilibrium of electrolytes and acid-base balance. Optimising fluid therapy is essential in reducing post-operative complications and maintaining organ perfusion.4 It remains a vague and greatly debated topic owing to the lack of substantial trial data and the inability to quantify and measure certain parameters to maximise therapy.

Fluid movement and the  Starling equation
Typically, the total body water for a 75 kg individual is approximately 45l. This is divided into intracellular water (30l) and extracellular space (15l), which itself comprises intravascular (3l) and extravascular (12l) compartments.5 Water is distributed throughout all of the compartments and moves freely between cell walls, with the energy-dependent ion exchange pumps maintaining a sodium gradient across the cell membrane by osmotic forces. The movement of fluid across capillary membranes is described by the Starling equation (see Figure 1).5  In theory, this illustrates the role of hydrostatic and oncotic forces by diffusion and filtration and explains the development of oedema. Plasma proteins, such as albumin, are osmotically active solutes and can move between plasma and interstitial fluid because of oncotic pressure. If the integrity of the capillary  is compromised, this allows the passage of albumin into the interstitial compartment, which results in accumulation of fluid in the tissue.4 In clinical practice, the Starling equation has a very limited role owing to the extreme difficulty in measuring all of the variables in a patient. However, it does demonstrate that increases in vascular permeability due to inflammatory responses, specifically surgical tissue trauma, will greatly affect the distribution of fluid within the cells.

The volume of fluid distribution within the cellular model described is greatly affected by surgery because vasodilation and fluid movement between compartments reduces circulating volumes. This is known as third space losses, where fluid is lost into transcellular fluid spaces such as the bowel lumen and peritoneal cavities. This is an acute shift and the fluid will gradually be re-absorbed over time but it still equates to external losses in the short-term period. This is common in major trauma, burns and intra-abdominal surgery.5 It is therefore important to distinguish between the type of surgery, the patient’s condition and factors leading to hypovolaemia or tissue hyperperfusion at each stage of the peri-operative process in order to reduce the incidence of morbidity.

Crystalloids versus colloids
To prescribe intravenous fluid, it is important to identify the depletion and the specific losses that need replacing.  In the acute phase, resuscitation may be required to restore an adequate circulating volume, followed by maintenance therapy to sustain the patient’s normal condition.

Colloids are available as proteins (albumin, gelatin) or, more commonly, non-proteins (starches, dextrans). The molecular size of colloids varies considerably, and it is this that determines the colloid’s physiological properties. Colloids remain in the intravascular space for a greater length  of time than crystalloids, and therefore require a smaller volume to achieve the same result. This greatly reduces the risk of oedema and is the reason why they are considered to be superior in resuscitation. However, because of the well-documented adverse effects of colloids, such as haemostatic impairment and anaphylaxis, there has been much debate on their effectiveness and risk of morbidity. Such side effects have led to the introduction of newer ‘balanced’ colloids such as Voluven, Volulyte and Isoflex. These are osmotic starch derivatives that are more physiological and less likely to cause colloid-induced hypercholoraemic acidosis.

Many clinical trials have compared the use of crystalloids versus colloids for fluid resuscitation but there is little evidence  to suggest any superiority of either one in terms of morbidity and mortality; there remains much controversy surrounding which type of fluid to use. With the lack of clear recommendations as to the preferred regimen, many clinicians use a combination of fluids in such situations.6,7

Pre-operative period
The hydration status and co-morbidities of the patient pre-operatively and the length of time he/she has been nil by mouth must be considered. The duration of the nil by mouth period should be kept to a minimum, with any deficit being corrected as early as possible. In conjunction with this is a possible history of diarrhoea and vomiting, blood loss, shock or the use of bowel preparations.  At this stage, replacement of any excess losses this may cause is essential. In 2009, the National Patient Safety Association (NPSA) issued a Rapid Response alert regarding the use of bowel preparations.8 The recommendations made were to undertake adequate clinical assessment before prescribing in order to avoid dehydration and electrolyte disturbances.

The effect that metabolic stressors have during surgery must also be taken into account when assessing a patient’s electrolyte and water requirements. There are two main components to the stress response: neuroendocrine and cytokine. The neuroendocrine response is stimulated by pain and can be controlled by neuromuscular blocks from regional anaesthesia and analgesia. The cytokine response is stimulated by local tissue damage at the site of surgery. The stress of surgery increases levels of plasma cortisol and aldosterone and induces anti-diuretic hormone (ADH) activity, resulting in salt and water retention. This can be exacerbated further by poor renal perfusion and intra-operative hypotension and hypovolaemia. The concentration of ADH can increase up  to 100-fold and will remain elevated for several days following surgery because  of third space losses and the effects of medication used during anaesthesia.4 Knowledge of such stress responses  plus any deficit or excess losses must  be identified when prescribing fluid regimens at this time.9

Intra-operative period
Correcting the fluid balance at the pre-operative stage aids with the management during the intra-operative phase, minimising complications and producing better outcomes post-operatively. Continuation of resuscitation may still be required. This has prompted the introduction of a ‘flow-guided’ approach to optimise the intravascular volume status and rationalise fluid administration. Measuring flow-related parameters, such as cardiac output and stroke volume, rather than the conventional variables (blood pressure, heart rate and urine output) benefits the patient and improve outcome. Several clinical studies have looked at this flow-guided or goal-directed approach compared with traditional methods of measurement.1 Results are favourable but more work needs to be carried out to ensure the results are more applicable to clinical practice. Consideration needs to  be made as to when this will be beneficial, that is, at what stage and in what type of surgery. Also, the practicalities of monitoring these indicators may not always be possible in the clinical setting. When direct-flow measurements are  not possible, hypovolaemia can be diagnosed by looking at pulse, capillary refill and venous pressure together with acid-base values.

Further development of monitoring systems is required to be able to assess and apply the values given. By whatever means the physiological endpoints are measured, be it by traditional or by flow-guided methods, titration of rate and volume in accordance with the observations made  is essential. Measurement of such parameters is not always necessary and  a more procedure-specific approach is required. Consider the type of surgical procedure and its impact on the distribution of fluid this may cause.

Post-operative period
On leaving theatre, the patient’s  volume status should be assessed. Adequate documentation of the type  of fluids given and fluid losses must be made to ensure that the ward staff and the team are able to continue with the management as the patient moves into the post-operative phase.9 Fluid resuscitation may still be required once the patient has returned from theatre depending on the extent of blood loss and third space loss experienced. Care must be taken to evaluate the patient’s fluid balance record throughout the whole of the peri-operative period, aiming to reach an overall zero balance. Traditionally, patients were administered 3l fluid in the immediate period following surgery and repeated on a daily basis. Clinical trials by Lobo et al3 compared the impact of fluid restriction against the traditional standard regimen. Results showed a reduction in length  of stay and complications when  patients were given less than 2l per day. Many trials have compared the liberal versus the restricted regimens, with conflicting results shown. This does  not account for individualisation and tailor-made regimens based on fluid balance records and other parameters  as discussed previously.

Post-operatively, it remains an important task to complete fluid balance charts, continuing to correct water and electrolyte deficiencies whenever necessary. Factors that can influence the balance at this stage include vomiting, high stoma output, perspiration (particularly if raised temperature), surgical drain and nasogastric tube outputs or vasodilation as a result of sepsis. Crystalloid fluids should be used to maintain homeostasis and ensure adequate urine output (50ml/hour), taking care not to cause hypernatraemia and hyperchloraemia by excessive administration of NaCl 0.9%.

Patients should be commenced on oral fluids as soon as they can be tolerated, with the amount they consume being dependent on their thirst, which is a mechanism in response to ADH secretion. Oral absorption can often be delayed following bowel surgery; this is evident with the absence of bowel sounds. Evidence surrounding the use of enhanced recovery now promotes the use of prokinetic drugs and high carbohydrate diets to stimulate gut motility and help prevent complications such as ileus and bowel oedema, consequently improving outcome and reducing length of hospitalisation.10 Recording fluid balances is still necessary once an oral diet has been resumed, particularly when monitoring urine and stoma outputs.

Conclusion
It is evident that fluid management in the peri-operative period is a crucial component of the recovery of the patient and of the success of the surgery. This is not merely about prescribing intravenous fluid for surgical patients but it requires an understanding of what to give, how much and when. Administering a correct dosing regimen for each patient will be very beneficial to his/her outcome. The introduction of goal-directed therapy, which is a more tailored approach, has taken fluid prescribing to another level. The evidence surrounding this is very strong but the limitations around the measuring and recording of the necessary parameters means that it is not yet common practice. However, it does highlight the importance of an individualised regimen that takes into account all of the factors influencing a patient’s fluid balance, including type of surgery, co-morbidities and third space losses, throughout the procedure. In the terms of peri-operative fluid management, it is clear that one size does not fit all.