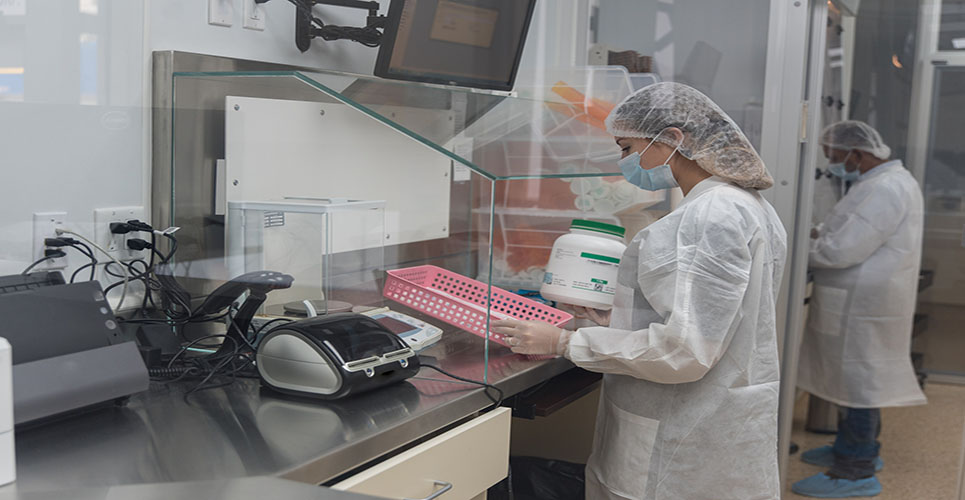 In the UK the standards for aseptic compounding in hospital pharmacies have come under close scrutiny during recent years. Aseptic compounding frequently involves the preparation of parenteral feeding solutions and cytotoxic drugs made specifically for individual patients. Many hospital pharmacies also provide a centralised intravenous additive service (CIVAS) preparing, for example, prefilled syringes or minibags containing additives. However, there continues to be manipulation of products on wards and in other clinical areas to enable administration to occur. Risk to patients from preparation of parenteral products in both pharmacy aseptic compounding units and on wards should be minimised.

Conditions for aseptic compounding
In 1991 hospitals were required to decide whether they needed a “specials” manufacturing licence from the then Medicines Control Agency (now the Medicines and Healthcare products Regulatory Agency), or whether they were able to operate utilising an exemption to the UK Medicines Act 1968.(1) The exemption allows preparation of aseptic products to take place provided five conditions are met:

These conditions must apply for aseptic products compounded for dispensing directly to individual patients.(2)

In 1996 the Medicines Control Agency (MCA) undertook an audit of a sample of unlicensed aseptic compounding units operating under these restrictions. They found that 60% of the units they inspected had significant deficiencies and that standards were well below those expected of units that held “specials” manufacturing licences. Later that year the Department of Health issued an Executive Letter that required all unlicensed aseptic compounding units to audit their standards.(3) The results were collated and published as a further Executive Letter  the following year.(3)

Until that time there was no requirement for unlicensed aseptic units to undergo external audit. However, the same Executive Letter initiated a programme of external audit by Regional Quality Assurance Specialists in collaboration with performance management. That programme is ongoing and has resulted in significant improvements in standards in, for example, facilities, documentation and training.

The NHS Pharmaceutical Quality Assurance (formerly Quality Control) Committee oversees the programme of external audit of nonlicensed units and works closely with the Medicines and Healthcare products Regulatory Agency (MHRA) to try to ensure consistent standards for unlicensed units and those with “specials” manufacturing licences.

Since 1996 there have been further MHRA inspections of samples of unlicensed NHS units, and these have shown steady improvement in quality. These improvements within hospital pharmacy aseptic units, which have been achieved largely through implementation of the audit process, are closely aligned with the concept of clinical governance. The UK government policy document The New NHS: Modern, Dependable introduced clinical governance and emphasised the importance of setting and promoting quality standards.(5) A further NHS Executive publication in 1996 required the setting of clear national standards and the need for consistent monitoring arrangements.(6) That philosophy is equally applicable in both the clinical and technical services settings.

Condition 5 (above) of those required for unlicensed aseptic compounding is that all activities should be in accordance with defined NHS guidelines. The most recent version of these guidelines was published in 2001(7) and includes slightly relaxed standards for products for short-term use (up to 24 hours).

Just as external audit was not generally applied to unlicensed aseptic compounding units in the UK before its introduction in 1997,(4) the internal audit process was not well developed at this time either. In fact, the Executive Letter in 1996, requiring those units operating under the exemption to the Medicines Act 1968 to partake in the internal audit of aseptic services, was often the first experience staff in these units had of this process.

In 2000 a series of Controls Assurance documents were introduced by the UK Department of Health.(9) These emphasise the importance of implementing and maintaining standards and indicate the high level of commitment to the audit culture within the NHS.

The standard for medicines management(9) requires regular audit of aseptic preparation within pharmacy and risk assessment of aseptic practices on wards. Studies in this latter setting have shown that the environment is far from ideal for carrying out aseptic manipulations and that training and procedures are of variable quality.(10)

Future developments in aseptic compounding should aim to transfer to pharmacy control those products currently prepared at ward level and assessed as having the highest risk .

The UK government has recently announced significant investment to modernise the NHS pharmacy manufacturing service in line with clinical governance principles. This process is currently being implemented by a national board, working in association with several multidisciplinary local groups. In addition to establishing a coordinated modernised service for the manufacture of traditional pharmacy medicines, such as terminally sterilised injections and dermatological products, it is envisaged that licensed units may also be able to support unlicensed aseptic compounding units that have limited resources and are working under restrictions (see earlier). An up-to-date product profile, based on clinical governance principles and assessment of patient need, should be the basis of the modernised pharmacy manufacturing service. By providing a range of ready-to-administer products, such as prepared doses of dose-banded cytotoxics, the licensed manufacturing units could release capacity to allow further developments in aseptic compounding units.

Conclusion
Over the past decade steady progress has been made in the UK to improve quality in aseptic compounding units, largely through implementation of audit and close cooperation with the regulatory authority.

At present there is increasing emphasis on assessing risk in aseptic manipulations currently being performed outside pharmacy control. It is hoped that the initiatives being implemented will contribute positively to the aseptic compounding agenda and will result in risk reduction for patients.