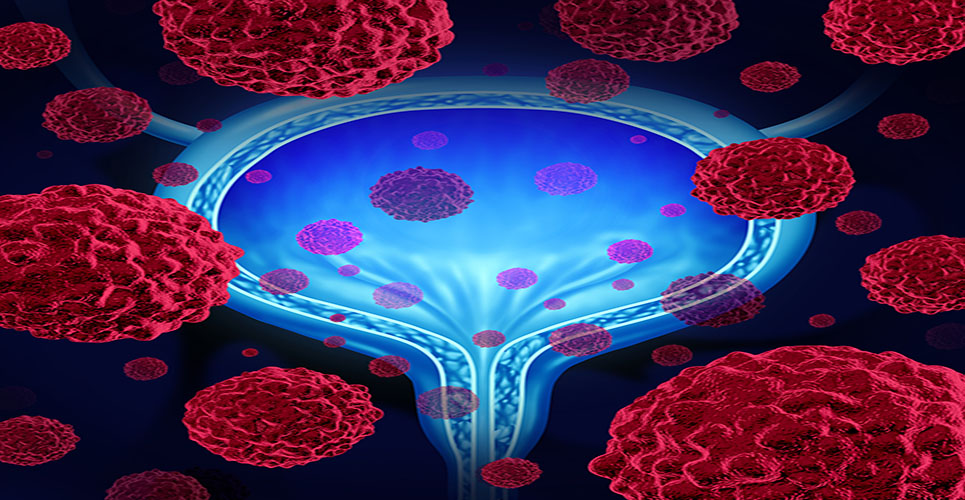 Known causes include exposure to aniline dyes and other substances previously used in industrial processes. The most common current risk factor is smoking.(1)

Bladder cancer usually presents as blood in the urine (haematuria), and the diagnosis is made by cystoscopy. Firstline treatment is endoscopic resection of the tumour. Histological examination shows one of three situations.

Although intravesical chemotherapy using agents such as thiotepa, ethoglucid and doxorubicin has been in use for many years, European practice is now almost entirely confined to the use of mitomycin C and of BCG (bacille Calmette–Guérin). Both agents are suitable for the first indication mentioned above; only mitomycin C for the second; and only BCG for the third.

Mitomycin C
Mitomycin C is an antitumour compound converted in the tissues to an alkylating agent that is cytotoxic (by disrupting DNA) and antimitotic (by preventing DNA synthesis). It must be made up under aseptic conditions and instilled into the bladder via a urinary catheter. The dose is usually 40mg in 40ml water. After reconstitution it should be used immediately. Contraindications are known hypersensitivity to the drug or an untreated urinary tract infection.

Mitomycin C for multiple superficial bladder tumours
Mitomycin C is given over six weeks, most commonly 40mg once a week. To reduce dilution of the drug by urine, patients avoid fluid intake for three hours and empty the bladder immediately before treatment. Patients taking daily diuretics delay the morning dose on the day of treatment.

After instillation of the drug the patient is asked to lie on their right side, left side, back and front for 20 minutes each to ensure complete coverage of the bladder. Side-effects are usually minor. The urine will be purple when the bladder is first emptied, owing to the colour of the drug. Many patients develop frequency of micturition due to bladder irritation for 48 hours after administration. This is eased by drinking copious amounts of fluids. Rarely, a systemic allergic reaction with skin rash will occur, preventing further treatment.

In 70% of patients there will be significant reduction in the number and size of tumours, and 30% of patients will have complete tumour clearance.

Mitomycin C for prophylaxis
A single dose of 40mg can be instilled into the bladder within 24 hours of tumour resection. The risk of subsequent tumour recurrence is reduced by 34%, and the recurrence rate per year by about 50%.(2) There is debate over whether mitomycin can reduce the risk of progression from superficial disease to invasive disease.

BCG (bacille Calmette–Guérin)
This live-attenuated strain of the causative organism of tuberculosis is the most effective treatment (other than radical surgery) for carcinoma in situ. For multiple superficial tumours it has a higher success rate than mitomycin C and reduces the risk of progression from superficial to invasive disease. However, the frequency and severity of side-effects is high, so for this problem mitomycin remains the drug of first choice for most urologists.

The action of BCG is associated with an intense inflammatory reaction in the bladder lining resulting in the accumulation of immune-competent cells.(3)

Because live bacilli are used there is a small risk of a systemic tuberculosis-like illness. Therefore the drug must not be used in patients with immunosuppression or those who have any febrile illness, and the patient must have been immunised (naturally or therapeutically) against tuberculosis. The most common contraindication is that the drug should not be used within two weeks of biopsy of the bladder or resection of a bladder tumour, since these leave a raw surface permeable to the bacilli.

The dose used provides between 3 and 9 x 10(8) colony forming units per instillation. The dose in mg to achieve this will depend on the commercial preparation used.

Administration
BCG must be reconstituted and used in a manner that gives protection to the pharmacist, nurse and patient. The pharmacist and nurse must wear a mask with eye protection, a disposable gown and sterile gloves. It is essential that catheterisation is atraumatic as severe systemic “BCG-osis” can occur if the urethral lining is damaged. However, the usual lubricants for catheters contain antiseptics and preservatives, which reduce the viability of the bacilli and compromise success.(4) The recommendation is to use no lubricant at all (females only) or catheters with a hydrophilic coating as used for clean intermittent self-catheterisation (males and females).

As with mitomycin, patients should withhold diuretics on the morning of treatment, restrict fluids for three hours before surgery, and pass urine immediately before treatment. They should then lie on their right and left sides and back and front for 15 minutes each and then try to hold on to the instillation for a further hour. When the bladder is first emptied a cup of household bleach should be poured into the toilet and left for 15 minutes before flushing. Men should sit down to pass urine for six hours after treatment to avoid spraying and contamination. Sexual intercourse is avoided for 24 hours, and a condom must be used for one week.

Side-effects and complications
Side-effects are common and occasionally very serious.(5) Seventy per cent of patients get mild fever, bladder irritation and flu-like symptoms for 24 hours after surgery. Paracetamol is helpful. If the fever is higher than 38.5(˚)C for more than 24 hours the patient should stop treatment and take isoniazid 300mg daily for three months. BCG treatment can be resumed when symptoms resolve. Allergic reactions producing a rash or muscle and joint pains should also be treated with isoniazid for six months, and BCG treatment should resume only if the benefits significantly outweigh the risks.(6)

Very few patients (less than 1%) develop “BCG-osis”, an acute severe illness with inflammation of the lungs, liver and kidneys. They need triple antituberculosis therapy (isoniazid, rifampicin and ethambutol) for six months and must have no further BCG. Very rarely an acute fulminating BCG sepsis occurs. As well as six months of triple therapy this may need urgent treatment with intravenous steroids.

Results
Eighty per cent of patients with carcinoma in situ respond, but half of these will relapse without further treatment. With further short (three-week) courses of BCG at three months, six months, 12 months and 24 months, about 65% remain disease-free.

Future developments
Improvements in BCG therapy are concentrated on reducing the dose while maintaining efficacy. New chemotherapeutic agents are under assessment (eg, valrubicin(7)) but are not in routine clinical use in Europe.

Conclusion
Intravesical chemotherapy with mitomycin C or BCG is a useful adjunct to standard endoscopic surgery. It can cure bladder cancer in some patients, and in others can reduce the time to recurrence and the risk of progression to invasive disease.