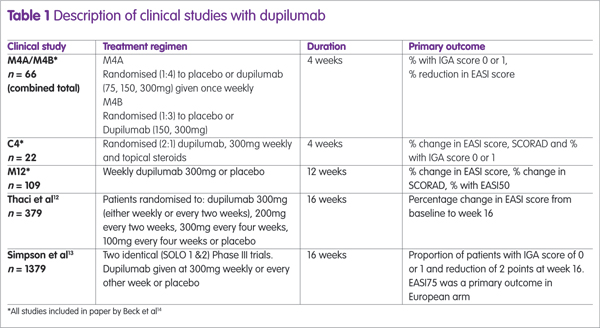 Management of patients with moderate to severe eczema

The cause of AE remains unclear, although is likely to be a combination of altered skin barrier function and immune dysregulation. Which aberration initiates events remains unclear and two opposing theories have been proposed. The ‘outside-in’ theory4 suggests that a genetic susceptibility produces a defective skin barrier, permitting the entry of allergens or irritants, thereby provoking an inflammatory response. Support for this theory arose from the discovery in 2006 that loss-of-function mutations in the gene that codes for filaggrin (FLG) was the underlying cause of ichthyosis, a dry skin condition, and that these mutations were a predisposing factor for AE.5 Filaggrin is a protein required for the production of an intact skin barrier and its amino acids contribute to the natural moisturising factor that helps maintain skin hydration.6 However, not all patients with FLG mutations develop AE and the alternative ‘inside-out’ hypothesis proposes that a dysfunctional immune response induces local inflammation, leading to the development of a defective skin barrier.7
Irrespective of the precise order of events, two cytokines – interleukin (IL) 4 and 13 – produced by Th-2 immune cells, have an important role in the initiation of AE symptoms and act via the same receptor, namely IL-4Ra.8 This discovery has stimulated a search for agents that block the receptor with a view to ameliorating the symptoms of AE.

Currently, mild to moderate disease is managed with emollients and topical steroids or calcineurin inhibitors. Unresponsive patients or those with more widespread disease are treated with either phototherapy or systemic agents.9 However, a recent review observed that while systemic agents are effective, all are associated with problems that limit their use.10 Consequently, a range of other agents have been investigated11 and one that has emerged and shown potential is dupilumab.

Dupilumab is a human monoclonal antibody that was approved by the US Food and Drug Administration in March 2017 for the management of adults with moderate to severe AE uncontrolled with topical therapies and granted a marketing authorisation from the Committee for Medicinal Products for Human Use in July 2017. As such, it is the first biologic agent for AE and represents an important therapeutic advance in the management of patients with more recalcitrant disease.

There are no ‘gold standard’ assessment tools for AE and several different instruments have been used and the most common ones have been described by the National Institute for Health and Care Excellence (NICE).9 Many trials use either the Eczema Area and Severity Index (EASI), SCORAD or an investigator global assessment (IGA), which evaluates severity on a scale from 0 (clear) to 4 (most severe). Investigators often report EASI50 or 75, that is, the proportion of patients achieving a 50% or 75% reduction in EASI score.
Dupilumab has been assessed in several clinical trials, either as monotherapy or combined with topical steroids (see Table 1). The largest studies were two identical Phase III trials (SOLO1 and SOLO2) and the proportion of patients achieving an EASI75 in these trials12 are shown in Figure 1, from which it can be seen that there is no difference between dupilumab given weekly or every other week (alt weeks in Figure 1). A summary of the main adverse events observed in the 52-week study are shown in Table 3. The reason for the high level of conjunctivitis is unclear, although symptoms were mild in the majority of patients. While experience to date with dupilumab is limited, the available data suggest that the drug is an effective therapy for those with moderate to severe disease. However, there are currently no clinical trials comparing the drug with existing oral therapies or in the paediatric population, which represents the majority of patients with AE. Nevertheless, as more real-world and trial evidence emerges, it is likely that dupilumab will become a valuable addition to the therapeutic armamentarium for those with moderate to severe AE unresponsive to topical therapies.