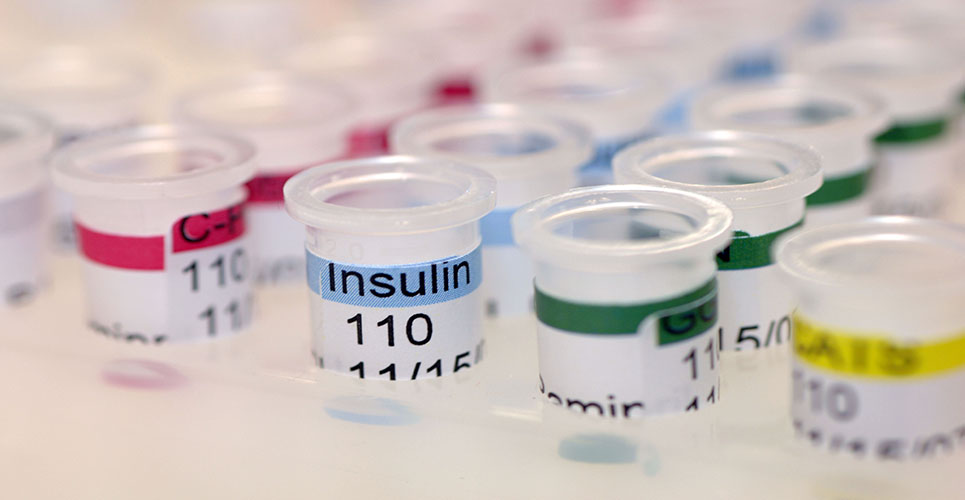 Diabetes mellitus is a condition characterised by raised blood sugar levels. In type 1 diabetes, the pancreas fails to secrete insulin and insulin is required to prevent death from ketoacidosis. Type 2 diabetes comes on slowly and is associated with both partial lack of insulin and insulin resistance. This type of diabetes is usually found in middle-aged or elderly patients and is a major health problem predicted to reach epidemic proportions by the year 2010. Obesity, hypertension, hypercholesterolaemia and hypertriglyceridaemia (the insulin-resistance syndrome) frequently accompany diabetes. Diabetes attacks both the small vessels, leading to blindness and renal failure, and the large vessels, leading to stroke, heart attack, gangrene and amputation.

The development of diabetes care has been through provision of clinics. Blood sugar can be measured in the laboratory from a venous sample or with a pocket-sized glucose meter. These are very accurate and easy for patients to use at home, and have revolutionised the management of diabetes, particularly of type 1. In hospitals they may be used at the bedside and the results can be downloaded onto a computer. The meters measure capillary blood sugar from a drop of blood taken by finger prick using one of the spring-loaded devices. Venous plasma glucose levels are interpreted as follows:

The basis of treatment of diabetes is to normalise metabolic abnormalities that occur in the condition. Hyperglycaemia is treated with insulin in type 1 diabetes, and strategies to improve insulin delivery and allow more flexibility in lifestyle include a multiple injection regimen where the patient is given a long-acting insulin daily to cover the basal state and a quick-acting insulin to cover meals. Insulin analogues are now replacing soluble insulin. These analogues have a quicker onset and are therefore particularly useful in the basal bolus regimens of active people who take a lot of exercise in an intermittent and unplanned way. Lispro insulin (Eli Lilly) was the first to be marketed, and recently insulin aspart (Novo Nordisk) has been introduced. These insulins improve diabetic control and seem to reduce nocturnal hypoglycaemia. Long-acting insulin analogues that have more reproducible reabsorption rates are being developed, and one of these, insulin glargine (Aventis), has now been marketed in many countries. Studies suggest that this insulin causes a smoother 24-hour blood sugar profile. In type 2 diabetes the major strategy in the obese patient is weight reduction, which improves insulin resistance and in many cases can normalise blood sugar, at least initially.

The next line of treatment is usually the biguanide metformin, which mainly acts to improve insulin resistance. Metformin is not associated with weight gain. If this is not successful a sulphonylurea is added which stimulates insulin secretion from the pancreas. New classes of drugs now coming on the market have a similar action to the sulphonylureas. Some such as nateglinide (Novo Nordisk) are based on the sulphonylurea molecular structure, whereas others such as starlix (Novartis) are based on an amino acid structure. As the UK Prospective Diabetes Study Group (UKPDS) showed,(3) it seems inevitable that although blood sugars are initially quite easily controlled in type 2 diabetes, they tend to rise, necessitating insulin treatment, and even with insulin there seems to be great difficulty ­keeping blood sugar levels in the normal range.

One of the major problems with diabetes is the onset of hypoglycaemia due to excess of insulin therapy, or in some cases excess of sulphonylurea therapy. Although hypoglycaemia is usually easily recognised by the patients and can be dealt with by taking sugar, on some occasions the hypoglycaemia comes on too rapidly for the patient to take counteractive measures, or there are no symptoms and the patient goes into hypoglycaemic coma without warning (hypoglycaemia unawareness). Hypoglycaemia unawareness usually occurs in patients who have been well controlled and who have become used to low blood sugars; thus the initial counter-regulatory hormones that cause symptoms, such as sweating, tremor, hunger, tingling around the mouth – all symptoms of catecholamine excess – may be missed, and the next stage, which is coma, occurs without warning. Although hypoglycaemia unawareness can be reversed by allowing blood sugars not to drop to low levels over a period of six months, it is a huge worry to the patient and their relatives. Hypoglycaemia which causes coma is damaging to brain cells and in very severe cases may lead to permanent damage.

The development of glucose-sensing devices that can be worn has been slow but there are two watch-type biosensors that are now on the market. The first one uses interstitial fluid and utilises an implantation of the probe into subcutaneous tissue.(4) This watch records subcutaneous tissue blood sugars on a regular basis over a three-day period, and the results can then be uploaded to a computer for a readout of blood sugars over the three days.

Another device that is on the market uses reverse iontophoresis to extract skin glucose.(5,6) The extraction measurements take 20 minutes, and up to three measurements per hour can be done. This machine will give direct readouts and has an alarm that can be set to warn for both low and high blood sugars. The machine can recognise excessive sweating, which interferes with readings, and will therefore disregard these readings. There is, however, an 18-minute delay between the measurement and blood readings. This delay and the problem of sweating may limit the usefulness of this watch for patients who have hypoglycaemia unawareness. However, the development of these watches will certainly make a huge difference to the management of diabetes in the future.

The breakthrough in diabetes management has come over the past few years with the demonstration in large trials that good care and control of diabetes prevents complications, both in type 1 diabetes in the Diabetes Control and Complications Trial (DCCT),(7) and in type 2 diabetes in the UKPDS.(3) These trials, together with evidence of the huge increase in diabetes worldwide, have convinced governments that investment in early detection and improvements in the delivery of treatment is worthwhile. Early detection should be particularly focused on middle-aged subjects with a family history of diabetes who are overweight and take little exercise. Women who have had a large baby are also at an increased risk, as are those who gain significant weight in middle age. Patients with hypercholesterolaemia, hypertriglyceridaemia or hypertension should be regularly monitored for diabetes.

The treatment of hypertension seems to be even more important than blood sugar in preventing cardiovascular disease. Angiotensin-converting enzyme (ACE) inhibitors have a special part to play, being particularly renoprotective. It is usual, however, to need more than one hypotensive agent, and it appears that there is benefit in lowering blood pressure below 140/80mmHg in people with diabetes. Thus meticulous attention to blood pressure has become particularly important since there is only very limited evidence that large vessel disease can be improved by blood sugar control.

The other major factor involved in vascular disease is dyslipidaemia. The statins have been shown to improve outcome in secondary prevention in diabetes,(8) and of course in primary prevention in nondiabetic patients. The recent result of the DAIS Study (Diabetes and Atherosclerosis Intervention Study) demonstrates the importance of fibrates in lowering triglyceride levels, and cholesterol and in preventing progression or indeed causing regression of atherosclerosis.(9) Thus the pharmacological treatment of diabetes is complex, requiring considerable expertise, in particular recognising the changing nature of the necessary treatment as the condition progresses.

At present pancreatic transplantation is the only treatment that restores normal glycaemia in type 1 diabetes. The procedure, however, is technically difficult with morbidity and mortality associated with it, and it is complicated not only by the lack of available pancreata but also by the dangers of long-term immunosuppression. Last year a group from Canada described for the first time a series of successful transplantations using isolated islet cells.(10) Their technique included new immunosuppressant drugs and avoidance of steroids. Their technique also involved a second or even third transplant as soon as there was failure of the initial transplant. This technique is being reproduced around the world in various centres with huge funding from the Juvenile Diabetes Foundation and the National Institutes of Health in the USA. Although this is an exciting development in the field of transplantation for diabetes, the technique is not likely to be the answer in the long term since two or even three pancreata would be necessary for one person’s successful treatment. To get over this problem two lines of research are at present producing very exciting results. The first is the use of stem cells (immature cells), which only recently were shown to be available in the ducts of the pancreata and can be grown into mature cells by multiple passage allowing a bank of islet cells to be produced.(11) Another exciting development has been the transformation of hepatocytes. A manipulation of these cells, both knocking out genes and inserting genes necessary for insulin secretion in animal studies, has been successful in reversing diabetes. Another development is the research into alginate envelopes. These envelopes have been constructed to house islet cells from other animals, and xenograft transplantation has been successful in animal models.(12) The hope is that pig islets may be utilised in this way to treat human diabetes. If development of the above strategies is unsuccessful it may be that the development of the artificial pancreas may be the way forward for the treatment of type 1 diabetes. The computerisation and the pump necessary for the delivery of insulin are already available, but we still lack a sensitive and robust glucose sensor.

In view of the huge predicted increase in type 2 diabetes over the next 25 years, it was exciting to read the recent article by Tuomilehto et al.(13) The authors chose patients who were likely to develop diabetes. They chose 522 middle-aged overweight subjects who had impaired glucose tolerance (it is known that impaired glucose tolerance almost inevitably progresses to diabetes(14)). The authors divided the subjects into an intervention group and a control group. The intervention group received individual counselling aimed at reducing weight, total intake of fat and intake of saturated fats, and also increasing intake of fibre and physical activity. The mean duration of follow-up was 3.2 years. Thus they chose a cohort that was very likely to develop diabetes, and indeed the cumulative incidence of diabetes after four years was 11% in the intervention group compared with 23% in the control group. The control group confirms the very high probability of developing diabetes if one has impaired glucose tolerance and is overweight. The risk of diabetes developing was reduced by 58% in the intervention group, and the reduction in the incidence of diabetes was directly associated with changes in lifestyle. In particular, none of the patients who were successful in four to five of the interventions developed diabetes. Other studies have also shown that programmes of exercise and weight reduction prevent the progression from impaired glucose tolerance to diabetes.(15,16) These are very important studies because they demonstrate the importance of preventive medicine in the fight against diabetes. In type 2 diabetes, the “glitazone” group of drugs that improve insulin resistance may prove to be of large benefit in the future, although to date the treatment of insulin resistance per se has not been shown to be of importance.

The future strategy for governments is to allocate large resources to the prevention, early detection and expert treatment of type 2 diabetes. Governments must be persuaded that this is cost-effective in both human and economic terms.