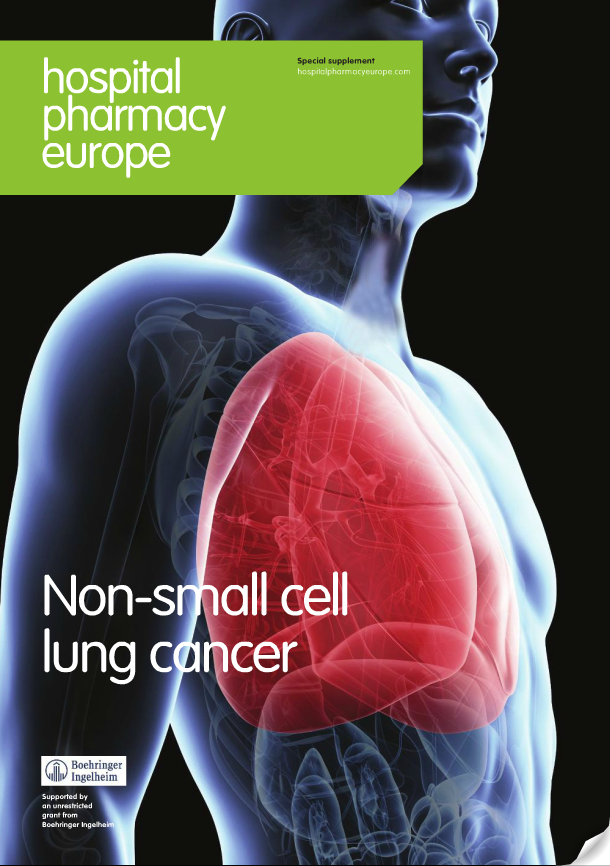 Lung cancer is the leading cause of cancer death in most developed countries, and every year 1.2 million new cases are diagnosed worldwide.(1) The most common type, representing approximately 80% of the total number of lung cancers, has a nonsmall-cell histology. Unfortunately, the majority of nonsmall-cell lung cancer (NSCLC) patients are at an advanced stage of the disease at the time of diagnosis. Chemotherapy is under investigation as a neoadjuvant and adjuvant strategy at the early stages, and some progress has been achieved in the treatment of locally advanced and advanced disease, but treatment outcomes for NSCLC are still very poor. New hopes come from a better knowledge of tumour biology and of the mechanisms of oncogenesis, with several new potential targets suggested in clinical research for cancer therapy.

Early stages
Surgery is the only curative treatment for NSCLC. Unfortunately, only 15–20% of tumours can be radically resected and, overall, the percentage of radically resected patients with 5-year survival is approximately 40%. A meta-analysis evaluating data available from 4,357 patients included in clinical trials comparing surgery with surgery plus adjuvant chemotherapy showed a 5-year survival benefit of 5% for patients undergoing cisplatin-based chemotherapy.(2) Following this meta-analysis, randomised trials including old cisplatin-based regimens have not reported a survival benefit for the use of adjuvant chemotherapy.(3,4) However, some large randomised clinical trials on platin plus new drugs (eg, vinorelbine and paclitaxel) are ongoing, or have recently been completed with pending results. Recently, two randomised phase III trials, the International Adjuvant Lung Cancer Trial (IALT;  Le Chevalier, ASCO 2003) and a Japanese trial (Kato, ASCO 2003), have reported positive results and support the use of adjuvant chemotherapy in resected NSCLC, although there is currently no definitive agreement on this topic. Regarding the role of postoperative radiotherapy, a meta-analysis demonstrated no advantage for this therapeutic approach.(5) To date, no postoperative treatment has been advised in clinical practice. Presently, the use of induction chemotherapy at stage IIIA NSCLC seems justified based on positive phase III and extensive phase II data.(6,7) However, a French randomised phase III trial of preoperative chemotherapy at early-stage NSCLC (clinical stages IB, II and IIIA) found a statistically significant survival advantage for stages IB and II only.(8)

Locally advanced disease
About one-third of NSCLC patients are at a locally advanced stage of the disease when diagnosed. The prognosis is poor, with 5-year survival rates of 13 and 5% for clinical stages IIIA and IIIB, respectively. Multimodality treatment, including chemotherapy, radiotherapy and, in selected cases, surgery, is considered the standard approach. Meta-analysis including data from 3,033 patients has shown a significant survival advantage, with an absolute benefit of 2% at 5 years for combined chemo- and radiotherapy, compared with radiotherapy alone. The best combined modality of chemo- and radiotherapy is yet to be determined. Two randomised studies have shown a modest survival improvement favouring the concurrent approach, but with increased toxicity.(9)

Development of new biological agents
As the understanding of tumour cell biology has increased and several molecular targets for NSCLC have been identified, a number of new biological agents have been developed. These agents have been introduced in clinical trials, and some phase III studies have already produced the first definitive results. Any categorisation of these agents is difficult, with overlap in several features. In the present article, vaccines and gene therapy are not presented, and the remaining targeted therapies are classified as follows: epidermal growth factor receptor (EGFR) family inhibitors, angiogenesis inhibitors, signal transduction inhibitors, apoptosis inducers and eicosanoid pathway inhibitors (see Table 1).

Future directions
Conventional treatment of NSCLC has apparently reached a plateau of effectiveness in improving survival of NSCLC patients. The improved understanding of the molecular basis of tumourigenesis and cancer diffusion has allowed several novel targeted agents to be introduced in clinical evaluation. Currently, few of these new drugs offer the promise of improved outcomes, and negative results are more common than positive ones. Disappointing results should not be considered definitive, and the important lessons learned from this first generation of clinical trials should be considered as the first step of clinical research in this field.

The optimal methodology for clinical trials and the best way to combine biological and cytotoxic agents is probably not well known yet. Moreover, there are several levels of stimulation of the targets along the several pathways of signal transduction that lead to neoplastic events, and blocking only one of these pathways allows others to act as salvage or escape mechanisms for cancer cells. Preclinical evidence of synergistic effects has recently emerged,(12–14) and clinical trials of multiple-targeted therapy are ongoing.

Another point to be considered when designing future clinical trials is the phenomenon of unrecognised molecular heterogeneity.(15) Solid tumours probably possess different “destinies” based on their molecular profiles. Modern cDNA array and proteomics-based approaches and correlations of their data with clinical response may provide a set of molecular markers predictive of response.(16)