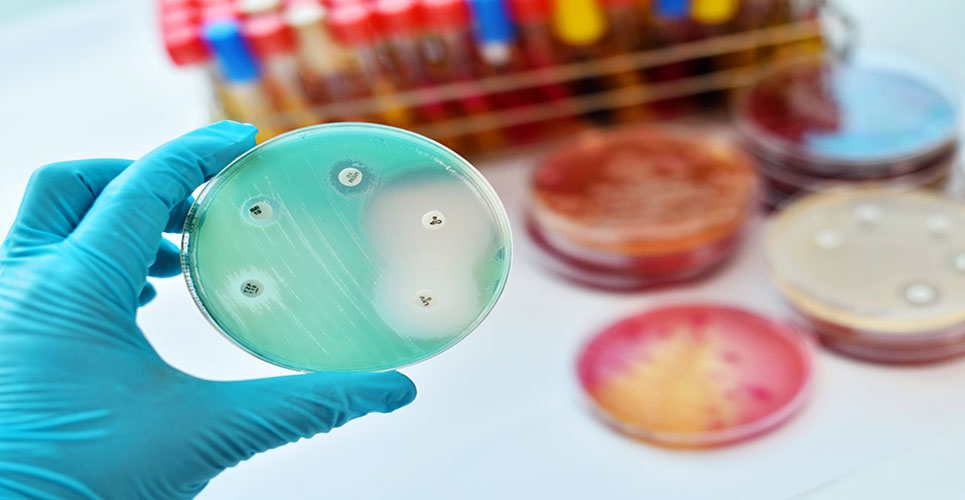 Antibiotics are chemicals produced by one microorganism (or similar chemical agents in low concentrations) that inhibit the growth of other microorganisms, and include antibacterials and antifungals. Antiviral drugs are chemically synthesised and specifically inhibit viral replication. Antiprotozoal drugs include antimalarials, amoebicides and trypanocides. The term “biocide” is used for chemicals that possess antiseptic, disinfectant and/or preservative activity.(2)

In the previous article (in the last issue) we looked at drugs other than antibiotics that possess or enhance antimicrobial activity, including local anaesthetics (LAs), CNS depressants and selective serotonin reuptake inhibitors (SSRIs). In this article we shall look at the potentiation of antibiotic activity.

Ways of enhancing antibiotic activity include:

Of these, the first two are currently of the greatest clinical relevance.

Pharmacologically active drugs as antibiotic enhancers
Since several pharmacologically active drugs (PADs) possess antimicrobial activity (see HPE 2002;3:37-9), it is pertinent to consider whether they can enhance the activity of antibiotics and, if so, what mechanisms are involved. Kramer et al. have described the enhancement of activity of an antiseptic mouthwash by LAs, but the mechanism remains unclear.(3) Amiloride, a diuretic that inhibits sodium reabsorption, potentiates the activity of tobramycin against pseudomonas isolates,(4) again by an unresolved mechanism.

Phenothiazines
An early description of the use of phenothiazines in retarding the emergence of isoniazid (INH)-resistant mycobacteria was provided by Manion et al.(5) Kristiansen, Amaral and their colleagues have built on these original findings,(6–9) using chlorpromazine (CPZ) and thioridazine as examples of phenothiazines. CPZ is potentially useful for treating mycobacterial infections – there is synergy observed between it and INH or rifampicin in killing mycobacteria growing within macrophages. M. tuberculosis is much more sensitive to CPZ when grown intracellularly than when grown extracellularly.(8,9)

Thioridazine, a phenothiazine with general properties similar to those of CPZ, and methdilazine (a phenothiazine that is a sedating antihistamine) are also effective against M. tuberculosis.(10,11) Further, since the phenothiazines are concentrated approximately 100-fold by macrophages, the concentration required in tissue fluid for intracellular action against these mycobacteria is about the same (0.5mg/l) as that needed in the treatment of psychosis.(9) This is an important consideration.

From what was stated in the previous article, the synergy demonstrated between CPZ and antibiotics could be attributed to an increased CPZ-induced bacterial permeability as a result of the cell wall changes induced by this drug,(12) which enables higher intracellular concentrations of antibiotic to be attained. A number of related issues have to be considered in this regard:

It has also been proposed that CPZ could affect bacterial efflux pumps.(7) Further studies are needed to substantiate this claim.

Other drugs affecting bacterial permeability
Cationic-type drugs may influence the susceptibility of Burkholderia cepacia to antibiotics.(16) Theophylline and theobromine (both bronchodilators), famotidine (a H(2)-receptor antagonist), diphenhydramine (an antihistamine) and the LAs lidocaine and dibucaine greatly reduced the minimum inhibitory concentrations (MICs) of several aminoglycoside and beta-lactam antibiotics, possibly by modifying the outer membrane of this organism.

Selective serotonin reuptake inhibitors
Sartraline enhances the activity of the 4-fluoroquinolone ciprofloxacin against strains of Corynebacterium urealyticum.(17) Although no evidence was provided, it was considered that sartraline inhibited an energy-dependent efflux pump similar to that in chloroquine-resistant Plasmodium falciparum.(18) It had earlier been shown that fluoxetine hydrochloride enhanced the in-vitro sensitivity of this organism to chloroquine by inhibiting a chloroquine efflux pump.(19)

Proton pump inhibitors (PPIs)
PPIs inhibit gastric acid by blocking the proton pump of the gastric parietal wall. Omeprazole and lansoprazole can potentiate the activity of metronidazole on Helicobacter pylori, possibly by interfering with efflux mechanisms.(20,21)

Other drugs acting as efflux inhibitors
Fluoroquinolone-resistant mutants of Streptococcus pneumoniae are capable of effluxing a range of cationic antibacterial agents, including acridines, ethidium bromide and quaternary ammonium compounds.(22) Reserpine, a centrally acting antihypertensive drug no longer used in the UK, reduces the MIC of norfloxacin (and of these biocides) in these mutants to the level found in the parent strain.(22) Reserpine is thus acting as an efflux pump inhibitor in this organism, although the possibility of other effects has not been studied.

Listeria monocytogenes, a facultatively pathogenic organism responsible for food-borne infections, is susceptible to a wide range of antibiotics, although some instances of plasmid-mediated resistance have been recorded.(23) However, L. monocytogenes present intracellularly in host cells that export antibiotics, thereby expressing a form of multidrug resistance (MDR), and are protected from the action of erythromycin. The cardiovascular drug verapamil (an efflux pump inhibitor), which does not itself possess antibacterial activity, restores the activity of macrolide antibiotics.(23)

Conclusion
Many PADs other than antibiotics have potent ­anti-microbial properties. Unfortunately, this property generally occurs at concentrations associated with their normal purposes. These “toxic effects” (from the antimicrobial point of view) act against their use as primary chemotherapeutic agents. Some PADs enhance the activity of antibiotics against drug-resistant bacteria either by increasing bacterial permeability or by reducing drug efflux. Thioridazine may have a future role to play in the treatment of MDRTB.

The mechanisms of antimicrobial action of PADs are poorly understood and worthy of future attention. Little is known as to whether bacteria can develop stable resistance to PADs or whether PADs can select for antibiotic-resistant bacteria.

Mepacrine and CPZ may have a role to play in the treatment of vCJD (variant Creutzfeldt–Jakob disease), although the initial euphoria might have been misplaced.

The way ahead?
PADs per se cannot be used as chemotherapeutic agents. It is, however, worth considering further the antibiotic- enhancing effects and whether chemical derivatives can be produced that retain/enhance antimicrobial activity at lower dosage and with a reduction in side-effects.