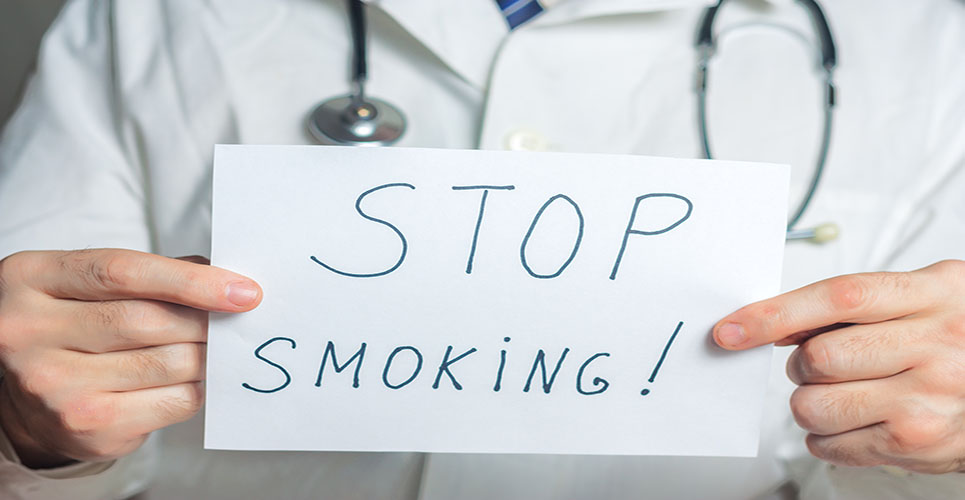 Promoting smoking cessation in the hospital

Treating tobacco dependence is the most ­important strategy to control smoking-related disease, and nicotine replacement therapy (NRT) is the best evaluated treatment option with an excellent safety profile. A variety of products are available. The future will see a much wider use of these compounds to promote tobacco abstinence, reduction/ controlled smoking and to aid temporary withdrawal/craving management.(2)

Primary prevention is the most desirable goal to control tobacco-related diseases. However, to date this has not been very effective; moreover, it would take 30–40 years for primary prevention to translate into major health benefits. Therefore the focus must be directed towards diagnosis and treatment of tobacco dependence.(1)

NRT has been shown to double successful smoking cessation rates, and evidence-based guidelines for the treatment of tobacco addiction have recommended routine use of NRT, particularly in heavily dependent smokers. Success rates of up to 40% can be achieved in specialist clinics.(2)

Despite early concerns regarding the safety of NRT in smokers with heart disease, it is now clear that the health risks far outweigh any treatment-related risks.(2) There is a bulk of scientific literature on the clinical use of NRT and its public health aspects.(3)

There are several  issues that need to be discussed regarding the use of NRT in the hospital setting. Diagnosis and treatment of tobacco dependence are a top priority in the hospital environment.

There are at least five aims in the diagnosis and treatment of tobacco dependence:

In a recent overview on the existing scientific evidence it was stated that: “Efficacious inpatient smoking programs have been developed and validated. The challenge now is to translate these interventions more widely into practice, given changing hospitalization patterns.”(4) Given the ban on smoking in hospitals, hospitalisation imposes a forced abstinence from smoking.

Target groups for diagnostic and treatment services are not just patients, but also the hospital staff members.

Pharmacotherapy
When it comes to pharmaceutical intervention, NRT is the best documented approach. NRT doubles successful smoking cessation rates and evidence-based guidelines for the treatment of tobacco addiction recommended routine use of NRT, particularly in ­heavily dependent smokers.(3)

Five nicotine replacement preparations are currently available: gum, patch, nasal spray, oral inhaler and sub-lingual tablet. As far as safety issues are concerned, scientific evidence shows that the use of NRT involves almost no risk for consumers and patients, especially when compared with the consumption of tobacco products. New concepts developed by our group are the following:

One may also speculate whether NRT will, at some stage, replace cigarettes as the major source of nicotine for people who need this psychoactive drug.(3)

Reduced smoking (which leads to a reduced intake of toxic substances) may be indicated in individuals who:

Studies have shown that nicotine replacement medications may be an untapped source in efforts to reduce smoking.(1)

The diagnostic procedures that are necessary to improve treatment outcomes are established. The ­minimum requirement consists of measuring carbon monoxide in the exhaled air and performing the Fagerström Test for Nicotine Dependence.(7)

Conclusion
Diagnosis and treatment of tobacco dependence needs to be integrated into the medical services in general and in the hospital in particular.

The best evaluated and documented drugs are those of the nicotine replacement category. They are safe and available in several different forms, which differ with regard to pharmacokinetics. Products can be selected according to patient preference, which plays a major role in the abstinence developing process.

The future of NRT will see new developments, including long-term treatment, high-dose treatment, and combination therapy with drugs such as bupropion.

The endpoints of NRT use are complete abstinence, controlled smoking (harm reduction) and temporary abstinence.

Read the latest issue >
Be in the know
Subscribe to Hospital Pharmacy Europe newsletter and magazine
Subscribe
Share this story:
RELATED ARTICLES
Non-invasive treatment now approved for bladder pain syndrome
Humira achieves remission in Crohn’s patients, says study
Republic of Ireland switches to extended half-life therapies for haemophilia A and B
Drugs found to cause deterioration
Inhibitors in haemophilia: treatment options and developments