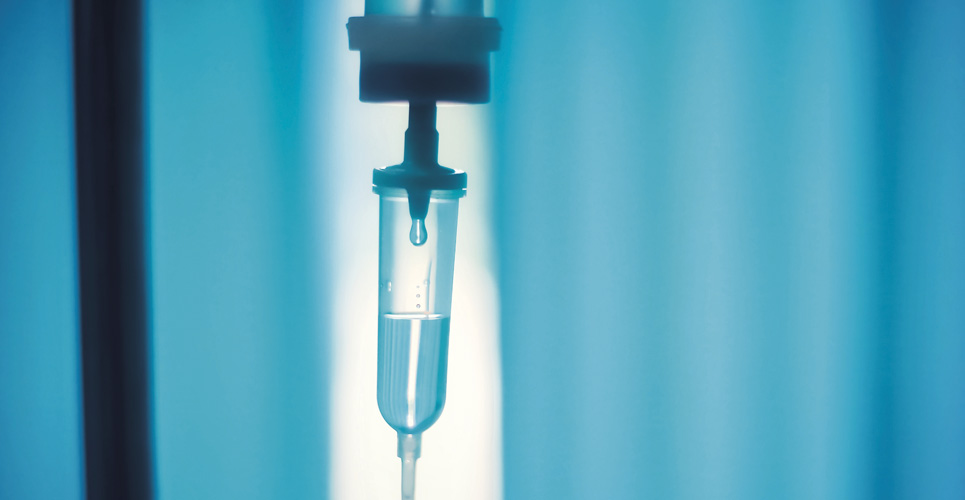 Elastomeric pumps are frequently used for ambulatory chemotherapy treatments within day-care units and patients’ homes. There is a real risk of chemical contamination on disconnection of the perfusion system. This report describes a study comparing the level of direct cytotoxic contamination on wipes, nurses’ gloves, and tissue ‘models’ of patients’ arms following the disconnection of elastomeric pumps filled with a widely-used cytotoxic agent (5-FU). Results are presented for trials conducted both with and without the use of a closed system transfer device: Qimono© by Vygon.

Many studies have shown that healthcare professionals can be exposed to harmful chemicals during the course of their work. In the case of chemotherapy agents, this exposure runs the risk of significant and serious health effects. These can include cardiac toxicity,1 kidney damage,2 negative reproductive outcomes including infertility,3,4 and cancer.5

The potential risks associated with the administration of cytotoxic drugs have been widely assessed. One report details a study of 170 healthcare personnel in 12 French hospitals. From a total of 1703 urinary samples taken from staff within both day-care units and pharmacy departments, 53% of the healthcare workers sampled were found to have at least one positive urinary sample evidencing contamination by cytotoxic drugs.6 In another study of 103 healthcare professionals in six Canadian hospitals, 55% of 201 urinary samples showed evidence of contamination.7

Studies have also shown higher levels of contamination in day-care nurses as opposed to pharmacy staff. One such report describes a study of 156 surface samplings across 13 hospitals. A total of 78% of samples were positive in day-care units compared to only 66% in pharmacy departments.8 Another study of 250 healthcare professionals in 72 pharmacy departments and 170 day-care units reported that 44% of pharmacy staff were exposed to contamination, compared with 50–58% of day-care staff.6 This differential may be due to greater levels of protection for healthcare workers within pharmacy units, such as isolators, laminar flow hoods, and adapted ventilation. In comparison, health workers in the day-care unit environment are particularly vulnerable to contamination by cytotoxic drugs.

In addition to the direct effects on the health of key workers, such exposure can also impact the efficiency of a healthcare provider, resulting in the potential for time lost through absence and replacement of healthcare workers, cancellation or delay of patient treatments, departmental disorganisation and loss in productivity. Minimising the incidence of contamination is critical to patients, staff, and hospital managers.

Numerous recommendations and guidelines for cytotoxic drug administration highlight the importance of CSTDs in the prevention of contamination:

Furthermore in January 2019, Directive (EU) 2019/130 of the European Parliament on the protection of workers from the risks related to exposure to carcinogens or mutagens at work was released and mentions that measures to prevent or reduce risk of exposure should include the use of closed systems.16

All handlings were performed by an experienced and confirmed nurse in compliance with ‘standard good practices’.

The drug is used frequently in ambulatory chemotherapy treatments. These can be carried out both in day-care units and in the homes of patients. Chemotherapy nurses and patients may be at greater risk of contamination during treatments outside of the clinical environment. It is vital that disconnection procedures following treatment are optimal in terms of minimising the possibility of contamination during the process.

Three different combinations of perfusion set up were involved in the study:

Detection and analysis for 5-FU were performed on samples collected by a standardised protocol from wipes, nurse’s gloves, and tissue modelling the arm of the patient. This allowed a measure to be made of direct contamination by 5-FU during disconnection of the perfusion system (samplings, analysis and controls were performed by Dr Paul Sessink, Exposure Control, Sweden).

High-performance liquid chromatography–mass spectrometry (HPLC-MS) was used to detect the presence of 5-FU (limit of detection: 0.1µg). HPLC-MS is a technique used for the analysis of organic compounds. A mixture in the liquid phase is chromatographically separated into its components. A qualitative analysis of components separated by HPLC is achieved by individually subjecting them to MS as they are transferred via an interface from the chromatography column. Quantitative analysis of the individual components is determined using their peak intensities within the chromatogram. This provides reliable identification with high specificity and sensitivity. As a positive control, drops of 5-FU were placed on the wipes, gloves, and tissue representing the patient’s arm.

Statistical analysis was performed to compare the three groups (Kruskal–Wallis H test) or to compare pairs of groups (Mann–Whitney U test). The confidence level was 95%, with statistical significance defined at p < 0.05. The results for total contamination (wipes + nurse’s gloves + patient’s arm) are shown in Table 1.

A total of ten trials were completed for each type of disconnection. Over the course of the study, detectable total contamination with 5-FU was apparent within every disconnection sample (range: 10–851µg). Median total contamination was highest for Group 1 (158µg) and lowest for Group 3 (95µg). The Kruskal–Wallis H test showed there was a statistically significant difference in overall contamination between the three groups (p = 0.010). Further analysis using the Mann–Whitney U test showed that contamination following disconnection of the Qimomale© and Qimofemale© system (Group 3) was significantly less than for either of the two systems that did not incorporate a CSTD (Group 1 and Group 3, p = 0.018; Group 2 and Group 3, p = 0.036).

Review of recent scientific literature shows that approximately 50% of nurses are contaminated during administration of cytotoxic drugs.
USP800, NIOSH, EU Directive and many countries’ Standards of Good Practices, recommend the use of closed systems to prevent and reduce occupational exposure of healthcare workers.

This provides further evidence of the importance of using a closed system transfer device to minimise the risk of contamination during such procedures.

Both USP 800 (enforceable in the US on 1 December 2019) and the recent update of EU Directive on workers’ protection against the risks of exposure (to be transposed within two years to EU countries) prefigures a strong and sustainable trend to foster global use of CSTDs to reduce HCP contamination.

Be in the know
Subscribe to Hospital Pharmacy Europe newsletter and magazine
Subscribe
Share this story:
RELATED ARTICLES
Current approaches in atopic dermatitis therapy
A brighter future for clinical pharmacy
Ready-to-use gemcitabine
Exposure risks with cytotoxic drugs
The pharmacist as part of a chronic pain team