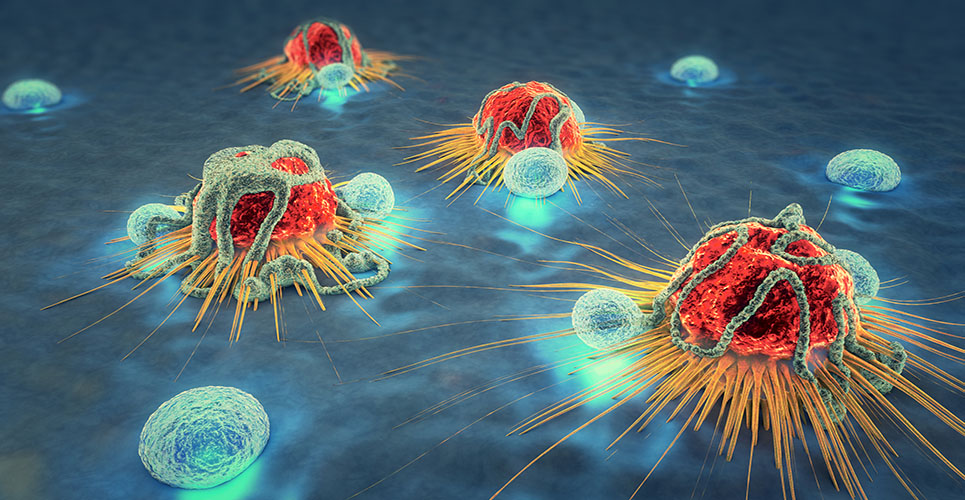 The place of vinca alkaloids in current oncology

Vinca alkaloids (VA) are natural or semisynthetic drugs derived from the periwinkle plant Catharanthus roseus (Vinca rosea Linn); the most important are vincristine (VCR), vinblastine (VBL), vindesine (VDS) and vinorelbine (VRB). The early medicinal uses of this plant led to the screening of these compounds for their hypoglycaemic activity, which was of little importance  compared with their cytotoxic effects.

Chemistry and mechanism of action
They are considered to be dimeric compounds in which indole and dihydroindole nuclei are joined together with other complex ring systems.(1) Modifications have been made to both the velbanamine (catharanthine) and vindoline moieties. VCR and VBL differ only in the presence of a formyl or methyl group, respectively, in the vindoline moiety.

After exposure of cells and tissues to the VAs we can observe: disruption of microtubules, inhibition of synthesis of proteins and nucleic acids, elevation of oxidised glutathione, alteration of lipid metabolism and the lipid content of membranes, elevation of cAMP, and inhibition of calcium–calmodulin regulated cAMP phosphodiesterase. The well-documented direct action is disruption of microtubules resulting from their reversible binding to tubulin, the subunit protein of microtubules, causing dissolution of mitotic spindles and metaphase arrest in dividing cells and many other microtubule-dependent processes, which could impair essential functions, both in dividing and nondividing cells.

VAs bind to sites on tubulin that are distinct from the binding sites of the taxanes, colchicine, podophyllotoxins and GTP. Binding is rapid and readily reversible. VAs are rapidly taken up into cells and then accumulate intracellularly, with intracellular–extracellular concentration ratios as high as 5- to 500-fold, depending on the cell type. Overall, the most important determinant of the rates of drug accumulation and retention is lipophilicity.

Resistance
In-vitro resistance to VAs is due to their decreased accumulation and retention.(1) The altered cellular pharmacology is mediated by the action of a protein, termed P-glycoprotein (Pgp or P170), which is expressed in the plasma membranes of the drug-resistant tumour cells. Pgp, encoded by the mdr1 (multidrug resistance) gene, binds the VAs and extrudes them from the tumour cells through a process requiring energy.

The MDR phenotype confers varying degrees of cross-resistance to other structurally bulky natural products, such as taxanes, anthracyclines, epipodophyllotoxins and colchicine. Calcium channel blockers and calmomodulin inhibitors compete with VAs for binding to Pgp. As consequence of this competition, efflux of VAs from the resistant tumour cells is blocked and their levels in the cell rise to levels that are apparently cytotoxic. Clinical studies of resistance modulation has been confounded by the fact that MDR modulators also enhance drug uptake in normal cells, decrease biliary elimination and drug clearance, and lead to enhanced toxicity.

Overall, strategies aimed at reversing resistance to the VAs in the clinic with pharmacological modulators of MDR have been disappointing. In cell culture systems, cross-resistance between VAs is common, although not absolute, and dose and intensity of therapy may determine the response rate in VA-resistant disease. Structural and functional alterations in alpha- and beta-tubulins, resulting from either genetic mutations or post-translational modifications, have also been identified in tumour cells with acquired resistance to the VAs.

Pharmacology
The pharmacokinetic parameters of VAs are reported in Table 1. When administered by IV bolus injection, the normal route of administration, the VAs exhibit triphasic serum decay patterns in humans.(2,3) Excretion of VAs is primarily by the hepatobiliary route; cancer patients with impaired liver function exhibit reduced clearance of VCR, resulting in higher steady-state concentrations of drug and prolongation of the terminal elimination phase. The cytochrome P450 CYP3A appears to be principally involved in the VA biotransformation. The continuous intravenous administration of VA generally results in steady-state concentrations of drug that are higher than those achieved after IV bolus injection. The VRB has been studied as an oral drug; powdered- and liquid-filled gelatine capsules have shown that bioavailability of the parent compound is 43% for the powder-filled and 27% for the liquid-filled capsules. Plasma concentrations peak within one to two hours after oral treatment, and interindividual variability is moderate.

In vivo a transient methotrexate accumulation in tumour cells is enhanced by the presence of VCR or VBL, an effect mediated by a VA-induced blockade of drug efflux. L-asparaginase may reduce the hepatic clearance of the VA, particularly VCR; to minimise the possibility of this interaction, VCR should be given 12–24 hours before L-asparaginase. We have shown that VRB is pharmacokinetically affected by sequential administration with docetaxel.(4) Indeed, C(max) and AUC were significantly higher and clearance was lower when docetaxel immediately followed VRB administration. It’s possible that polysorbate 80, present in the docetaxel formulation, may interfere with P-glycoprotein, producing a higher VRB concentration and thus a corresponding increase in plasma level.

Toxicity
The toxicities of VA are related to the drug, route of administration and dose. The dose-limiting toxicity of VCR is neurological, characterised by a peripheral, symmetric mixed sensory motor and autonomic polyneuropathy, especially occurring at higher doses. Similar neurotoxicity is also seen with VBL but, at the dosage used clinically, to a much lesser extent since the dose-limiting toxicity is myelosuppression. Initially, only symmetric sensory impairment and paraesthesias in a length-dependent manner (distal extremities first) usually are encountered. Neuritic pain and loss of deep tendon reflexes may develop with continued treatment, which may be followed by foot drop, wrist drop, motor dysfunction, ataxia and paralysis. Acute, severe autonomic neurotoxicity (constipation, abdominal cramps, paralytic ileus, urinary retention, orthostatic hypotension, hypertension) is uncommon. Glutamic acid seems to decrease neurotoxicity, and the adrenocorticotropic hormone analogue ORG 2766 is a protective drug.

Extravasation may cause irritation; treatment should be discontinued, and aspiration of any residual drug remaining in the tissue should be attempted. Local injection of hyaluronidase (150mg subcutaneously in a circumferential manner around the needle site) and moderate heat to the area of leakage help dispersion of drug and may minimise discomfort and the possibility of cellulitis. For all VAs, dose reduction should be considered in patients with impaired liver function. Toxicities, particularly neurotoxicity and myelosuppresion, are increased when VAs are administered by continuous IV infusion. Phlebitis may also occur. Mild and reversible alopecia occurs in approximately 10% and 20% of patients treated with VRB and VCR, respectively.

Dose and clinical use
VCR standard doses are shown in Table 2; in adult a restriction of the absolute dose to 2.0mg/m(2) is commonly used. Doses of 0.25–0.50mg/m(2)/day as continuous IV infusion for five days following a 0.5mg/m(2) bolus dose have generally been well tolerated. Standard guidelines stipulate a 50% reduction in dose for serum total bilirubin between 1.5 and 3.0mg/dl and a 75% reduction for a serum total bilirubin that is greater than 3.0mg/dl.

The common starting dose of VBL is shown in Table 2; a recommended dose escalation of 1.8 and 1.25mg/m(2)/wk is indicated in adults and children, respectively, until a maximum of 18.5mg/m(2)/wk and 12.5mg/m(2)/wk. In combinations such as ABVD (adriamycin plus bleomycin plus vinblastine plus dacarbazine) or the MOPP–ABV “hybrid” (mechlorethamine plus vincristine plus procarbazine plus prednisone/adriamycin plus bleomycin plus vinblastine) the individual VBL doses are 6mg/m(2). As continuous infusion doses of 1.5–2.0mg/m(2) per day for five days have been used. In cases of liver dysfunction the reduction rules are the same as for VCR.

VDS doses are shown in Table 2; in cases of liver dysfunction, dose reduction is recommended.

Intermittent or continuous infusion with VDS doses of 1–2mg/m(2)/day for one to two days, or approximately 1.2mg/m(2) daily for five days every three to four weeks, achieve similar effects. Dose reduction is recommended in cases of severe liver dysfunction.

VRB standard dosage is shown in Table 2; leukopenia and neutropenia have been the most significant side-effects, the latter being observed in 42% of cycles. However, neutropenia was not cumulative and was of short duration. It appears that the more rapid infusions are associated with less local venous toxicity. VRB retained both toxicity and activity when given orally. The maximum tolerated dose of oral VRB was 80–100mg/m(2).

VAs have been incorporated into combination chemotherapy protocols, based not only on their lack of cross-resistance with drugs that alkylate DNA but also on their different mechanism of action. VCR is approved as a component of combination chemotherapy for use in acute lymphocytic leukaemia, lymphoid blast crisis of chronic myeloid leukaemia, Hodgkin’s and non-Hodgkin’s lymphomas, Ewing’s sarcoma, rhabdomyosarcoma of childhood, neuroblastoma, Wilms’ tumour, multiple myeloma and small-cell lung cancer.

VBL has a similar spectrum of activity for Hodgkin’s and non-Hodgkin’s lymphomas and has been used in advanced mycosis fungoides, advanced carcinoma of the testes, Kaposi’s sarcoma and hystiocytosis X.

VDS in haematological malignancies has shown the lack of complete cross-resistance with VCR, although this is less apparent in therapy of solid tumours. VDS has also shown activity against resistant haematologic malignancies, breast carcinoma, malignant melanoma, oesophageal and lung cancer. VRB has shown considerable activity in many tumours (Table 3).

Conclusion
VAs remain important drugs in clinical oncology. VRB has a wide diffusion in many protocols used in solid tumours. VRB pharmacokinetic data can be useful to design effective and less toxic schedules.