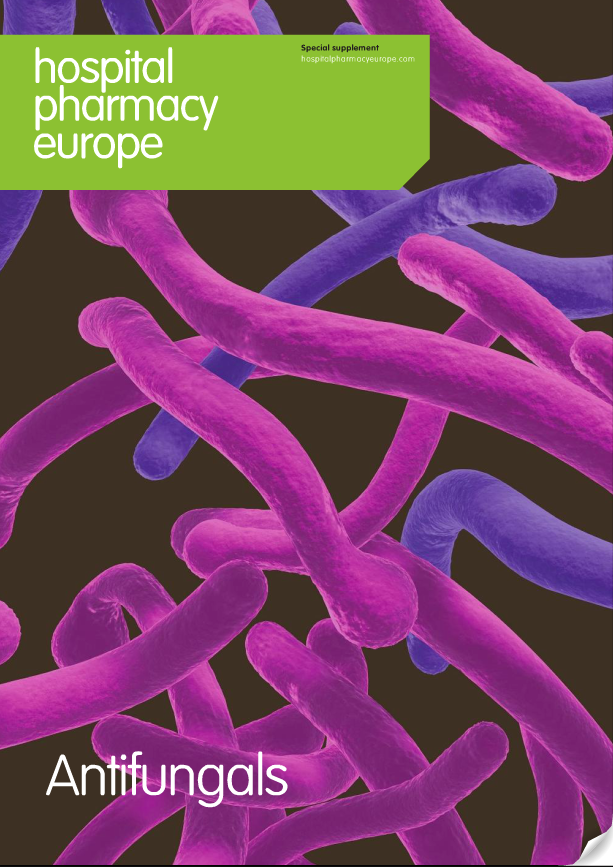 Fungal infections are an important cause of morbidity and mortality among hospitalised patients, with Candida spp and Aspergillus spp being the most common aetiological agents.(1–4) New pathogens are also emerging as a cause of opportunistic infections that may be life-threatening due to their virulence in immunocompromised patients and their frequent resistance to currently available antifungal agents.(5) The main patient groups with the highest incidence of fungal infections are allogeneic bone marrow transplant recipients (15%), lung transplant recipients (20%) and AIDS patients (20–30%).(6)

In the past, severe and prolonged neutropenia was the major risk factor for invasive fungal infections, but T-lymphocyte function impairment (due to prolonged treatment with cyclosporine, tacrolimus or steroids, graft-versus-host disease [GVHD], T-depleted haematopoietic stem cell transplantation or HIV) accounts for the occurrence of these infections in non-neutropenic patients. Fungal infections are diagnosed on the basis of culture (blood, mucosa or skin swab) and histology, but, in cases of deep-seated mycosis, their diagnosis is often delayed as a result of invasive biopsies or surgical excisions of infected lesions, or due to the low fungaemia ratio of some moulds (eg, Aspergillus spp).

During the last decade, however, some improvements have been achieved in the diagnosis of deep-seated mycosis. In neutropenic patients with fever refractory to broad-spectrum antibiotic treatment, the systematic use of computed tomography has enabled an earlier diagnosis of invasive pulmonary mycosis.(7) Galactomannan antigen detection in the serum has shown a good diagnostic value, particularly when there is an increase in the titre on two consecutive serum samples.(8) PCR detection of fungal DNA in blood samples is a non-invasive and repeatable test that may be more sensitive than antigen testing and could suggest when to start antifungal therapy (pre-emptive therapy) and what type of antifungal drug to use.(9)

Since its introduction in 1959, amphotericin B has represented the gold standard for the treatment of systemic fungal infections, due to its broad spectrum of activity.(10) Amphotericin B is a polyene that binds to ergosterol components of the fungal cell membrane, altering the permeability control mechanism. Its toxic effects (nephrotoxicity, hepatotoxicity and infusion-related adverse effects, such as fever, chills and rash) are due to interactions with the cholesterol of human cell membranes and are the main factor limiting administration of full therapeutic doses, especially in the severely ill.(11,12) Moreover, primary or secondary resistance has been documented for Candida lusitaniae and Pseudallescheria, and amphotericin B is known to have a limited effect on Mucormycosis and Sporothrix.

Flucytosine is an analogue of the antineoplastic drug 5-fluorouracil that inhibits the protein synthesis of most Candida spp and Cryptococcus neoformans, but its clinical use has been limited by the frequent onset of resistance (especially when used alone) and suppression of haematopoiesis.

In the past few years, the therapeutic armamentarium for antifungal therapy has been enriched by the introduction of azoles and lipid formulations of amphotericin B and, more recently, a new class of drugs called echinocandins.

Azole-based compounds
Azole-based compounds target the biosynthesis of ergosterol, an essential fungal cell component. Azoles inhibit the enzyme lanosterol demethylase along the pathway to ergosterol. The first azole-based compounds developed, imidazoles miconazole and ketoconazole, are currently not indicated for the treatment of systemic fungal infections due to their limited spectrum and toxicity (they inhibit adrenal androgen synthesis). The introduction of newer azoles, the triazoles fluconazole, itraconazole and voriconazole, provided clinicians with more effective compounds with a better safety profile. Although its spectrum of activity is limited to Candida albicans, Cryptococcus, Trichosporium, Malassezia and other dermatophytes, fluconazole proved effective in preventing fungal infections in patients undergoing haematopoietic stem cell transplantation,(13,14) in the treatment of oropharyngeal candidiasis in HIV patients(15) and of candida infections in patients with and without neutropenia,(16) and in the empirical treatment of febrile neutropenia in low-risk patients.(17) Its use has been associated with a shift from albicans to nonalbicans species, or from susceptible to less susceptible or even resistant strains, especially in patients with long-standing neutropenia or HIV.(18)

Itraconazole was the first broad-spectrum triazole to be effective against C albicans and nonalbicans, as well as moulds, which proved useful in the prophylaxis against candida infections in neutropenic patients(19,20) and in the treatment of aspergillosis.(21) However, the lack of an intravenous formulation (at least in Europe), the poor palatability of the oral suspension and the erratic absorption in patients with mucositis have so far limited its broader use.

Voriconazole, the latest available triazole, can be found as intravenous and oral formulations, with an in-vitro activity against moulds and yeasts comparable to or better than that of amphotericin B, fluconazole and itraconazole.(22) Moreover, the fact that the drug crosses the blood–brain barrier and reaches therapeutic concentrations in the cerebrospinal liquor makes it suitable for the treatment of cerebral mycosis. In a recent randomised study, voriconazole was superior to amphotericin in the treatment of invasive aspergillosis, with a superior survival rate (70.8% vs 57.9%) and a higher favourable response (52.8% vs 31.6%) after 12 weeks of treatment.(23) Moreover, in an open study on acute invasive aspergillosis, in which voriconazole was used as first-line treatment in 52% of patients and as rescue treatment in the remaining 48% of patients, a favourable response to voriconazole was obtained in 48%.

Voriconazole proved as effective as fluconazole in the treatment of oesophageal candidiasis in HIV patients(25) and in the treatment of less common invasive infections by Scedosporium spp and Fusarium spp.(26) Like all triazoles, voriconazole is metabolised by the cytochrome P450 pathway and may alter hepatic function or interfere with the excretion of other drugs (eg, rifampicin, phenytoin, carbamazepine, phenobarbital, cyclosporine, tacrolimus and digoxin). It may also raise the intracellular levels of cytotoxic drugs such as vincristine and anthracyclines, increasing their haematological and gastrointestinal toxic effects.

Other toxic effects that are specific to voriconazole are visual chromatic disturbance and blurred vision, which are reversible if the treatment is stopped. Thus, the current indications for voriconazole are to treat primary or refractory aspergillosis, fluconazole-resistant invasive candidiasis/ candidaemia and Scedosporium and Fusarium infections.

Lipid-based formulations
To overcome the significant toxicity of amphotericin B, a lipid-based technology for its delivery was developed in the 1980s, leading to three different lipid formulations: liposomal amphotericin B (Ambisome), amphotericin B lipid complex (Abelcet) and amphotericin B colloidal dispersion (Amphotec). Although the initial licensing of these lipid formulations was based on data from an open-label, non-comparative study, sufficient data have now been collected on the efficacy and safety of these compounds as a primary treatment for invasive fungal infections. Ten randomised, prospective studies (six of them blinded) were performed from 1997 to 2002, six for the treatment of a confirmed infection (aspergillosis, cryptococcosis or histoplasmosis) and four for the treatment of fever and neutropenia, recruiting a total of 2,285 patients.

Six of these trials compared Ambisome with conventional amphotericin B, one compared Ambisome with Abelcet and one evaluated two different doses of Ambisome.(27) A recent meta-analysis of these studies showed that lipid-based formulations significantly reduced the all-cause mortality risk by 28%, compared with conventional amphotericin B. No significant difference was found in terms of clinical efficacy, while the risk of nephrotoxicity (assumed in the case of a twofold rise in serum creatinine) decreased by 58%. The overall number- needed-to-treat (NNT) to prevent one death was 31, and the NNT to prevent serum creatinine from doubling was 6.(28). Taken together, these data show that the lipid-based formulations of amphotericin B are cost-effective, especially in patients at high risk of nephrotoxicity, such as patients taking cyclosporine, the severely ill in intensive care and patients needing a daily dose of amphotericin B >30mg.(29)

Echinocandins
Caspofungin is the first molecule of the echinocandin family to be approved in the USA and Europe for the treatment of mucosal and deep-seated fungal infections. The mechanism of action of this novel class of antifungal compounds is a noncompetitive inhibition of the enzyme (1,3)-beta-glucan synthetase, preventing the production of glucan, the main component of the fungal cell wall, and eventually inducing the death of the microorganism due to lysis and osmotic stress. In-vitro studies have shown that caspofungin is active against Candida spp, Aspergillus spp and other selected filamentous fungi.

Moreover, no antagonism has been observed when caspofungin is combined with azole and polyene drugs.(6,30,31) Recent randomised studies on the treatment of candida-related oesophagitis, candidaemia and neutropenic fever in HIV or haematological patients have demonstrated that the efficacy of caspofungin is similar to that of fluconazole, amphotericin B and Ambisome, and that its safety profile is comparable to that of fluconazole (with the advantage of a broader spectrum against Candida spp), and better than that of amphotericin B and Ambisome”. (32–34) In adult patients who had refractory invasive aspergillosis or were intolerant to other antifungal drugs, caspofungin was globally effective in 45% of cases, and its excellent toxicity profile was confirmed after treatment lasting a median 34.7 days, range 1–162.(30,35) Caspofungin is currently indicated to treat mucosal and invasive candidiasis and refractory aspergillosis in adults. The novel mechanism of action of echinocandins makes the use of caspofungin in combination with other antifungal agents with different mechanisms of action appealing.

The “combination therapy” aims to take advantage of the in-vitro synergy between caspofungin and amphotericin B and triazoles.(36,37) Two retrospective studies have recently been reported on the combination of caspofungin with Ambisome in patients for whom previous monotherapy with liposomal amphotericin B had failed. Overall response rates were 42% and 60%, with nonsignificant or mild toxicity, respectively.(38,39) These encouraging results show that combination therapy is safe, and further randomised trials are needed to assess its efficacy in refractory life-threatening fungal infections.

Conclusion
The increasing incidence of fungal infections has coincided in the last decade with improvements in diagnostic techniques and therapeutic options. The introduction of lipid formulations of amphotericin B has enabled the antifungal treatment to be administered safely, while the recent availability of new broad-spectrum antifungal drugs with a good tolerability profile enables better cure rates for severe fungal infections in immunocompromised patients.
One of the major drawbacks in this new antifungal treatment scenario is the increasing cost to the health system, due to the higher purchase price of these new drugs. Shifting from empirical to pre-emptive use of antifungal medication and ongoing pharmacoeconomical analyses on cost-effectiveness data for all new drugs may help control these costs in the future.