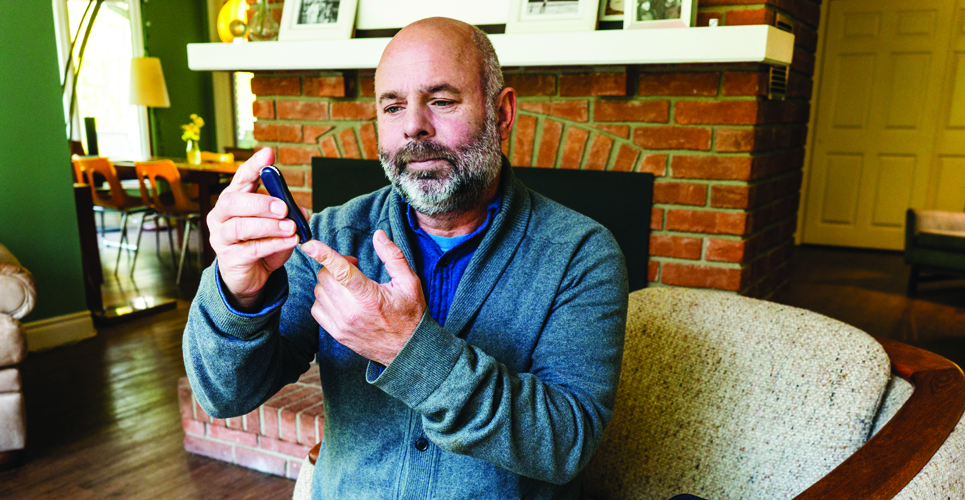 Current prevalence
Although the incidence of type 1 diabetes in children is increasing,(2) most concern is focusing on type 2 diabetes, a condition that becomes more common with economic attainment and sedentary lifestyle, and that accounts for 80–85% of all cases of diabetes.(3) The number of cases in industrialised countries is expected to increase by 42%, and by 170% in industrialising countries, in the next 25 years.(1)

The current prevalence of type 2 diabetes is estimated to range from approximately 1.2% in Africa to 4.7% in Europe and 7.6% in the eastern Mediterranean, Middle East and United States.(3) There is wide variation within these regions: in Europe, for example, estimates for diabetes overall range from approximately 3% for Ireland to nearly 12% for the Czech Republic (see Figure 1).(3)

The true figures may be higher, because underdiagnosis is a significant problem. In the UK, the charity Diabetes UK estimates that approximately 1.4 million people have been diagnosed with diabetes, while a further one million have diabetes but have not been diagnosed.(4) In the United States, approximately one-third of older people with type 2 diabetes may be undiagnosed.(5)

Type 2 diabetes is overwhelmingly more common after the age of 50.(6) In the UK, the prevalence is believed to be substantially greater among some ethnic groups – notably south Asians (up to six times greater) and African- Caribbeans (up to three times greater)(7) – compared with Caucasian populations. However, socioeconomic deprivation increases the risk of type 2 diabetes for the least well off by a factor of 1.6 compared with the most prosperous,(8) and in inner-city populations this may reduce the differences between ethnic groups.(9)

In the UK, the prevalence of diabetes has doubled in the past 20 years.(6) Changes in the age distribution accounted for a 5.2% increase among men and a 1.2 increase among women. A similar increase has been reported among adults in Australia, where it is estimated that 7.4% of adults now have diabetes;(10) however, an additional 16.4% were found to have impaired glucose tolerance or impaired fasting glucose, which probably indicates a prediabetic state.(11,12)

Trends in type 2 diabetes
Type 2 diabetes is becoming more common among all groups, but the condition, until recently termed maturity- onset diabetes, is now increasingly common in the young.

In 1999, epidemiological data revealed the increasing incidence of type 2 diabetes among the young in different ethnic groups in the United States.(13) In 2001, it was estimated that the annual incidence of type 2 diabetes in an ethnically diverse population of under-18s in the UK was 1.52 per 100,000, with a crude prevalence of 0.038 per 1,000.(14) In that report, all the cases were in ethnic groups known to be at increased risk; in 2002, the first cases were reported in UK Caucasian children.(15)

The phenomenon of type 2 diabetes in teenagers is so new that it is uncertain whether they face the same risks of macrovascular and microvascular complications as adults or other young people with type 1 diabetes.

Treatment by lifestyle change
Modern lifestyle is the most likely explanation for these changes. In the European Union, physical inactivity, including leisure time spent sitting down, correlates directly with the risk of obesity.(16) In genetically predisposed individuals, factors that increase the risk of developing type 2 diabetes include obesity and physical inactivity.(17,18) The increase in the prevalence of obesity, particularly among children, has been strongly linked to type 2 diabetes(8,13) (although not all reported cases occur in children who are obese(14)). The mechanism underlying this relationship is believed to be insulin resistance.(19)

Physical exercise can prevent type 2 diabetes in people at increased risk. The most recent of several large trials of lifestyle change, the Finnish Diabetes Prevention Study demonstrated that progression from impaired glucose tolerance to type 2 diabetes in middle-aged, overweight people can be prevented by lifestyle change.(20) After four years, the incidence of type 2 diabetes was 23% among controls but 11% among those given dietary counselling and exercise (relative risk 0.42) (see Figure 2). There was a strong correlation between successfully achieving the intervention targets (reducing fat, sugar and alcohol intake and increasing dietary fibre and exercise) and risk of diabetes: none of the people who achieved four of these five targets developed diabetes.

Diet and exercise now comprise the initial approach to the management of type 2 diabetes. However, the UK Prospective Diabetes Study Group has shown that type 2 diabetes is a progressive condition that can rarely be managed by a single intervention: in a cohort of 4,075 newly diagnosed adults, only 8% continued to meet the target for glycaemic control by diet alone after nine years.(21)

Trends in drug treatment
The PPAR gamma agonists rosiglitazone and pioglitazone were approved by the Committee for Proprietary Medicinal Products in 2000. Their licensed indications are the same: for use in combination with metformin (in obese patients) or a sulphonylurea (when metformin is contraindicated or poorly tolerated), when monotherapy with either agent is unsatisfactory. Metformin remains the treatment of choice for obese patients because it reduces mortality.(22) The glitazones will therefore be prescribed for patients with advanced diabetes and used as an alternative to insulin. This is arguably not their most appropriate role.

The glitazones act by reducing insulin sensitivity, which appears to be a fundamental abnormality in type 2 diabetes(12) and one that links glucose intolerance with obesity, hypertension, hyperlipidaemia and cardiovascular disease in the metabolic syndrome.(23) Insulin resistance(24) and the metabolic syndrome(25) are associated with increased morbidity and mortality in type 2 diabetes. A more logical place for the glitazones is therefore earlier in the course of the disease, when their impact on progression and complications might be greater (in the UK Prospective Diabetes Study, about half of patients had evidence of diabetic complications at the time of diagnosis(26)); however, this role seems unlikely until the safety of these agents is better established in the current indications.

Prevention of disease progression is an increasingly important aim for drug treatment, and multiple drug therapy may become the norm. There is now clear evidence that angiotensin-converting enzyme (ACE) inhibitors reduce the risk of renal and cardiovascular complications. In the HOPE (Heart Outcomes Prevention Evaluation) study, for example, ramipril reduced the risk of combined cardiovascular events by 25% and overt nephropathy by 24% in patients with diabetes at increased cardiovascular risk.(27)

The statins also appear to have additional benefits in people with diabetes. A subgroup analysis of the West of Scotland Coronary Prevention Study found that treatment with pravastatin reduced the risk of developing type 2 diabetes by 30% in normoglycaemic middle-aged men; one possible mechanism of action is a reduction in plasma triglycerides. (28)

The NAVIGATOR trial (Nateglinide And Valsartan in Impaired Glucose Tolerance Outcomes Research) will determine whether treatment with the short-acting hypoglycaemic agent nateglinide, or the angiotensin II receptor antagonist valsartan, or both, will delay the onset of type 2 diabetes and cardio­vascular disease in people with impaired glucose tolerance who are at increased cardiovascular risk.(29) The placebo-controlled study will last approximately six years and will involve 7,500 people in up to 800 centres worldwide.

Implications for healthcare
The cost of diabetes in Europe is enormous, although there is substantial variation in spending between states (see Figure 3).(3) In the UK, expenditure on type 2 diabetes accounts for 4–5% of all NHS resources (about £2 billion, or e. 3.3 billion, annually); direct costs account for 80% of spending, and social services and residential care for the remainder.(30)

Because complications are treated in secondary care, hospitals carry a disproportionate share of costs: in the UK, 10% of all secondary care resources are devoted to diabetes.(7) It is estimated that, for a UK primary care organisation serving a population of 100,000, the cost of providing a diabetes care service for patients with type 2 diabetes is approximately £19,000 per patient annually (excluding drug costs).(30)

These statistics emphasise the importance of implementing the preventive approaches now under evaluation. Public health strategies are a key component of Government proposals to tackle the increase in type 2 diabetes.(6) In Switzerland, for example, it is estimated that a multifactorial programme could save CHF 194 million (€132 million) by reducing complications.(32)

Conclusion
There is now widespread awareness that the incidence of type 2 diabetes is increasing rapidly, due predominantly to adverse lifestyle change. The management of complications accounts for the majority of current spending, for which the secondary care sector carries a disproportionate share.

Strategies to reduce the risk of developing diabetes and the risk of complications are now being evaluated.

Read the latest issue >
Be in the know
Subscribe to Hospital Pharmacy Europe newsletter and magazine
Subscribe
Share this story:
RELATED ARTICLES
Warning over risk of medical abbreviations
Tivicay® for treatment of HIV receives positive CHMP opinion
Everything you need to know about the Falsified Medicines Directive
Heart patients need insulin
Approval of biosimilar medicines