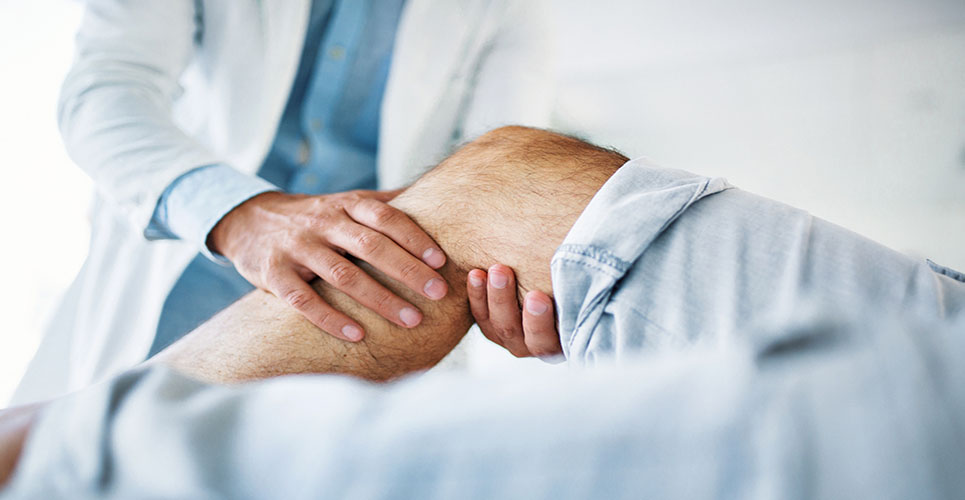 Viscosupplementation for osteoarthritis of the knee

Osteoarthritis (OA) is a major cause of disability. Patients with OA have pain that typically worsens with weight-bearing and activity, and improves with rest. Unlike rheumatoid arthritis (RA), inflammation is usually mild and localised in the affected joint.

Although the aetiology of OA remains unknown, biomechanical stresses and biochemical changes in the articular cartilage, subchondral bone and synovial membrane, and genetic factors, are all important in its pathogenesis. In joints affected by OA, the synovial fluid’s capacity to lubricate and to absorb impact are typically reduced. These changes are partly owing to a reduction in the size and concentration of hyaluronic acid (hyaluronan) molecules naturally present in synovial fluid.

Medical management of OA of the knee is effective for many patients, but significant morbidity is common for those using nonsteroidal anti-inflammatory drugs (NSAIDs). Gastrointestinal toxicity has been a major problem for many patients on NSAIDs, especially for geriatric patients who need to take them for extended periods to treat chronic conditions. Although only a minority of patients using NSAIDs appear to develop serious GI problems, because of widespread usage it is estimated that there are at least 16,500 NSAID-related deaths each year in the USA among patients with OA and RA.(1,2) Another 76,000 are hospitalised. The economic burden of NSAID-associated gastrointestinal disorders is enormous, with an estimated cost of US$500 million.

Surgical treatment of the knee is effective, but it is not appropriate for all stages of the disease or for all patients. It is also costly and not without risks.

With increased understanding of the pathogenesis of OA, new therapies are being developed, one of which is viscosupplementation with hyaluronic acid (HA). In recent years, the concept of viscosupplementation has gained widespread acceptance as a new treatment for the management of OA of the knee.

HA is not well absorbed orally but has been widely used intra-articularly in the treatment of OA in animals and, more recently, in humans. HA is well tolerated with no demonstrable toxicity and few side- effects, and because it is injected directly into the joint its onset of action is rapid. Conversely, its route of administration does limit its therapeutic applications to some degree, and high cost is also a factor.(3)

Role in the body
HA serves as a lubricant and shock-absorber in the synovial fluid, and is also found in the vitreous humor of the eye.

Biochemistry
Glycosaminoglycans (GAGs) are carbohydrate polymers that are among the most abundant components of connective tissue throughout the body. GAG molecules are long, homogeneous, unbranched polysaccharide chains that are formed by repeating disaccharide subunits.

Hyaluronate is the most abundant GAG in synovial fluid, where it is produced and secreted by synoviocytes. Hyaluronate is also produced by chondrocytes in the extracellular matrix of articular cartilage, where it forms the foundation for proteoglycan aggregates.

HA differs from other glycosaminoglycans in that it is unsulfated; also, it does not bind covalently with proteins to form proteoglycan monomers, serving instead as the backbone of proteoglycan aggregates. It is the only GAG that is not limited to animal tissues, being produced by certain bacteria.

HA is composed of a recurring disaccharide subunit of hyaluronate consisting of N-acetylglucosamine and glucuronate. These sugar subunits are joined by glycosidic bonds, which are extremely flexible in solution; therefore hyaluronate has no defined tertiary structure. The carboxylate group on the glucuronate sugar is negatively charged; the recurring electronegative charges along the chain repel one another and attract water molecules. Hence, hyaluronate has been likened to a “molecular sponge”.

These properties account for the viscosity and elasticity of the hyaluronate macromolecule. Table 1 lists some of the characteristics of commercially available and naturally occurring hyaluronates.

Mechanisms of action
The goal of viscosupplementation is to increase the molecular weight and concentration of hyaluronate in arthritic joints so that the intra-articular milieu more closely resembles that of healthy synovial fluid. The mechanism of action by which viscosupplementation alleviates arthritic knee pain is a subject of debate, with several possibilities being proposed.

Biomechanical protection
It has been proposed that exogenous viscoelastic substances act biomechanically by providing a “cushioning” effect. However, some authors have suggested that viscosupplements are eliminated from the knee too rapidly to exert a significant and lasting biomechanical effect. Indeed, the half-life of hyaluronate in sheep is less than 24 hours.

Anti-inflammatory action
HA has both in-vivo and in-vitro effects on leukocyte function. These include inhibition of phagocytosis, adherence and mitogen-induced stimulation. These properties are dependent on the molecular size of hyaluronic acid. Intra-articular administration of hyaluronic acid reduces levels of inflammatory mediators, including prostaglandin and cyclic adenosine monophosphate, in the synovial fluid of patients with arthritis.(5)
Analgesic activity
It seems that intra-articular HA modulates pain perception directly through inhibition of nociceptors or indirectly through binding of substance P – a small peptide involved in the transmission of pain signals.(5)

More research is needed to evaluate whether or not viscosupplementation has disease-altering properties in addition to its apparent palliative characteristics.(5,7)

Other possible mechanisms
HA may provide additional lubrication of the synovial membrane and affect its permeability, thereby controlling effusions. Other possible, though less certain, mechanisms include promotion of cartilage matrix synthesis and reaggregation of proteoglycans.

One manufacturer has cross-linked hyaluronate chains in an effort to further enhance the molecular weight (and hence the viscoelasticity) of its product, hylan G-F 20.

Biosynthetic sodium hyaluronate is not cross-linked but does have a high molecular weight. This high molecular weight provides the product with similar viscoelastic properties to healthy synovial fluid. In addition, high- molecular-weight hyaluronans have been associated with improved lubrication, augmented natural HA production by synovial fibroblasts and suppression of inflammatory mediators. Biosynthetic sodium hyaluronate must be stored within a controlled temperature range of 2–8C. It contains no animal protein and no residual cross-linking reagents.

Clinical effectiveness
A number of recent clinical trials have evaluated the efficacy and safety of intra-articular HA injections.(8–15) Table 2 summarises some of the results. The reports of these studies were among those presented to the Food and Drug Administration (FDA) in the course of the process that resulted in the release of this treatment modality.

The American College of Rheumatology has included viscosupplementation in its treatment algorithm for OA of the knee.(4,16,17)

The price for a course of HA ranges from approximately £200 to £300 in the UK. In our own experience of HA injections, in 104 patients from 1999 to 2002, the average duration of pain relief was seven months, but approximately 10% of patients did not experience any significant pain relief. We did not have any significant complications, and the only reported adverse effects were injection site pain in five patients (lasting less than 24 hours) and exacerbated knee effusion in two patients.

In a presentation at the British Orthopaedic Association (BOA) meeting in Birmingham on 13 September 2001, a group of Orthopaedic Surgeons questioned the effectiveness of arthroscopic lavage and claimed that replacing the surgical procedure with viscosupplementation could confer significant benefits in terms of cost, waiting lists and patient convenience, in a randomised trial.(18)

Safety
The risk of introducing infection into an OA joint is extremely low if standard aseptic technique is used. The lack of systemic side-effects make the use of viscosupplementation an appealing option for the management of knee OA.

Preclinical studies showed that hylan G-F 20 is nonantigenic, nontoxic, noninflammatory and does not elicit foreign body reactions. Hyaluronan, from which hylan is derived, has been safely used in ophthalmic and orthopaedic applications in millions of patients.

Precautions
Patients should consult their doctor or surgeon if they have a history of hypersensitivities to hyaluronan preparations or are allergic to avian proteins, feathers and egg products (this is not an issue with fermentation-derived hyaluronates). Other contraindications include local skin disease or infection, and severe joint inflammation.

Conclusion
The economic costs of OA of the knee are enormous. If viscosupplementation does indeed reduce and defer the need for surgical procedures (eg, arthroscopic knee washouts and debridements and total knee replacements), the cost savings will be considerable. Even more important will be the diminution of the risks associated with anaesthetic and surgical procedures.

However, three- or five-weekly injections are quite awkward for most clinicians, and a hyaluronan product delivered in one single injection, with proven clinical efficacy and sufficient longevity, would be a useful next step. In the UK, the use of viscosupplementation is increasing, but is still low due to lack of funds, the inefficiencies of the National Health Service, and slow general practitioner and surgeon acceptance.(20)

Viscosupplementation represents a valuable addition to current treatments for osteoarthritis.