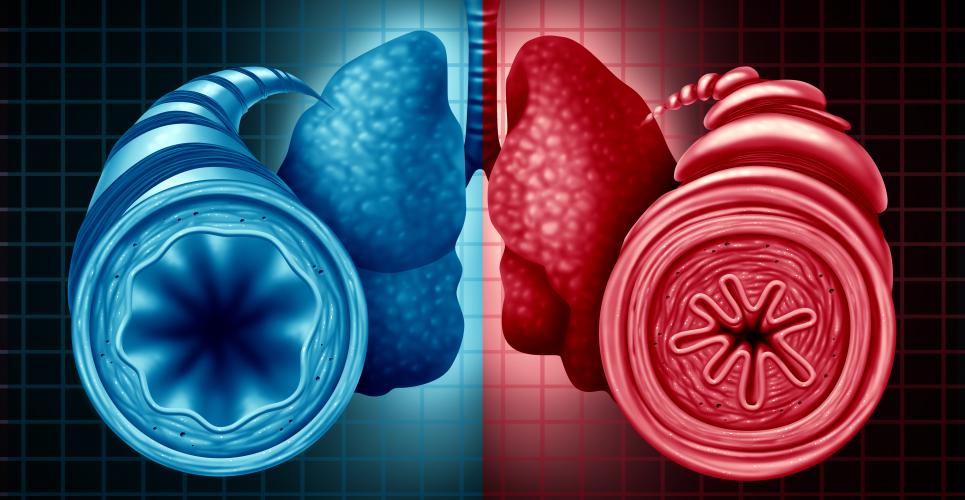 For the first time, researchers have mapped the building blocks of the human lungs and airways, in both asthma patients and those without asthma.
The research from the Wellcome Sanger Institute, University Medical Center Groningen, Open Targets, GSK and collaborators revealed the identity of each cell type, creating the first draft Human Cell Atlas of the lung. They also discovered an entirely new cell state that produces mucus in asthma patients.
The maps reveal the differences between asthmatic and normal airways and identify how cells in the lung communicate with each other. Understanding the cells and their signals could lead to finding new drug targets for treating asthma.
While it is often manageable with medication, asthma can cause ongoing problems and there is the risk of severe, life-threatening asthma attacks. A better understanding of healthy lung cells and the differences with asthmatic lungs is required to develop new effective medications.
To explore cell types within normal lungs and upper airways, researchers used single cell technology to study samples from 17 people. They analysed more than 36,000 individual cells from the nasal area and from three different areas of the lung. This allowed researchers to see exactly which genes were active in each cell and identify the specific cell type.
The researchers then detected the different cell types and activities in lung samples from six asthma patients, comparing them to normal lungs. They discovered there were clear differences between the cells in normal and asthmatic lungs. One symptom of asthma is an overproduction of mucus. However, not all the cells responsible for this were known. The researchers discovered a new mucus-creating cell state – the muco-cilliated state – in asthmatic lungs, that had not been seen before.
Dr Felipe Vieira Braga, a first author on the paper from the Wellcome Sanger Institute and Open Targets, said: “We have generated a detailed anatomical map of the respiratory airways, producing the first draft human lung cell atlas from both normal and asthmatic people. This has given us a better definition of the cell types in asthmatic lungs, and allowed us to discover an entirely new cell state in asthmatic patients that produces mucus.”
The study revealed large differences between normal and asthmatic lungs, in the cells and how they communicated with each other. The asthmatic lungs had many more inflammatory Th2 cells, which sent the vast majority of cellular signals in asthma, compared with a broad range of cell communications in normal lungs.
Dr Martijn Nawijn, a senior author from University Medical Center Groningen, said: “We already knew that inflammatory Th2 cells played a role in asthma, but only now do we see how great that influence is. In normal people, all kinds of cells communicate with each other in order to keep the airways functioning well. But in asthma patients, almost all of those interactions are lost. Instead of a network of interactions, in asthma the inflammatory cells seem to completely dominate the communication in the airways.”
Knowing the types of cells in asthmatic lungs and how they communicate, could help researchers seek new drug targets that could prevent the cells from responding to the inflammatory signals and help restore normal lung function.
The atlases also revealed that location was important for the lung cells. The study showed that cells in different areas of the lung had very different cellular activities. This has further implications for studying drug targets and designing drug trials.
Dr Sarah Teichmann, a senior author from the Wellcome Sanger Institute, University of Cambridge and Open Targets, and co-chair of the Human Cell Atlas Organising Committee, said: “As part of the Human Cell Atlas initiative, we have created the first comprehensive cellular map of the lungs. Our large-scale, open access data reveals the activity of different cells, their communication pathways and locations. The lung cell atlas will provide a great resource for further lung research and we hope that it will enable the identification of potential new therapeutic targets for asthma relief.”

Be in the know
Subscribe to Hospital Pharmacy Europe newsletter and magazine
Subscribe
Share this story:
RELATED ARTICLES
NICE says no to life saving treatment for childhood osteosarcoma
Pixuvri approved for use in Europe
Rethinking pharmacy services
Pharmaceutical care: The present and the future
Call for more research to understand and find treatments for rare diseases