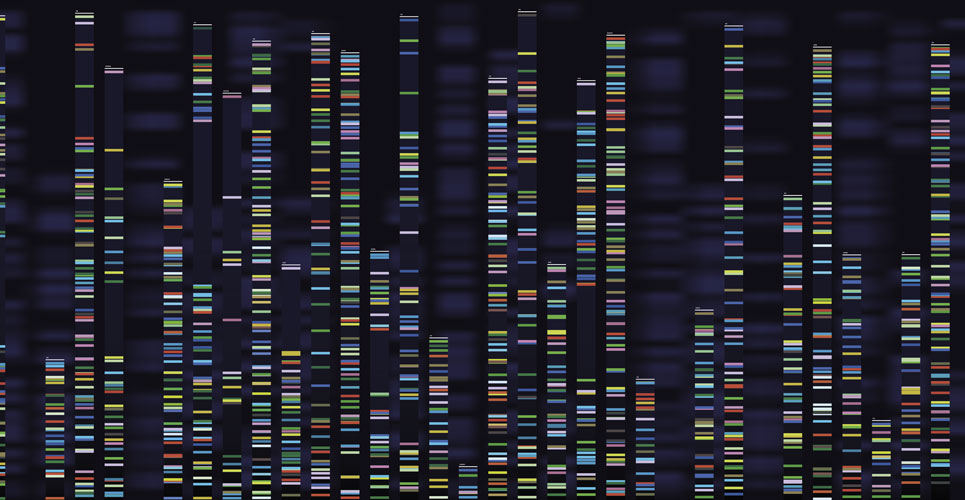 An introduction to pharmacogenomics

Pharmacogenomics (PGx) is a relatively new discipline in healthcare. It integrates knowledge of pharmacology (the science of drugs and clinical response) and genomics (the study of genes and their functions). In other words, pharmacogenomics studies the relationship between genetic variations and the way a patient’s body responds to drugs. By having this genetic understanding and information, there is potential to increase drug efficacies and prevent toxic side effects.

Traditionally, patients are treated in a ‘one size fits it all’ approach based on results of controlled clinical trials. Many drugs are assumed to have equal efficacies in all patients; however, there might be different responses to the same drug because of genetic variations. In the last decade, PGx has been implemented in clinical practice to predict and individualise therapies and improve treatment outcomes.1–3 PGx uses an individual’s genetic factors, such as single nucleotide polymorphisms (SNPs), to personalise therapy or dose selection. SNPs encode transporters, drug-metabolising enzymes and targets that can significantly impact drug efficacy and drug toxicity. A genetic variation can change the protein’s structure and affect the good or bad response to a specific drug.1,3

An overview of polymorphisms is provided by The Pharmacogene Variation (PharmVar) Consortium, which catalogues allelic variations of genes that impact drug metabolism, disposition and response.4

Mechanisms by which genetic alterations can influence drug response

There are four mechanisms by which genetic factors can influence the response to drugs.1 They include effects on:

Drug transporters are involved in the absorption, distribution, and elimination of many drugs and are present in different cells, tissues and organs within the body. These are responsible for the influx and efflux of drugs between various systems. Genetic variations in drug transporters (for example, efflux transporters) can affect the function and the way drugs enter or exit cells, hence increasing or decreasing concentrations of the drug in the body.1

P-glycoprotein (P-gP) is an efflux transporter. The gene that codes for P-gP, ABCB1 (ATP-binding cassette B1), has variant forms. In the intestine, P-gP works to move drugs from intestinal epithelial cells back into the gastrointestinal lumen. A variant would result in a decrease in bioavailability for P-gP substrate drugs. An example is toxicity related to sunitib, a multi-targeted tyrosine kinase inhibitor. Clinical trials have revealed a higher prevalence and severity of different side-effects such as hand–foot syndrome in patients with inherited specific haplotypes of the ABCB1 and ABCB2 efflux transporter genes.1,5

Another example is SLCO1B1 (solute carrier organic anion transporter family member 1B1), a gene encoding the organic anion transporter polypeptide 1 (OATP1B1), a transporter localised in various tissues. A genetic variant, SLCO1B15, has decreased activity and does not transport as much drug into cells/tissues. A patient with this variant would likely have higher drug concentrations in the blood, with the altered pharmacokinetic parameters. This appears to be of relevance in, for example, toxicity following administration of high-dose methotrexate, a folate inhibitor frequently used in a variety of adult and paediatric cancers (such as acute lymphoblastic leukaemia and osteosarcoma).1,6

Cytochrome P450 (CYP) enzymes are the major systems for drug metabolism and can be affected by environmental (for example, drug–drug interactions) or genetic factors.1 Polymorphisms in CYP genes may be responsible for diminished or absent metabolism or excessive metabolism of a drug. There are three metabolic phenotypes: ultra-rapid; extensive (normal); and poor metabolisers.1 The most important genetic variations are seen in CYP2C9, CYP2C19, CYP2D6 and CYP3A4 genes and TMPT and UGT1A.1,4

Genetic polymorphisms have been well-studied in the highly polymorphic CYP2D6 subfamily, which is responsible for the metabolism of drugs including codeine, selective serotonin reuptake inhibitors and nortriptyline.

Poor metabolisers (based upon CYP2D6) may be overdosed with nortryptiline and are at risk of increased effects and side effects at normal dosages. If poor metabolisers use codeine (which is a prodrug and has to be metabolised to its active moiety) it will have no, or decreased, therapeutic benefit.1 By contrast, patients on codeine who are ultra-rapid metabolisers (based upon CYP2D6) may have higher than expected morphine levels with increased side effects and a shorter than expected duration of analgesia.1

Polymorphisms of thiopurine S-methyltransferase (TPMT), an enzyme involved in the metabolism of thiopurines such as azathioprine and 6-mercaptopurines, are common.1 They can result in inactivation or markedly decreased enzyme activity and an increased risk of treatment-related side-effects. Mercaptopurine is often used in the treatment of paediatric acute lymphoblastic leukaemia. When used in children with genetic changes in the TPMT gene resulting in a low enzyme activity, this can cause severe reactions to this drug (for example, myelosuppression, which can be fatal). Dose reductions may be required. In some centres, prospective testing for TMPT variants is available and in some countries, TPMT testing is even mandatory for patients treated according to specific treatment protocols to reduce toxicity of, for example, 6-mercaptopurine without compromising efficacy.1

SNPs in drug receptor genes can result in altered activity of a specific receptor, changing the way it interacts with, or binds to, the target receptor. Also, some genetic variations include altered production (expression) of a given receptor. These variations in genes coding for proteins that are drug targets might lead to inter-individual responses despite the presence of appropriate concentrations of the drug at the target.1

An example are polymorphisms in the gene encoding for vitamin K epoxide reductase complex (VKORC1). Warfarin, an anticoagulant, prevents the vitamin K recycling needed for blood clotting by blocking the protein that controls the recycling (VKORC1). Genetic variations that increase or decrease the VKORC1 amount can affect the dose of warfarin needed to prevent blood clotting. Lower doses may be required for patients producing less reduced vitamin K than patients with normal VKORC1 levels.

Idiosyncratic reactions are drug reactions that occur rarely and unpredictably among the population. The major histocompatibility complex (MHC) is a group of cell surface proteins that bind to foreign molecules in order to be recognised by corresponding T-cells, followed by induction of immune systems.9 In humans, the MHC is also known as human leukocyte antigen (HLA) complex. Some HLA alleles are associated with increased risk for allergic responses to certain drugs.

Certain genetic variations can influence disease pathogenesis, the underlying severity of a disease and response to specific treatments. Cystic fibrosis (CF) is a genetic autosomal recessive disease caused by mutations in the cystic fibrosis transmembrane conductance regulator gene (CFTR), which regulates chloride and water transport in the lungs and digestive tract. In approximately 5% of patients, a G551D mutation is present which interferes with activation of the CFTR chloride channel. This has led to the development of CFTR mutation-specific targeted therapies (ivacaftor) for selected patients with CF.1

Many guidelines providing clinically-useful guidance are made available through international consortia and organisations. Updated information regarding known associations can be found on the following websites.

This consortium aims to implement and support pharmacogenetics for the most important and actionable pharmacogenetic markers into clinical care and monitor uptake and experience (www.eu-pic.net/).
Additional information and guidelines can also be found on the website of the US Food and Drug Administration. The Genomics and Targeted Therapy Group works to develop pharmacogenomics and other biomarkers in drug development and clinical practice. It provides an extensive table of pharmacogenomic biomarkers in drug labelling (www.fda.gov/Drugs/ScienceResearch/ucm572698.htm).

Pharmacists formally trained as drug experts should be open to the implementation of PGx into their (daily) practice. This can be a challenge and requires significant investments for education, including education of patients. In their role, pharmacists could move to the use of drugs from the ‘trial and error phase’ towards more specific and individualised drug therapies for the patient. Knowledge and education in PGx (understanding the nomenclature) are paramount in the ability to make recommendations, and successfully interpret and advise on PGx-driven therapeutic decisions.

PGx testing could eventually become routine practice for pharmacists, so the profession must start to plan for its application in practice now. In addition, the complementary use of PGx and therapeutic drug monitoring could be useful in managing the patient’s drug therapy in relation to a positive outcome.3 Previous work with pharmacist-driven PGx studies, including voriconazole, tacrolimus, opioids, and irinotecan have been carried out.12–14

Today, an increasing number of pharmacists are engaging in PGx routine practice,14 not only in hospital setting but also in the community setting.

The CPIC has developed clinical practice guidelines for over 40 medications to help individualise therapy based on PGx test results, but genetic testing to guide therapy selection in patients with cancer is not commonplace in clinical practice in many countries. The rapid growth of clinically relevant pharmacogenomic knowledge highlights some of the challenges associated with implementation of PGx in clinical practice.15 Possible reasons are a lack of genomic education/training, regulatory and ethical concerns, limited proof of concept and efficacy trials and inadequate reimbursement, and the potential for delay of treatment while awaiting for genotyping results.

Genetic polymorphisms have been identified for many drug-metabolising enzymes and drug targets contributing to inter-patient variability in drug responses. The application of PGx into routine practice offers the potential to transform medical practice but there still are many challenges associated with its implementation. The key to success for pharmacists will be comprehensive training and multidisciplinary, interprofessional collaboration.

8 Pharmacogenomics Knowledge Base. www.pharmgkb.org/about (accessed May 2019).