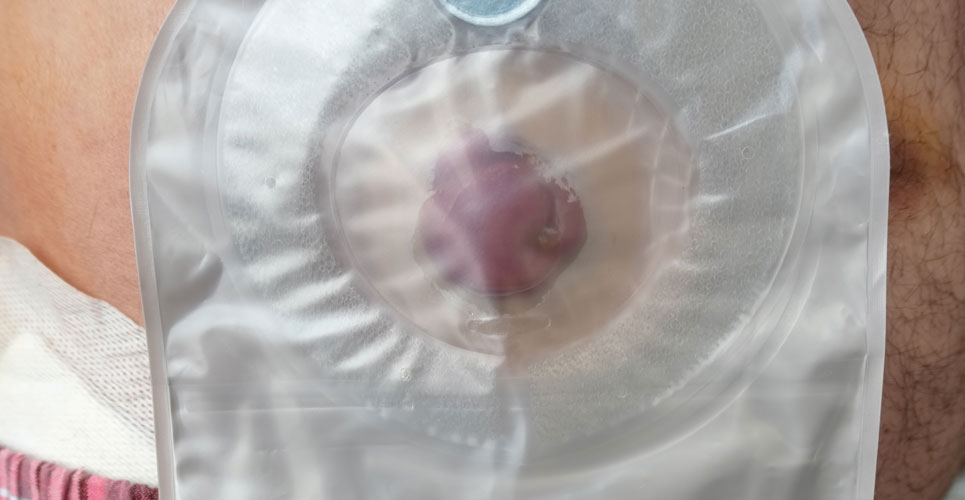 High output stomas are not commonly understood by all health care professionals and can be mismanaged. This article will discuss what stomas are, the different types, and the consequences of living with a high output stoma

The gastrointestinal tract begins with the mouth, which contains three pairs of salivary glands and is where digestion begins. Chewing breaks larger food pieces into smaller particles with the addition of saliva lubricating the food to aid with swallowing. The body produces an average of 500–1500ml of saliva per day.1 Alongside acting as a lubricant, saliva contains amylase, which partly digests complex sugars. These processes prepare the body for the movement of food from the mouth to the stomach using peristaltic wave-like motions via the oesophagus, which is approximately 25cm in length. Peristalsis continues into the middle of stomach and churns food together with gastric juices. The stomach secretes up to 2000ml of gastric juices per day, which contains 20–60mmol/l of sodium as well as protein-digesting enzymes and hydrochloric acid.1,2 Gastric acid converts a mass of food into ‘chyme’, a semi-solid mixture that moves into the small intestine (also referred to as the small bowel). The duodenum is the first part of the small bowel; it measures approximately 25cm in length and is the widest and most fixed part of the small bowel.3

Two adjacent organs – the pancreas and the liver – secrete substances that enter the duodenum via ducts. The exocrine function of the pancreas is to produce digestive enzymes and a bicarbonate-ion rich fluid. The bicarbonate ions neutralise the acidic chyme entering the duodenum from the stomach, which would otherwise inactivate the pancreatic enzymes. The pancreas produces on average 1500ml of secretions per day that contains 125–138mmol/l sodium.2,3 The liver produces approximately 500ml/day of bile. Bile contains bicarbonate ions, cholesterol, phospholipids and organic wastes, which are collectively called the bile salts. These salts solubilise dietary fats, aiding in their digestion and absorption. The small bowel itself secretes approximately 1500ml of fluid into the intestinal lumen: most of this fluid is reabsorbed in the jejunum, which is the second part of the small bowel and begins at the duodenojejunal flexure.3 The duodenum and jejunum constitute two-fifths of the length of the small bowel and the ileum comprises the remaining three-fifths. There is no set length of small bowel and it therefore varies between patients. Each litre of jejunal fluid contains approximately 140mmol sodium.2 Within the small bowel, the motility of the muscular walls mixes the luminal contents, which include the nutrients from the food, and brings these into contact with the epithelial surface, primed for absorption to take place. This peristalsis slowly moves the water, salt and undigested food from the ileum and into the colon. The colon consists of four parts: ascending colon; transverse colon; descending colon; and sigmoid colon. The right side of the colon reabsorbs remaining water and salts from the food moving through it. The left side of the colon helps to produce a solid stool and acts as storage, alongside propelling stool towards the rectum to be passed out of the body as a bowel motion.

What is a stoma?

The word stoma derives from a Greek word meaning mouth; mouthpiece; talk; voice; mouth of a river; any outlet or inlet. A stoma is a surgically-formed opening from the inside of an organ to the outside.4 A stoma is created to manage a range of illnesses, for example, diverticulitis, Crohn’s disease, the removal of a cancer, or following trauma to the abdomen.

Unpublished data from the British Healthcare Trades Association estimates there are 195,000 people in the UK currently living with a stoma.5 The stoma usually appears pink and moist and is warm to touch.

Tracheostomy, jejunostomy, ileostomy, colostomy and urostomy are all examples of stomas; the prefix (tracheo-, ileo-, etc) determines where the opening originates. Stomas can either be temporary, where reversal is planned, or permanent. Where stomas are permanent, there is no distal bowel remaining to re-join or the bowel cannot be re-joined due to other factors.6 Stomas can be further classified as an end stoma, a loop stoma or a double-barrelled stoma.7 This section will only focus on faecal output stomas.

At the surface of the abdomen, one opening – the stoma – is present. The surgeon fully divides the bowel lumen and creates one stoma, a proximal opening to allow the output of faecal matter. Depending on the type of surgery, the distal section of the bowel is either left within the abdomen or removed (Figures 2 and 3). These are the most common permanent stomas.

Loop and double-barrelled stomas are the most common temporary stomas. Figure 7 shows the anatomy of these.

The section of the bowel that forms the opening at the surface of the abdomen is the jejunum. The consistency of the output (effluent) is looser than from an ileostomy.

The section of the bowel which forms the opening at the surface of the abdomen is the ileum; the stoma is formed into a spout of about 2–3cm from the skin. The consistency of the effluent usually resembles porridge; however, it can be fluid when the ileostomy is first formed. Depending on the effluent consistency, patients may need to empty their stoma bags four–six-times per day. Ileostomies are the most common temporary stomas.

The section of the bowel that forms the opening at the surface of the abdomen is the colon, the stoma is ideally minimally raised. Colostomies tend to produce formed stools; however, the consistency might vary depending on the section of the colon used to form the stoma; for example, a looser consistency will be seen if the caecum is used compared with the sigmoid colon. Patients tend to produce one formed stool per daily and may experience multiple episodes of flatus.8 Colostomies are the most common permanent stomas.

The more proximal the section of bowel utilised to form the stoma the looser the consistency of output. In clinical practice, those with a higher stoma output tend to be patients with more proximally formed stomas.9

What is a high output stoma and what are the consequences?

The normal output from an ileostomy ranges from approximately 300ml to 800ml/day. Although there is no agreed definition of a high output stoma (HOS), it is generally considered as an output exceeding 1–2l/day.10 However, clinical significance is more likely when the output exceeds 2l/day, causing water, sodium and magnesium depletion, with malnutrition occurring as a late complication. Physiologically, jejunostomy patients are more likely to experience a HOS, where the absorptive function of the bowel is removed; it is unlikely to occur in those with a colostomy with retained small bowel, due to the large capacity for water resorption in the remaining colon, unless there is radiation damage, for example.10,11

It is important to know how much small bowel remains after a resection. Patients with <100cm of small bowel (referred to as short bowel syndrome (SBS) or intestinal failure) with a jejunostomy, are more at risk of a HOS than patients with an ileostomy, although HOS can still occur. Other factors that can cause a HOS in non-SBS patients include:

Differentiation of the cause is important to guide management.10 Symptoms of a HOS can include thirst, lethargy, hypotension, muscle weakness and cramps.9–11

Water and sodium depletion occurs in jejunostomy patients, especially after eating and drinking, as the absorptive function of the jejunum is significantly reduced. If ingested fluid has a low sodium concentration (hypotonic) not matching that of the jejunostomy fluid (approximately 100mmol/l sodium), the concentration gradient favours the loss of sodium from plasma. This also occurs with hypertonic fluids, containing sorbitol or glucose (for example, fizzy drinks). Therefore, patients are advised to limit their intake of hypotonic fluid to 1l/day and sometimes to 500ml/day. Patients will be advised to slowly sip 1l/day of oral rehydration solution, which contains approximately 90mmol/l sodium.10

Nutrition and magnesium depletion is another consequence of HOS. The small bowel functions to absorb water and nutrients from ingested food, owing to its large surface area. Reducing this surface area reduces the capacity to absorb these nutrients. Magnesium normally binds to fat-soluble vitamins and is absorbed in this way. However, in HOS patients, magnesium depletion occurs because of this absorption pathway and increased renal excretion; this could lead to muscle cramps and weakness.10

Nutritionally, dietetic input is valuable in aiding patients to understand how to adjust their diets to maintain an appropriate hydration and nutritional status. If a trial of an enteral diet does not suffice, an intravenous route to administer parenteral nutrition might be required.

In conclusion, it is important to understand that each type of gastrointestinal stoma behaves differently and the consistency and volume of effluent can vary. Knowing the signs and symptoms of a HOS can help to provide effective treatment before the patient begins to suffer metabolic effects. The type of stoma that your patient has can help guide management. This will be discussed in Part 2 of this short series included
in this issue.