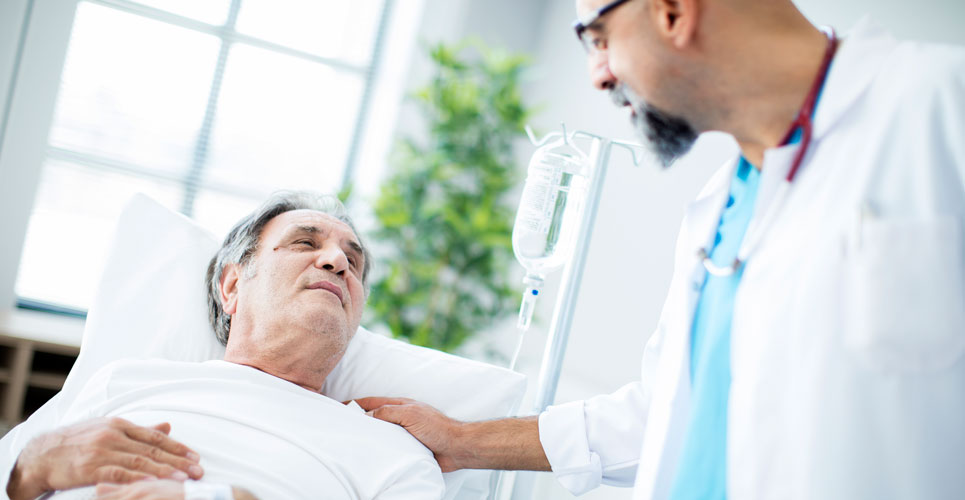 by Christine Clark PhD FRPharmS FCPP(Hon)
Support for the development of this report was provided by B. Braun
Published on 19 July 2019

Ready-to-administer intravenous ibuprofen solution for infusion has a good risk-benefit profile and is an effective component of multimodal peri-operative pain management, was the take-home message to participants at a B. Braun satellite symposium at the 2019 EAHP Congress

The analgesic properties of intravenous ibuprofen give rise to opioid-sparing effects. As a result, when intravenous ibuprofen is used in the peri-operative period, it can help to reduce opioid-associated side effects, according to Alexander Tzabazis (Senior Physician and Deputy Director of the Department of Anesthesiology and Intensive Care Medicine, University Hospital Schleswig-Holstein, Lübeck, Germany). It has found a role in multimodal analgesia that is a key element of enhanced recovery after surgery (ERAS). ERAS is also sometimes known as ‘fast track analgesia’ or ‘enhanced recovery Ωrogramme’ (ERP). ERAS involves a multidisciplinary approach to the care of the surgical patient, and is designed to minimise physiological stress, achieve rapid recovery and early discharge from hospital. The process starts at the pre-admission stage and calls for a suite of evidence-based measures at the pre-operative, intra-operative and post-operative stages – all designed to ensure fast functional recovery. It involves surgeons, anaesthetists and nurses and a multimodal approach. An essential part of the ERAS process is achieving the best possible pain control, explained Dr Tzabazis.

It is important to understand the difference between conventional (traditional) post-operative analgesia and that which is used in ERAS. In the conventional situation, clinicians aim for patients to have a pain score of zero (out of ten) in bed and three (out of ten) when moving but with ERAS a little more pain is acceptable. “We sacrifice some pain relief in the interests of other targets such as early mobilisation”, said Dr Tzabazis. He noted that the World Health Organization (WHO) pain ladder, in which treatment is progressively stepped up, was developed for cancer pain. For acute post-operative pain the ladder is used the other way round and is sometimes described as the ‘reverse’ or ‘top-down WHO pain ladder’. Thus, treatment starts with strong opioids and regional analgesia and steps down as pain decreases or resolves. ERAS emphasises fast functional recovery with oral food intake, normal bowel movements and urination, rapid mobilisation and normal cognitive function. Good pain control with minimal side effects is critical. However, postoperative pain is complex and multifactorial and multimodal analgesia, using a combination of two or more analgesics that act on different targets, can achieve better pain relief with fewer side effects than using a single agent alone, said Dr Tzabazis. In addition, this approach also reduces opioid consumption. Multimodal analgesia is strongly recommended for both open and laparoscopic abdominal surgery, he added.

A treatment algorithm for peri-operative multimodal analgesia after colorectal surgery illustrates the complete approach.1 It starts with setting realistic patient expectations at pre-operative clinics. On the day of surgery, intravenous and oral analgesics are administered pre-operatively together with local anaesthetics for local or regional anaesthesia. Adjunctive treatments such as ketamine or dexamethasone may also be added.

There has been much discussion about the merits of pre-emptive or preventive pain management. The thinking behind pre-emptive analgesic treatment was that giving a dose of analgesic before incision (surgical stimulus) might achieve a better analgesic effect but this was not borne out by clinical research findings. In contrast, preventive pain management, involving pre-operative and/or intra-operative analgesic administration resulted in duration of effect some 5.5-times the half-life of the drug – considerably longer than expected, commented Dr Tzabazis. When the concept was tested with ropivacaine, given for local anaesthesia before iliac crest harvest, pain relief persisted for 48 hours and opioid consumption was sharply reduced. “Ropivacaine has a half-life of only four hours and yet the effects persisted for much longer”, emphasised Dr Tzabazis.

Chronic pain after surgery (chronic post-surgical pain (CPSP)) is a recognised phenomenon with a separate ICD-11 code. It develops after surgery and persists beyond the normal healing time of about three months. “It is probably more common than people think”, said Dr Tzabazis. Studies show that it affects up to 55% of caesarean sections and up to 57% of mastectomy patients. The risk factors for CPSP include pre-operative chronic pain, and the duration and intensity of post-operative pain.
Turning to ibuprofen infusion, he noted that high plasma levels of the drug are achieved rapidly with intravenous administration. One analysis of the safety of intravenous ibuprofen2 showed that the median duration of treatment was two days and the median daily dose was 2900mg; there was no increase in side effects compared with placebo. In particular, it was important to note that there was no increase in the frequency of haemorrhages, said Dr Tzabazis.

When compared with intravenous paracetamol + fentanyl PCA in gastric surgery, ibuprofen + fentanyl PCA was superior to paracetamol and both (the paracetamol and ibuprofen combinations) provided better pain relief than the control treatment (fentanyl PCA alone).4 It was noteworthy that fentanyl consumption was more than halved and the need for rescue analgesics dramatically reduced, commented Dr Tzabazis. When pre-emptive ibuprofen 800mg was administered 30 minutes before septorhinoplasty surgery, a similar pattern was seen.5

However, IV ibuprofen cannot be given to everyone, Dr Tzabazis cautioned. Its use is contra-indicated in patients with ibuprofen allergy, active bleeding or thrombocytopenia, and can only be used for short periods in patients with cardiovascular disease. On the other hand, uncontrolled pain can itself be a risk factor for CV disease and it is safe to administer intravenous ibuprofen to a patient who has a history of gastro-intestinal bleeding if they are receiving a proton pump inhibitor, he noted.

In summary, he said that intravenous ibuprofen is an analgesic option in the peri-operative period because it has good analgesic and opioid-sparing effects, and therefore it may reduce the incidence of opioid-associated side effects. It is safe and effective for short-term use and has the advantage of being a well-known drug with decades of clinical experience. In addition, there is now emerging evidence for pre-emptive/preventive analgesic effects.

Pain management is critical in ERAS because patients are expected to eat and move as soon as possible, Dr Ruben Casans (Anaesthetist, University Hospital of Infanta Elena, Madrid, Spain) told the audience. In order to achieve good pain control a combination of intravenous, regional and local anaesthetics is needed, combined with avoidance of opioids, as far as possible. Multimodal analgesia is the gold standard but in many hospitals “there is a lot of resistance” and, consequently, there is considerable variation in the use and effectiveness of ERAS, he continued.

NSAIDs are in many ways ideal painkillers because they are available in intravenous and oral formulations and have relatively few side effects.

Dr Casans has extensive experience of the use of ERAS in trauma and orthopaedic surgery. He started work at a trauma centre in Zarogoza at the same time as intravenous ibuprofen was introduced in the hospital. However, regardless of whether treating young, fit trauma patients or elderly patients undergoing knee or hip replacement surgery, the goal is the same. The ERAS protocol aims to ensure the least possible pain together with early mobilisation and early discharge from hospital, he said.
The analgesic protocol for trauma involves multimodal pain treatment with NSAIDs, paracetamol, metamizol and opioids in the emergency situation. Intravenous NSAIDs are also included at the post-operative stage. Indeed, intravenous ibuprofen is a logical first step for post-operative analgesic treatment. The introduction of intravenous ibuprofen was particularly welcome because it is better than other NSAIDs, in Dr Casans’ experience.

The ERAS pathway for total knee or hip replacement originally included a dose of a COX-2 inhibitor in advance (pre-admission) but this is not required if intravenous ibuprofen is administered pre-operatively. When it became clear that intravenous ibuprofen could be used both pre- and post-operatively it became easier to gain acceptance for the drug. “It is easier to change surgeons’ habits if they do not have to change molecule and have the risk of unfamiliar side effects”, said Dr Casans. As a result, intravenous ibuprofen was put into the ERAS protocol for total hip and knee replacement at the pre-operative stage, and also for post-operative pain relief and for general ward/going home use, he said.

In conclusion, Dr Casans said he had a strong feeling (based on his experience) that intravenous ibuprofen has a better safety profile than other NSAIDs and is therefore the preferred NSAID for use at the pre-operative stage.

Intravenous ibuprofen has a good risk-to-benefit profile, with a short elimination half-life, wide therapeutic window and lack of prolonged retention in specific body compartments; it is a relatively safe drug, according to Carlos Garcia (Hospital Pharmacist, University Hospital of the Virgen de las Nieves, Granada, Spain).

Intravenous ibuprofen is presented in doses of 400mg and 600mg in a ready-to-administer form (Ecoflac containers). In Spain, a 600mg vial is also available as a product for preparing elastomeric pumps.

The usual dose is 600mg every 6–8 hours. The maximum daily (24 hour) dose is 2400mg in Spain and 1200mg in other European countries. There is no benefit in exceeding the 600mg dose as studies have shown that 800mg is no more effective. It can be used in mild to moderate renal and hepatic failure without dose reduction but is not recommended in severe renal or hepatic failure.

Ibuprofen is widely regarded as a drug with a good safety profile. Reports show that the overall incidence of adverse events is lower in patients receiving intravenous ibuprofen than those receiving placebo. One review of ibuprofen overdoses said that, “no patient ….. who has ingested less than 99mg/kg has developed any symptoms”.

Ibuprofen compares favourably with other intravenous, non-opioid analgesics, explained Mr Garcia. Dexketoprofen, for example, is presented in ampoules and has to be diluted with saline before administration. The final preparation has to be protected from light. It has a limited dose range and the maximum duration of treatment is two days, compared with three days for intravenous ibuprofen.

Metamizol (which is not available in the UK) has no anti-inflammatory action and has to be diluted before administration. It is also associated with serious adverse events – agranulocytosis and anaphylactic shock.

Mr Garcia concluded that [intravenous] ibuprofen is the most suitable NSAID to treat and prevent pain when opioids are not necessary.

*Metamizol (dipyrone) is an analgesic and antipyretic agent. It is banned in the UK because the risk of agranulocytosis is judged to be too high for safe use.

5 Gozeler MS et al. Does a single-dose preemptive intravenous ibuprofen have an effect on postoperative pain relief after septorhinoplasty? Am J Otolaryngol 2018;39:726–30.