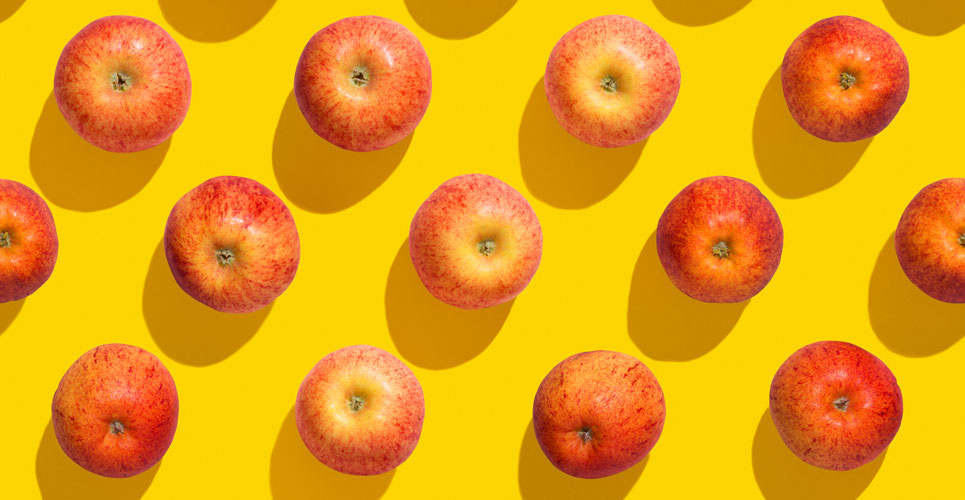 An apple a day to keep the doctor away, or should that be two?

The old adage that an apple a day keeps the doctor away has some credibility as apple consumption can lower cholesterol levels and thus cardiovascular disease risk. But will eating two apples double the benefits?

A recent study set out to explore the health benefits of this approach.

The aphorism “an apple a day keeps the doctor away” was first coined in 1913 by Elizabeth Wright,1 but the actual quote appeared in print much earlier and was originally, “eat an apple on going to bed and you’ll keep a doctor from earning his bread”. Apples are one of the most commonly eaten fruits in the world and consumed either in their natural state or processed as juice or puree. Apples contain several different phytochemicals, in particular, polyphenolic compounds which are thought to be associated with a range of beneficial health effects including a reduced risk of cancer, cardiovascular disease, asthma and even Alzheimer’s disease.2

Furthermore, one study in 1456 women aged 70 years and over who were followed for 15 years found that those who ate one apple per day had a 35% lower risk of all-cause mortality.3

Many of the health benefits of apples are derived from flavonoids including quercetin and epicatechin which can increase nitric oxide availability, improve endothelial function and blood pressure.4 These flavonoids are present in the skin and the positive effects on nitric oxide and endothelia function only occur when apples are eaten whole rather than just the flesh.5

Apples probably reduce cardiovascular disease risk by lowering cholesterol levels and a study in 1977 observed that consuming two apples per day decreased total cholesterol levels by as much as 8%.6 However, this study did not have a control group. Fast forward 43 years and a new study in the February 2020 issue of the American Journal of Clinical Nutrition, examined the effects of eating two apples each day on cholesterol levels, vascular functioning and blood pressure.7 The study included 43 healthy volunteers aged 29 to 69 years of age, with mildly elevated cholesterol and was a randomised, controlled, cross-over trial. The study compared whole apple consumption compared to a calorie-matched apple juice. Participants ate two apples daily for eight weeks then no apples for four weeks (the washout period) and switched to apple juice for another eight weeks. A number of assessments were made including height, weight, body fat, cholesterol levels, markers of inflammation (tumour necrosis factor, interleukin-1ß, interleukin-6), endothelial function (intercellular cell adhesion molecule-1 (ICAM-1), changes in blood pressure and arterial stiffness.

At the end of the trial, eating two apples a day compared to drinking apple juice, lead to a small, but statistically significant reduction in total cholesterol (5.89 mmol/l vs 6.11 mmol/l), an equally small reduction in levels of both Low density lipoprotein (LDL) (3.72 mmol/L vs 3.86 mmol/l) and triglycerides (1.17mmol/l vs 1.3 mmol/l) and a slight decrease in ICAM-1 levels which is a marker for the early stages of atherosclerosis. However, the authors observe no increase in high density lipoprotein (HDL) cholesterol, changes in blood pressure, arterial stiffness or the levels of other inflammatory markers.

It therefore seems having one apple a day is sufficient to reduce cholesterol levels but that there is little to be gained from eating two. But what about the old adage? Can eating an apple a day keep the doctor away? Sadly, it seems not. In 2015, researchers set out to answer this question by comparing the number of physician visits during the past 12 months between apple eaters and non-eaters. The primary outcome was defined as no more than one self-reported visit to a doctor in the preceeding 12 months. While the difference in visits between apple eater and non-eaters was 39% vs 33.9% and statistically significant, in the adjusted analysis, the result was no longer significant.9