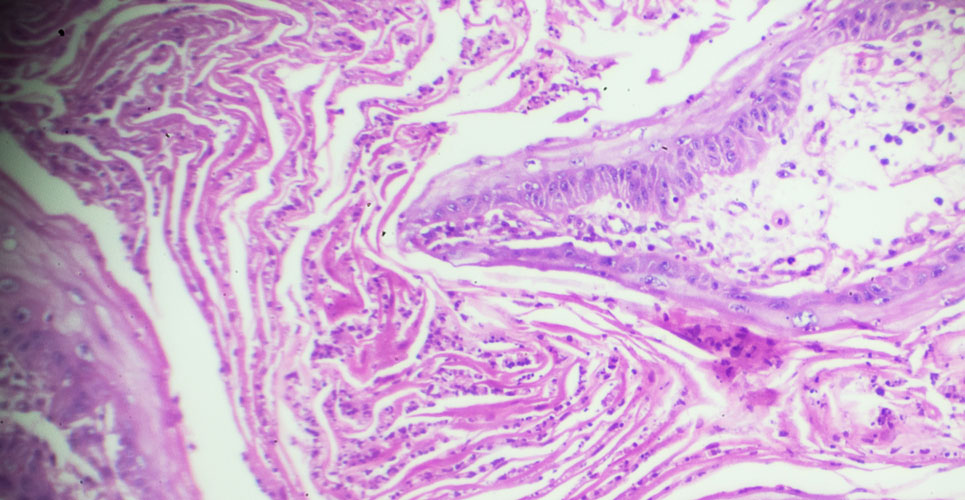 It is generally considered that that the rate of conversion of actinic keratoses into squamous cell carcinoma is low although this has been derived from short-term studies.

The presence of actinic keratoses (AK), i.e., areas of scaly skin, often develop in response to years of chronic sun exposure. Such lesions are very common with one study indicating a prevalence of 49% in men and 28% in women. However, a more worrying concern is that AKs can transform into a squamous cell carcinoma (sCC) especially as cumulative sun exposure is a known risk factor for this cancer. The rate of conversion of an AK into a squamous cell carcinoma is unclear and highly variable and thus whether the presence of AKs represent an adequate proxy measure for sun-damaged remains to be seen. Given this uncertainty, a team from the Department of Dermatology and Mohs Surgery, Kaiser Permanente, California, US, undertook a large, community-based, retrospective and longitudinal study, to assess the risk of sCC, 10 years after a diagnosis of AK. The team included patients who had a recorded consultation in 2009 and for which a diagnosis of an AK was made and excluded those with a history of sCC, melanoma, organ transplant and HIV within 2 years of their AK diagnosis. The AK patients were age and demographically matched with a group of non-AK patients. All of the clinical data was obtained from the patient’s electronic health record starting two years before the date of diagnosis and until the end of the follow-up period, February 2020. The primary outcome measure was the incidence of sCC which was obtained from pathologic data.

Findings
The researcher matched 220,236 patients with a diagnosis of an AK to those without the condition. Overall, the sample had a mean age of 64.1 years (52.5% female) and were predominately (89.5%) of White ethnicity. After 10 years of follow-up, the incidence of sCC in those originally diagnosed with an AK was 17.1% compared with 5.7% in the matched control patients. Furthermore, the risk of developing a sCC was found to be 7 times higher among those aged 49 years or younger with an AK, (hazard ratio, HR = 6.77 95% CI 5.50–8.32).

The authors calculated that the incidence rates of sCC were 1.92% per year after a diagnosis of one or more AKs and 0.83% per year among those without an AK. Interestingly, the number of AKs present (which represents more severe sun-damage) was only modestly associated with the risk of sCC.

They concluded that the results should be used to educate patients on the signs of progression to a sCC and when it would be appropriate to contact a healthcare practitioner.