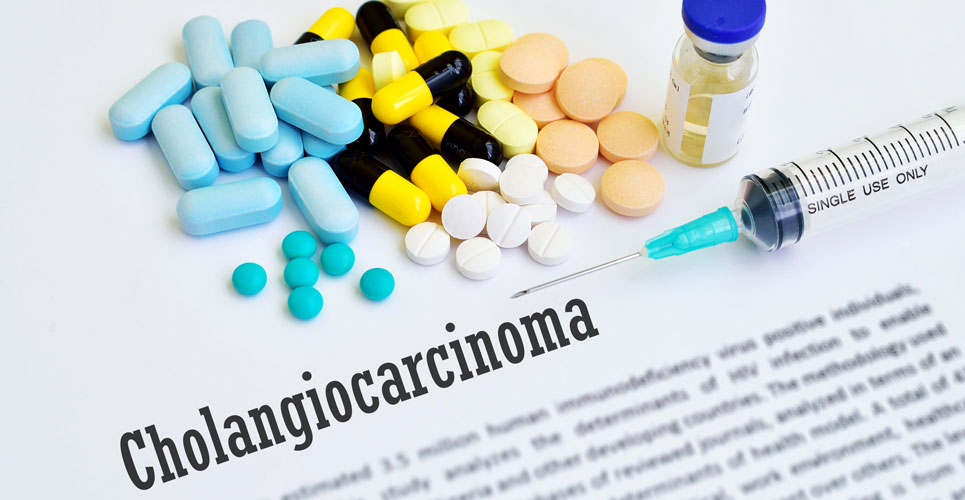 Pemigatinib, an oral kinase inhibitor, has received approval from NICE as a second-line treatment for advanced cholangiocarcinoma.

Bile duct cancer or cholangiocarcinoma (CCA), is a rare form of cancer with an approximate incidence of 3.58 cases per 100,000, occurs in the tubes carrying bile into the digestive system. It can be further subdivided into two forms, depending on whether the cancer develops within the liver itself (i.e., intrahepatic, iCCA) or outside of the liver, extrahepatic (eCCA). Data from Cancer Research UK, suggest an estimated 1900 cases of iCCA each year but far less (530) cases of eCCA. As CCA is largely asymptomatic in the early stages, an unfortunate consequence is that around 70% of patients are diagnosed with late stage disease. There is also a poor 5-year survival, with figures for 2012 indicating a level of only around 5%, and in 2017, there were a total of 2523 deaths in England alone. Since a large proportion of patients are diagnosed at a late stage of the disease, surgical resection (which is the only curative treatment), is no longer an option.
Studies have shown that two-thirds of patients with cholangiocarcinoma have genomic alterations. One such alteration is in the fibroblast growth factor receptor (FGFR) pathway which is responsible for cellular migration, proliferation, survival and differentiation. There are at least four different isoforms of FGFR and genetic aberrations such as chromosomal translocations or fusions in the FGFR pathway, contribute to malignant transformation and have been observed to occur in 13% of iCCA.

Treatment
There is currently no standard care treatments for cholangiocarcinoma and in particular for for patients with FGFR fusion/mutations. Pemigatinib is a potent oral inhibitor of FGFR isoforms and has been shown to be of benefit in patients with cholangiocarcinoma with FGFR alterations. Results from the FIGHT-202 study, in which previously treated patients with advanced metastatic cholangiocarcinoma with FGFR mutations, were given pemigatinib monotherapy at a starting oral dose of 13.5mg daily for a 21-day cycle (two weeks on, 1 week off). Treatment with pemigatinib for a median duration of 8 months in 108 patients, led to an overall treatment response rate of 35.5%, which included three complete remission and 35 partial responders. Overall, 71 patients died, mostly because of disease progression although there were no deaths deemed to be treatment-related, leading the authors to conclude that their data supported the therapeutic potential of pemigatinib in previously treated patients with FGFR fusions.

The drug is already approved in Japan, Europe and the US and according to Helen Morement, founder of The Cholangiocarcinoma Charity, ‘the availability of pemigatinib marks a major milestone in the fight against cholangiocarcinoma, bring new hope for our patients with the devastating type of liver cancer”. The decision by NICE will not only give patients an alternative to chemotherapy but access to molecular testing.