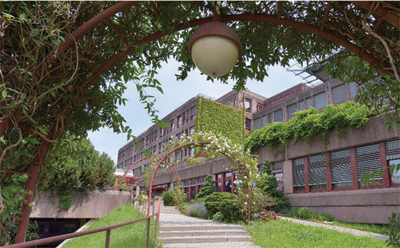 Advancing medication management into the future

Support for the development of this report was provided by BD

Support for the development of this report was provided by BD

STS AG Hospital in Thun, Switzerland has partnered with BD (Becton, Dickinson and Company), to become the first hospital in the world to introduce a fully automated hospital-wide prescription medicines supply chain, enabling, safe, secure, timely and efficient delivery of patients’ medicines from the central pharmacy to the ward or care unit. The increased automation reduces the risk of preventable medication errors and helps to improve safety for patients across the hospital. The additional level of automation has allowed the pharmacy team to optimise workflow efficiency while decreasing preventable errors when dispensing medicines to the wards. Spital STS AG began introducing automation in 2001. Although the clinic was already using medicine cabinets (BD Pyxis™ MedStation™ 3500 systems) with electronic prescription and patient dossier (CPOE phoenix), as well as an automated storage system since 2013 (BD Rowa™) and a pharmacy IT system (Nexus), manual interfaces and media discontinuities prevented full exploitation of the added benefits. Many clinic and hospital pharmacies1 have started to introduce automation in recent years, especially in relation to automated storage systems.
The new generation of medicine cabinets in Thun were connected to the pharmacy IT system and the associated automated storage systems (BD Rowa Vmax™ System) in 2016. This allowed a closed medication cycle (closed loop) for the first time – from prescription, to dispensing of medication to the patients. The goal of the study was to provide an initial overview of the advantages that could be gained in relation to workflows and, in part, to illustrate consequences for medication safety.2

The newly developed BD Pyxis™ CUBIE™ system became available in the Thun clinic with the rollout of the new BD Pyxis™ ES systems and was used for pre-filling the newly designed intelligent medicine boxes (known as BD Pyxis™ CUBIE™ pockets). The CUBIE pockets were filled with medicines by pharma technicians and counter-checked by a pharmacist. The new system offered an advantage here in that pharma technicians could fill the medicines independently of the pharmacist and thus work faster. There was an upper limit on the number of CUBIES that could be filled in the old system for reasons of space.
Prior to 2017, re-orders for Pyxis systems were printed on paper and then validated. The quantities were adapted by a pharmacy technician if necessary, and manually entered in the system. Goods in the BD Rowa Vmax™ were subsequently picked by the system automatically. The majority of goods of relevance for Pyxis, including CUBIES, had to be additionally manually picked from secondary storage (Figure 1). With the upgrade to BD Pyxis™ ES System and the introduction of the new interfaces in 2017 between the BD Rowa Vmax™, the BD Pyxis™ ES System and the materials management system/ERP Nexus Matman, re-orders from Pyxis were imported directly into the Nexus Matman. The picking order was forwarded to the BD Rowa Vmax™ once the order was validated by a pharmacy technician. Because the upgrade allowed CUBIES to be stored in the BD Rowa Vmax™, the majority of the re-ordering for Pyxis was picked by the robot. The manual additional picking from secondary storage could therefore be reduced to a minimum (Figure 2). The BD Pyxis ES System provides secure storage of most drugs on the ward and facilitates improved patient safety and efficiency in medication dispensing. Ward staff can call up the drugs prescribed by the clinician directly on the dispensing cabinet screen and only those drugs are dispensed, ensuring the right drug is dispensed to the right patient in the right dose at the right time. Individual drugs are stored in separate drawers and pockets (BD Pyxis™ CUBIE™ Pockets).
If the stock is low in any of the CUBIE pockets, the BD Pyxis™ MedStation™ sends a replenishment order to the hospital pharmacy. Thun Hospital houses 15 of the latest generation BD Pyxis™ MedStation™ ES Systems across all of its wards. Traditionally, medication-dispensing cabinets were manually filled and replenished with drugs by the hospital pharmacy. When a replenishment order is received by the pharmacy, via Nexus software the pharmacy technician selects the correct drug from the correct shelf and fills a new CUBIE, which is then sent to the MedStation system that sent the restocking order.
By working in collaboration with BD, new interfaces have been developed which enable direct communication between BD Pyxis MedStation ES Systems medication dispensing cabinets on the wards and the BD Rowa Vmax™ System in the hospital pharmacy. The newly developed interfaces allow new refill orders for the individual MedStations to be sent automatically via the material management system and pharmacy validation to the BD Rowa Vmax™ System. The robot can store the pre-filled CUBIE pockets and its robotic arm picks the cubie pocket that contains the refill order and sends it to the correct BD Pyxis MedStation ES for dispensing. Because the BD Rowa Vmax™ System has a large storage capacity, it can handle the bulk of a refill order independently and make the medications available more quickly and more efficiently than manual picking by the pharmacy staff can.

The time required to fill CUBIES and pick re-orders was measured with a stopwatch before and after the introduction of the interfaces. The complete workflow for filling CUBIES was compared in the old and new system. The time required for filling as well as checking the CUBIES was recorded separately and added (number of filled CUBIES in the old system = 491, new system = 316; number of checked cubies in the old system = 331; new system = 478). The time recorded did not include the preparation of the medicines because this work step was not influenced by the changes.
In terms of picking for Pyxis, the time required for the entire workflow – from processing re-orders, picking, through to settlement in the old and new system – was compared. The time was recorded for each ward and considered in relation to the number of requested items (number of lines; in 2015 = 90; in 2017 = 87).
A comparison was then made of the average working time per line based on the old and new approaches.
The automated picking from the robot (894 items) was compared with the manual picking from the other storage (362 items) and showed a reduced number of misdeliveries. Measurements were taken over a period of three months. The pharmacy technician carried out a survey of the total number of misdeliveries that were identified either in the dual control process or subsequently by the nursing ward. An analysis was also made of whether the misdelivery was caused by the nursing ward (incorrect request) or by the pharmacy (incorrect recording or incorrect picking). Averted misdeliveries were identified by multiplying the failure rate measured from the storage with 362 items by the number of items in the BD Rowa Vmax™ System.

The processing time for Pyxis refills per line was successfully reduced from 54 seconds to 12 seconds. The introduction of the new interfaces and the option to store CUBIES in the robot yielded an average time saving of approximately 78% (Figure 3). In terms of filling CUBIES, no big time gain was established in the new system. On average, 46.3 seconds were required in the old system whereas 45.2 seconds per CUBIE were required in the new system. While the new BD Pyxis CUBIE System allows the pharmacy technician to work independently, the additional work steps required prevented any time gains. The result recorded in terms of quality was that pharmacists had to intervene increasingly in cases of more complex problems with the system. The shorter setup times resulted in some savings for the pharmacy technicians. By contrast, additional time was required the pharmacists for system support. When recording the misdeliveries, it could be assumed that no incorrect deliveries arose as a result of inaccurate picking in the case of the robot in the closed loop. There were 18 misdeliveries from the storage with manual picking over the three recording months (all caused by the pharmacy); 15 were identified during the dual control and three on the ward. If the errors are calculated as a proportion of the number of items in the secondary storage compared with the number in Rowa, around 44 misdeliveries were successfully avoided in three-month assessment period.

The verdict after just a short period of use, during which time some teething problems had to be overcome, was that the closed logistics cycle was beneficial and the expected time savings in processing the setup lines were confirmed. The filling of CUBIES by the pharmacy technician independently of the pharmacist allowed enhanced flexibility. Even on busier days (for example, Friday), the setup activities were managed within a reasonable time. If the connected software systems caused technical problems, these generally consumed more personnel resources, including pharmacist time. Manual stock control mechanisms were wasted as a result of the automation. This led to additional overheads in relation to delivery processes, and these need to be optimised. The benefits have been primarily in terms of flexibility from using the new solution but not time gains; however, this will need to be confirmed by further measurements.
In the three-month period under review, approximately 44 misdeliveries were prevented through automatic picking with the BD Rowa Vmax™ System. This number should probably be higher because the recording of misdeliveries was not the top priority during day-to-day working (under-reporting). Likewise, errors in manual picking are likely to fluctuate sharply and be influenced by stress or inefficient allocation of staff; by contrast, automated processes are not affected by these factors. The reduction in misdeliveries on the wards contributed directly to medication safety.
Jason Strohm, worldwide Vice President and General Manager of Dispensing and Preparation Technologies for BD has commented, “BD is committed to improving patient safety by reducing medication errors across the care continuum. Our integrated solutions, combined with the expertise and knowledge of our team are helping care providers around the world to streamline their medication management workflows and optimise the cost of ownership. Thun Hospital is setting new standards of care by embracing innovation and new technologies, and we are very proud to be working with them to achieve their goals.”

www.hospitalpharmacyeurope.com to view the STS AG Hospital case study video and learn more about the project