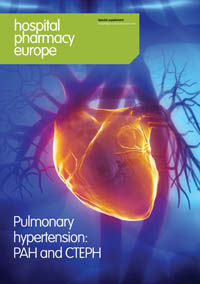 Pulmonary arterial hypertension (PAH) is defined, according to the WHO Classification (see Table 1), as a group of diseases characterised by a progressive increase of pulmonary vascular resistance leading to right ventricular failure and death.(1,2) Without targeted treatments, the median life expectancy from the time of diagnosis in patients with primary pulmonary hypertension (PPH) is 2.8 years.(3) PAH includes PPH(1) and pulmonary hypertension associated with various conditions such as collagen vascular diseases, congenital systemic-to-pulmonary shunts, portal hypertension and HIV infection.(2) All these conditions share virtually identical obstructive pathological changes of the pulmonary microcirculation, suggesting that pathobiological processes are also shared among the disease spectrum of PAH.

The pathogenesis of PAH involves multiple and complex mechanisms, including endothelial dysfunction in the pulmonary circulation, resulting in pulmonary vasoconstriction and vascular remodelling. The endothelial cells modulate smooth muscle cells activity by producing vasodilators/antimitotics, such as prostacyclin and nitric oxide (NO), and vasoconstrictors/mitogens, such as thromboxane A(2) and endothelin-1 (ET-1).

Endothelial dysfunction is a condition in which the physiological balance between vasodilator/antimitotic stimuli and vasoconstrictor/mitogen substances is shifted towards the latter. This balance change has been clearly observed in PAH.(4) In fact, increase in the 24h excretion of a thromboxane A(2) metabolite and reduced excretion of a prostacyclin metabolite have been demonstrated in PAH patients. Prostacyclin synthase expression is reduced in the pulmonary arteries of patients with PAH; in addition, endothelial NO-synthase expression is reduced in the lungs of patients with PPH. Furthermore, in patients with PPH, ET-1 plasma levels are elevated, the increase being correlated with right atrial pressure, pulmonary artery oxygen saturation and pulmonary vascular resistance.(5,6) Therapeutic strategies have recently been targeted at the correction of all these changes, which are related to the endothelial dysfunction of the pulmonary vasculature.

Treatment strategies
Recent clinical trials with novel compounds have led to a tremendous increase in both knowledge and therapeutic options for patients with PAH.(7–9) The analysis of placebo-treated groups in the various trials has led to a better understanding of the natural history of PAH in conventional treatment. Signs of functional and haemodynamic deterioration are detectable as early as after three months (and also in previously stable patients). The new trials have similar designs, duration and endpoints, but relevant differences, including baseline NYHA functional class and aetiology profiles, need to be taken into account in the comparative evaluation of these studies. Each new compound presents side-effects that are unpredictable in the individual patients and require appropriate attention upon treatment initiation and maintenance. The lack of effect on mortality can be explained by the study protocols, which were not designed for assessing this endpoint, and by the overall low mortality of the study populations compared with historical controls.

Open-label extension studies will demonstrate whether the favourable effects and safety profiles observed in the randomised phases are maintained in the long term. Unfortunately, in these cases, the effects on mortality can be assessed only by comparison with historical controls.

The numerous controlled clinical trials recently performed in PAH seem to point toward abandoning clinical-based treatment strategies and adopting evidence-based therapies. The treatment strategies are targeted at patients in the NYHA functional classes III and IV, the patient population predominantly enrolled in clinical trials. For NYHA functional classes I and II patients, the most appropriate strategy has still to be determined. In addition, the different treatments have mainly been evaluated in sporadic idiopathic PAH patients, and in PAH associated with scleroderma or anorexigens use. Extrapolation of these recommendations to the other PAH subgroups should be made with caution.

Traditional approach
The traditional approach to treat all PAH patients with oral anticoagulant drugs (INR of 2.0–2.5) and diuretics in the case of right heart failure has been confirmed, even if controlled studies are lacking. Long-term oxygen treatment is suggested only in patients with demonstrated hypoxaemia. The vasoreactivity test with invasive haemodynamic guidance is also mandatory to identify the minority of patients with a favourable acute response (approximately 20%). In this group, chronic treatment with high doses of Ca(2+)-channel blockers is justified, but clinical, functional and haemodynamic improvements need to be confirmed after 3–6 months with formal noninvasive and invasive investigations. All these procedures are more safely performed in experienced centres, due to the rarity of the disease and the
potential risks.

New compounds
In patients who do not respond to acute vasoreactivity tests, treatment with an endothelin receptor antagonist (ERA) or with a prostanoid is indicated.(8,9) This treatment is also indicated in patients in the NYHA functional class III who respond to these tests but for whom chronic Ca(2+)-channel blockers treatment is not favourable.(8,9)

The only ERA currently available is the oral active dual antagonist bosentan, which has been successfully tested in two controlled trials. Treatment with bosentan (125mg bid) improved exercise capacity, functional class, haemodynamics, echocardiographic and Doppler variables, and time to clinical worsening.(10) Increases in hepatic aminotransferases, which occurred in 10% of the patients, were found to be dose-dependent and reversible after dose reduction or discontinuation.

Among the prostanoids class,(8) treprostinil, administered subcutaneously (continuous subcutaneous administration by a small pump), has been approved in the USA; the drug was tested in two controlled trials, and the primary endpoint of exercise capacity was fulfilled in only one of these trials. Treprostinil treatment improves haemodynamics and exercise capacity, with the main side-effect being pain at the site of infusion.

Iloprost, administered by aerosol (6–12 daily administrations), has been approved in Europe for NYHA class III PPH patients, and it has been tested successfully in one controlled trial. Iloprost improves exercise capacity and haemodynamics and reduces clinical events.(11)

Beraprost, which is administered orally (mean dose of 80mg four times a day), is approved in Japan; the drug was tested in two controlled trials, with the primary endpoint of exercise capacity being fulfilled in only one of them. The delivery of this drug for compassionate use has been stopped.

The first class of drug and the specific compound to be initiated in NYHA class III patients are related to different factors, including approval state, preferred way of administration, side-effect profile and specific experience of the trial centres.

The orally active phosphodiesterase V inhibitor sildenafil has not yet been approved for the treatment of PAH patients, although multiple uncontrolled favourable experiences have been documented.(12) The results of a pivotal randomised controlled trial involving approximately 300 PAH patients are expected for the second quarter of 2004. The results of this major trial will define the precise role of sildenafil in the treatment algorithm of PAH.

In patients with NYHA functional class III, continuous intravenous (IV) administration of epoprostenol should be considered as first choice (as documented by two controlled trials with favourable results), as the best effects on survival are observed in this functional class.(8) Continuous IV administration of epoprostenol is the treatment of choice in patients in the NYHA functional class IV, and it is approved in the USA and Europe. For these patients, bosentan and treprostinil also have official approval by the FDA; however, considering the small number of patients included in the clinical trials, experts consider these treatments as second choice. Iloprost administered IV (continuous IV administration) is approved in New Zealand, although no controlled trials are available. Continuous IV administration of epoprostenol may also be indicated in NYHA class III patients who have no favourable effects with ERAs or with other prostanoids.(8)

Combination therapy (ERA + prostanoids) must be considered if no improvement or if deterioration is observed with the first treatment, although data on this specific strategy are scarce and uncontrolled. The combination of epoprostenol and bosentan in a clinical trial has induced a trend for a greater (although nonsignificant) improvement in all haemodynamic parameters in the combination treatment group, compared with epoprostenol alone. Ongoing or planned additional trials will explore the effects of combinations using epoprostenol with sildenafil, sitaxentan and ambrisentan, respectively. Uncontrolled studies showed that, in PAH patients deteriorating despite chronic treatment with non-parenteral prostanoids, addition of bosentan or
sildenafil to the ongoing treatment resulted in improvement of pulmonary haemodynamics and exercise capacity. Appropriate protocols for timing and dosing to limit the possible side-effects of the combination need to be implemented.

In the case of failure and/or unavailability of medical treatments, balloon atrial septostomy and/or lung transplantation are indicated. These procedures should be performed in experienced centres. Balloon atrial septostomy is indicated for advanced NYHA class III and class IV patients, either as a bridge to lung transplantation or as the sole treatment modality when other options are not available.

Lung transplantation is indicated in PAH patients with advanced NYHA class III and class IV symptoms that are refractory to available medical treatments. The three- and five-year survival rates after lung transplantation are approximately 55% and 45%, respectively. Unpredictability of the period on the waiting list and donor organ shortage complicate decision-making regarding the appropriate timing of listing for transplantation.

Conclusions
The multiple controlled trials recently performed in PAH indicate that clinical-based treatment strategies should be replaced by evidence-based therapy. These treatment strategies are restricted to patients in the NYHA functional classes III or IV, as they represent the largest population included in controlled trials. For NYHA class I or II, very few data are available. In addition, the different treatments have mainly been evaluated in sporadic PPH patients, and in PAH associated with scleroderma or anorexigens use. Extrapolation of these recommendations to other PAH subgroups should be made with caution.