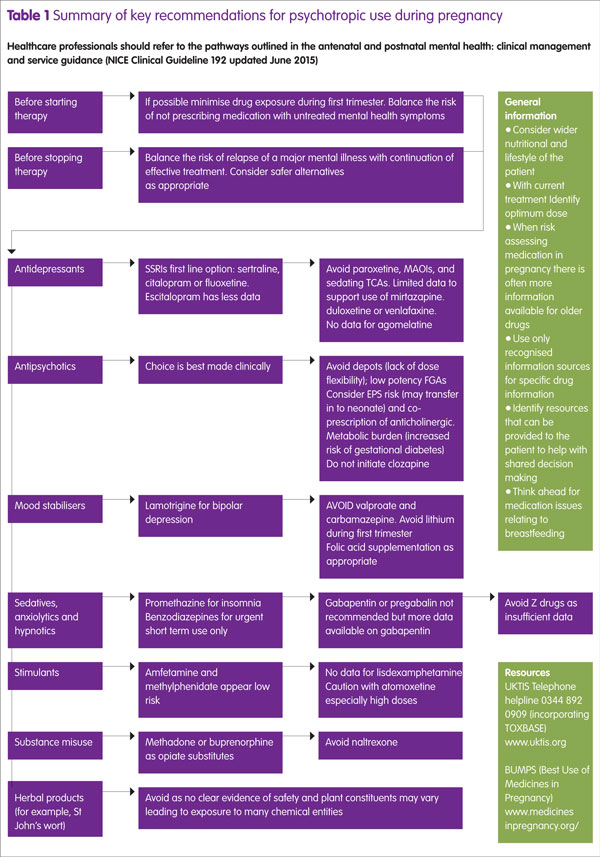 Historically, pregnancy was thought to be protective against psychiatric illness, but there is a high rate of relapse in patients with existing mental health conditions who stop their psychotropic medication. Estimates of relapse vary but are 50% of patients with schizophrenia, 68% of patients with major depression, and upwards of 80% patients with bipolar disorder. In bipolar disorder, the relapse rates reduce to 29–37% in those who continue their medication.1 The Bipolar Disorder Research Network (BDRN) website (http://bdrn.org/) has some useful information on risks associated with a bipolar diagnosis and notes factors, such as poor sleep, as triggers for a manic episode. Women with a previous history of depression, a family history of a mood disorder, or depression during the current pregnancy are at increased risk for postpartum depression.2
If you choose to treat with medication, then the aim should be full resolution of symptoms, even if it means increasing the dose, as otherwise the foetus is exposed to both medication and illness.
Planning a pregnancy
There are many factors that can make for a healthy pregnancy and although the primary focus of this article is on psychotropic medications, a broader holistic assessment of the patient’s circumstances is required. If the patient already has a psychiatric diagnosis, this can impact on risk of relapse. Second pregnancies may carry different levels of risk but, from the patient’s perspective, what happened before is likely to influence some of their decisions.
If a patient’s pre-existing mental health condition has a consistent cyclical element, then aiming to conceive when at lower risk of a breakthrough episode may be considered, although, in practice, this may be difficult to achieve. The preconception stage is a good place to look at wider nutritional needs, some of which may be linked to diet and lifestyle.3 Key points to note are:
With regard to existing psychotropic treatment, the weight of diagnosis as a risk factor for relapse must be accommodated. Information to support risk assessment of existing treatment during pregnancy sits within many resources, including generic sources such as the British National Formulary, as well as more specialised websites (see resources). Most detail is likely to be found at TOXBASE (registration required), which is part of the UK Teratology Information Service (UKTIS). Linked to UKTIS is a very user-friendly website called BUMPS. This site is patient-oriented and houses good quality information leaflets; the site also encourages patients to register their pregnancy outcomes and thus help grow the database of knowledge of pregnancy outcomes with medicines. Hence, reviewing treatment, optimising dose, and switching to alternative treatments that carry lower risk of foetal toxicity if appropriate can be undertaken with reference to a number of resources to support you in discussions with the patient and partner. Healthcare professionals must not forget the yellow card system if any untoward events do occur with prescribed treatments.
Suddenly I’m pregnant
The key message is that an unwell mother is a risk factor for a poor outcome. If good psychological wellbeing involves continuing with psychotropic agents, then that should be the default starting point.
Do not panic and stop treatment abruptly. Even psychotropics that do not carry any recognised acute discontinuation symptoms (for example, lithium) carry a high risk of relapse if discontinued abruptly, especially when lithium is used in the treatment of bipolar disorder. At this stage the patient is likely to be well in to the first trimester and drugs that have particular first trimester issues may well have done any damage if indeed they were ever going to. So abrupt cessation may offer no advantage. Many scans and tests can now be done to check on potential foetal harm and your obstetric department may have links and networks with mental health services which can facilitate joint working. If not, pharmacy personnel working in the respective services can informally network to optimise patient care. Specific information on psychotropic medication covering use during pregnancy and lactation can be found on the websites listed under resources. The local specialist mental health pharmacist is able to provide more details of local arrangements for accessing the choice and medication website. Many patients may have already done internet research of their current meds, spoken to other healthcare professionals and, depending on these and other influences, may need time to work through their options. Allow for the patient changing her mind. Shared decision making is key.
Initiating psychotropics during pregnancy
Some mental health conditions may present for the first time during the perinatal period and depression is a good example, so your involvement may be to help select a suitable antidepressant or other psychotropic agent. More specific information and nuances within the various drug groups are provided later in the article and summarised in Table 1. The National Institute for Health and Care Excellence (NICE) guidelines on antenatal and perinatal mental health provide treatment pathways for pharmacological selection and SSRIs are realistically the first line option in depression. For patients who want to minimise medication use it may be possible to trade some antidepressant pharmacology for high intensive psychological intervention (this is usually cognitive behavioural therapy). Any relapse is likely to require medication but consider electroconvulsive therapy not only for severe depression but also for mania and catatonia.5 It is important to review drug doses because secondary pharmacokinetic changes occur during pregnancy. These include increased volume of distribution, increased renal blood flow leading to increased glomerular filtration rate and drug elimination. With liver enzymes, CYP3A4 and CYP2D6 activity is increased while CYP1A2 activity is decreased.6 For drugs with a narrow therapeutic index or heavily reliant on one particular cytochrome enzyme for metabolism, then dose adjustment may be required. With respect to lithium, a dose increase may be required during the second and third trimesters due to increased volume of distribution.
Specific drug groups
Traditionally the psychotropic drugs considered ‘red flag’ for use during pregnancy are valproate, carbamazepine, lithium, clozapine and benzodiazepines, but even they should not be seen automatically as absolute contra-indications if the mother’s positive mental health cannot be achieved without them. Lithium
Used as both a mood stabiliser and to augment antidepressants employed in unipolar depression, lithium remains a common agent within mental health.
It presents medicines management issues across all trimesters. Ebstein’s anomaly, which is a cardiac defect where the tricuspid valve is displaced towards the right ventricle, is associated with lithium use during the first trimester but incidence is now believed to be lower than early studies reported and current incidence is estimated at 1 in 1000.
This is because the early studies did not allow for other confounders.30 It remains a preferred option to avoid lithium during the first trimester where possible but during second and third trimester treatment optimisation may involve a dose increase as volume of distribution (Vd) increases. From week 36 onwards, it is recommended that measurement of lithium levels is undertaken weekly.
Lithium is routinely stopped for around 12 hours before delivery to avoid electrolyte and other physiological changes complicating treatment. Post-partum, original treatment doses should be re-instated.
Stimulants
Studies on the impact of stimulants during the perinatal period show that methylphenidate use during the first trimester is not associated with any increased risk of major congenital malformations.31 For amphetamines, data taken from a large cohort study suggest no increased risk of malformations.32
Animal studies have shown adverse foetal effects with atomoxetine at high doses but there are no human studies to establish the safety of atomoxetine in pregnancy. If atomoxetine is to be used, then the minimum effective doses should be employed. Some patients may be slow metabolisers so any clinical signs of dose-related adverse effects should prompt a review.33
Substance misuse agents
Historically methadone has been used as the opiate substitute treatment during pregnancy but there is growing evidence to support buprenorphine as a realistic alternative, both in terms of safety and also reduced duration of neonatal abstinence syndrome. At this stage, there is not enough compelling evidence to suggest switching methadone-stabilised patients over to buprenorphine.34 During pregnancy methadone pharmacokinetics are likely to change because CYP1A2 becomes downregulated, so careful checking on maintenance doses is required.
Direct data on naltrexone in pregnancy are lacking but normal birth outcomes for a small number of patients exposed to a naltrexone implant prenatally have been reported.35
Introducing naltrexone during pregnancy should be avoided because opiate withdrawal increases the risk of neonatal distress, spontaneous abortion and premature labour and delivery,35 as well as compromising any opiate-based pain relief that the mother may require during labour and post-partum.
Term and post-natal considerations
Most psychotropic drugs are continued uninterrupted during pregnancy but any increased doses should be returned to original treatment doses immediately post-partum. There is a high risk of relapse in the immediate post-partum period in some mental health conditions. For example, in women with a Bipolar 1 diagnosis, the risk of a manic episode is 23-times higher than in controls. For any new mothers developing a mental health condition requiring treatment, consideration may need to focus more on implications for breastfeeding. When it comes to ‘red flag’ drugs, carbamazepine, clozapine and lithium are the principle ones to avoid. Some authorities recommend that breastfeeding be timed to match when plasma – and, by implication, breastmilk – levels are at their lowest but this practice has been questioned as impracticable and unnecessary.36
Neonatal considerations
Alongside background morbidity in the newborn, exposure to certain psychotropic agents can be predictive of more focused neonatal monitoring and follow up. More generally, the impact of psychotropics on speech and language development remains controversial and studies recognise many confounders. Table 2 identifies some specific monitoring that may arise from particular psychotropic use.